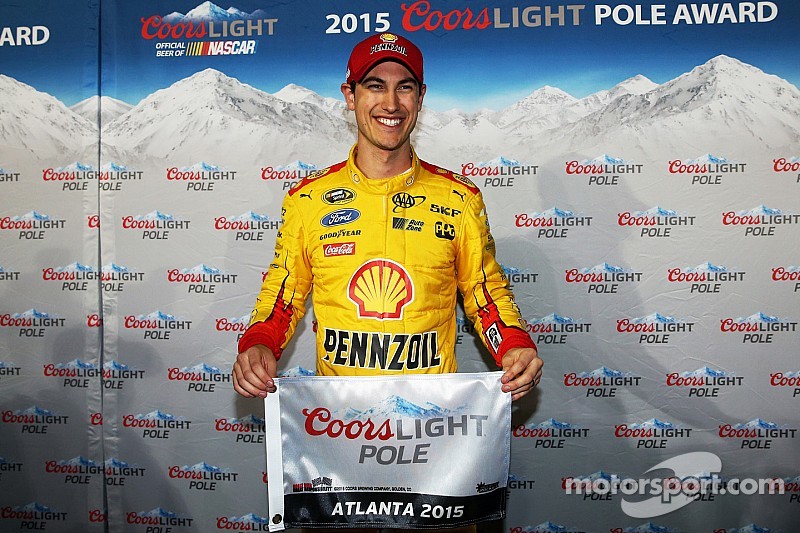 Team Penske driver will lead the field to green in Sunday's Folds of Honor 500.

Logano posted a lap of 194.683mph on his third lap to earn his ninth career Sprint Cup pole – his first at AMS.

“Hope we finish were we start,” Logano said. “It’s been an amazing few weeks if you think about the Daytona 500 and everything that comes along with that, and then coming down here to Atlanta and starting first is special, especially for me here at this race track.

"I remember sitting in the corner and watching drivers up here talking about their qualifying run and racing Legends cars out front here for years, so there are a lot of memories here.  You guys see the picture over there when you walk in with David (Ragan) and Reed (Sorenson) when we were young and racing here.

“Obviously, anything to be in victory lane here is a very special place for me.  I don’t know what’s going on lately.  Everything is going well and we’re just trying to keep the old train rolling here.  It’s going great and we’ll see what happens on Sunday.”

The room of doom

Only 34 of the 47 cars entered made started the first round of time trials due to delays in inspection – including many which had cleared the laser platform on Thursday. Rear camber seemed to be the overwhelming problem.

Gordon said the system was flawed.

Yes we are pushing limits, but there is something wrong here.

“I'm embarrassed; I'm embarrassed for our series right now that this just happened. I'm really upset for my sponsor 3M that just came on for this weekend where we didn't even get a chance to qualify.  We are just fortunate - I'm assuming we aren't going home because of points from last year. I know there are a lot of teams out here that aren't going to be that fortunate.  I hate it for these guys that work so hard. We were excited about qualifying today. I thought we had a great shot at being up front. This is absolutely ridiculous."

Sprint Cup Series director Richard Buck said NASCAR would review the procedure and do what they could “to make it right” in the future.

We did see an area in the laser inspection station where teams were pushing it – and that’s their job.

“We saw different areas where teams were trying to push the limits,” said Sprint Cup director Richard Buck who felt most teams were looking for additional grip. “We were open all day yesterday in the laser inspection station in the testing session. We had quite a few cars that came through.

"We did see an area in the laser inspection station where teams were pushing it – and that’s their job. They’re trying to get every bit that they can. Our goal is to make sure everyone has a fair opportunity to get through there so our focus was to make sure that we were able to run every car across there at least once to give them an opportunity and that’s what we did.

“What you saw was everybody pushing the limits.”

In the first round, Logano topped the chart with a speed of 194.240 mph followed by Hamlin, Edwards, Kyle Larson and Martin Truex Jr. Logano swapped positions with Harvick in the second round, with a lap of 194.118mph. Hamlin, McMurray and Dale Earnhardt Jr. posted the five fastest times.

Logano, who selected 47th in the draw – the position teams randomly select for technical inspection and qualifying, could have easily put the No. 22 Pennzoil/Shell Ford in a precarious position. Fortunately, Logano’s car passed the laser inspection measurement on the first time through the bay.

I’m sure we’ve learned from the experience and we’re gonna change something.

“That was our original time, so without that 20-minute delay we would have been late getting out there, and if we didn’t make it through the first round in tech, we wouldn’t have qualified,” Logano said.  “We would have been in the same boat as everybody else.  I think you’ve got to be able to have the opportunity to go through there twice.  I’m sure we’ve learned from the experience and we’re gonna change something.

“Obviously, this is not acceptable.  I’m sure we’ll make the right decisions moving forward to make sure it doesn’t happen again, but it is scary.  A lot of times when you roll through the laser platform, and especially looking at it now and saying, if you didn’t make it through, you wouldn’t have even qualified.  That’s scary, especially for the go or go-home cars.  Imagine you’ve got to go and you don’t even get to go.  That’s a tough situation.  I’m sure we’ll make the right decisions to fix that and we’ll move on.”