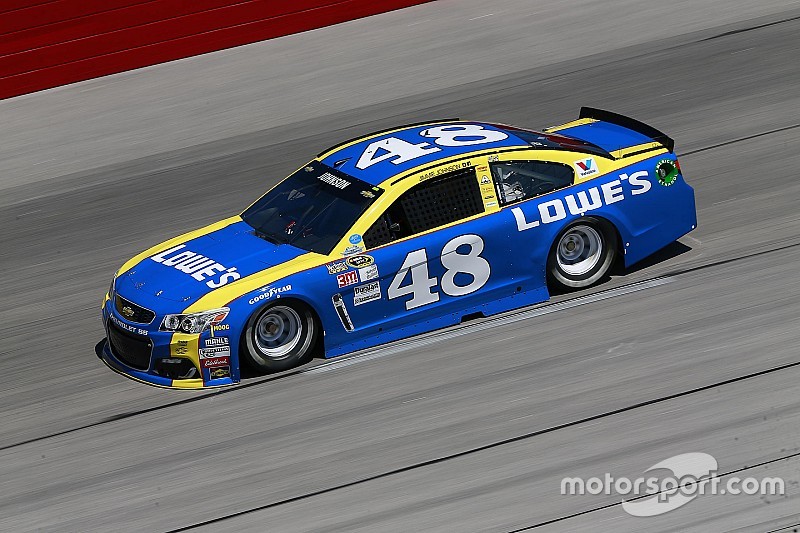 Thirty-nine teams worked on race setup at Darlington Raceway on Saturday after qualifying was cancelled due to a drive-by from Hurricane Hermine over South Carolina.

Once competition resumed, Jimmie Johnson posted a fast lap of 176.025mph (27.937sec) in first practice. Sporting a blue and yellow paint scheme reminiscent of one designed for Dale Earnhardt Sr. in 1979, Johnson completed 42 laps during the 85-minute session on Saturday morning. He was also posted the top speed in the Best 10 Consecutive Lap Average category -- 173.389mph.

“The respect Darlington commands is incredible,” said Johnson, who is looking for his fourth win at the 1.33-mile oval. “It’s a tough track -- hence the name it's given -- and she requires a lot of respect.

“I’m pumped to run the throwback scheme. This is the second year and it’s so cool to walk through the garage and see the creativity that all the teams and sponsors have put into the weekend. Every year I see it getting better and better.”

Thirty minutes into the session, Blaney was posted by NASCAR for running on the racetrack sans gloves. The driver of the No. 21 Ford adjusted his attire and returned to the track. Twenty minutes later, Brad Keselowski, who posted the sixth fastest lap (174.488mph), earned his first Darlington stripe of the day.

Although Harvick ended up 11th on the speed chart in single lap runs, several drivers — including Elliott, Carl Edwards and Clint Bowyer — inquired about his line around the track. However, with three minutes remaining in the session, Harvick came over the radio and told the crew he didn’t understand why his car was shaking so bad.

Gordon, who is subbing for Dale Earnhardt Jr. this weekend in the No. 88 Chevy, described his ride as “pretty comfortable”. He was 14th on the speed chart (172.802mph). Gordon leads all active drivers with seven wins at the track.

Bowman: "It's crazy" to get more races than Gordon as Earnhardt's sub

Chase Elliott on missed win opportunity: "Your only option is to move on"