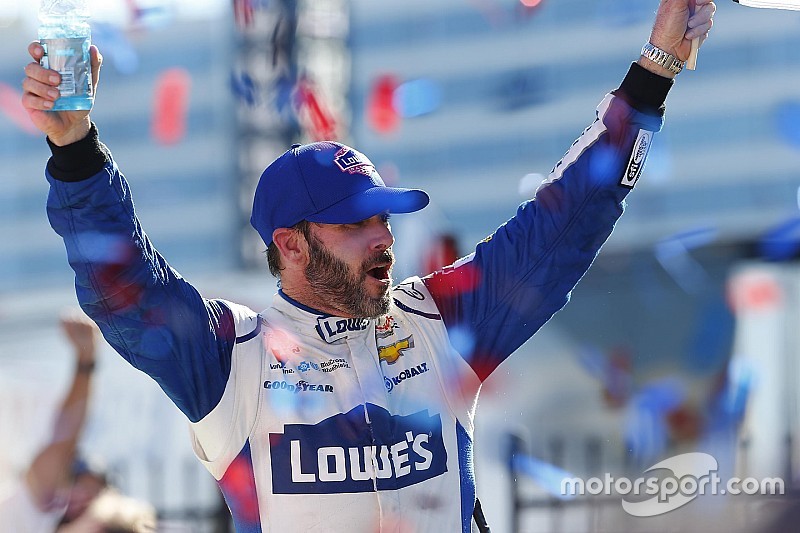 After Johnson laid down a burnout to celebrate his 78th career Cup victory, crew chief Chad Knaus came over the radio and said, “I didn’t realize you still knew how to do that.”

"We had our work cut out for us,” said Kahne, one of five non-Chase drivers to finish in the top 10. “We avoided those wrecks, that was tough on a lot of those good teams.”

The first race in the Round of 12 proved costly for several Chase drivers.

Joey Logano was the first playoff contender with problems when he hit the Turn 1 wall on Lap 117. Logano, the defending winner of the Bank of America 500, started 10th and was running as high as third before his right-front tire popped. Although he continued on, his second accident on Lap 155 was more severe. The left-front tire popped on the No. 22 Ford and Logano hit the wall in roughly the same area.

“Once you hit the wall once, it kind of throws the front-end geometry out of line and that’s probably what screwed up the second one for all I know,” said Logano, who finished 36th. " Who knows? I know it hurts a lot when you hit the wall that hard, but I’m glad I’m alright.”

Just as Logano’s issues came to a head, Kevin Harvick lost power on the No. 4 Chevy due to a faulty oil pump. Harvick completed 155 laps before pulling onto pit road.

“No, it just suddenly shut off and the things that it points to are no oil pressure,” said Harvick, who finished 38th. “It’s definitely not a power issue with the battery or anything like that.  They are trying to diagnosis it. I hate it for everybody on our Busch team they made some great adjustments today and got our car back where we needed to be to run up front and everything was going fine. Lots of things can go wrong and today they did.”

The race was slowed again for debris on Lap 229 and for the sixth time on Lap 253 when AJ Allmendinger hit the wall in Turn 3. But it was the restart on Lap 280 that eliminated two Chasers in one accident when Martin Truex Jr. punted Austin Dillon into the Safer Barrier at the end of pit road (Watch crash).

"I tried to give him a shove, I just turned him around like a damn idiot," Truex said.

Dillon, who moved up to second following a two-tire pit stop, finished 32nd.

“It just sucks,” Dillon said. “We will have to work hard the next two weeks to get the points back.   I felt like I got to third gear pretty clean and then the next thing – I feel contact and I am spinning through the grass. It’s part of it and we took two tires there and you know the risk when you get into it.  You just hope that doesn’t happen obviously.  I got to third without spinning the tires, and I felt like we got contacted. We will just go on to next week.”

Fourteen drivers were involved including Chase Elliott who had led 102 laps in the first 260 laps. Kyle Busch nailed Elliott in a chain reaction. Elliott finished 33rd.

The race was red-flagged for 10:48. Johnson led the field to green on Lap 266. Denny Hamlin triggered the eighth and final caution after his engine blew up coming out of Turn 4 on Lap 307. Hamlin, who was running second at the time, finished 30th.

Before the race returned to green on Lap 317, the leaders pitted for the final time. Kenseth was the first car off of pit road. When the race restarted, Johnson caught the No. 20 Toyota on the backstretch and took the lead coming out of Turn 4. He led the final 18 laps for his third victory of the season — and a five-point lead in the Chase over Kenseth.

Kyle Busch, Keselowski, Kurt Busch and Carl Edwards round out the top six in the standings.