Jimmie Johnson seems to be preparing for life after Chad Knaus 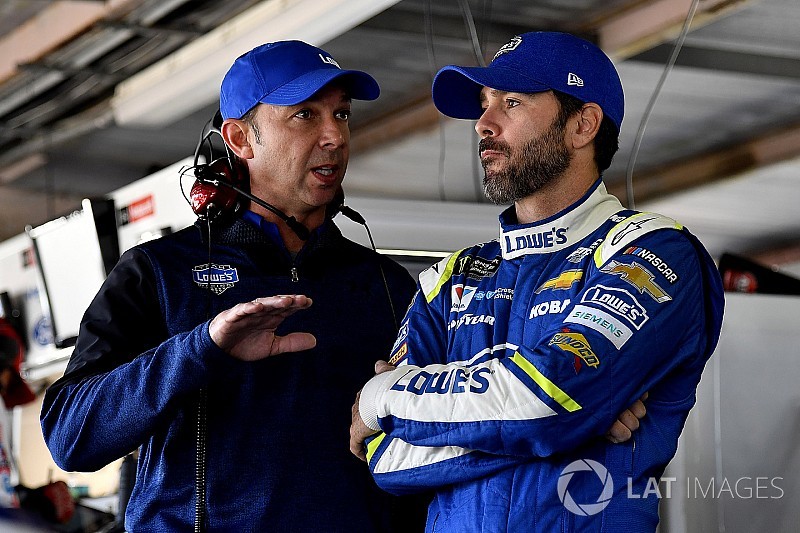 Jimmie Johnson sure sounds like a driver who is preparing for the possibility of having a new crew chief in the not-too-distant future.

But there was no announcement regarding his crew chief, Chad Knaus, who has worked with Johnson since his first full-time season in Cup in 2002.

During this week’s Charlotte Motor Speedway Media Tour, Johnson, 42, seemed unsure whether the duo would remain in intact until Johnson’s retirement.

“I feel like crew chiefs have always lived in dog years, and I’m not sure where he’s going to be. I think his contract is up at the end of this year,” Johnson said of Knaus. “Of course I want him to push on.

“I keep telling him, ‘Man, I started this with you, I want to finish it with you.’ I’ll try to stretch him as long as I can.

“I guess I’m trying to subconsciously prepare that he’ll assume a different role at Hendrick, but I really don’t want to let that in.”

Johnson did win three races mid-way through the season and qualified for the playoffs but his four top-five and 11 top-10 finishes were career lows as a full-time driver. He ended up finishing 10th in the series standings.

“We kept hoping every stone we turned over would help us find our problem. What was so frustrating is I’ve never worked so hard in my life to get such little return,” Johnson said. “I know Chad can say the same and the team can.

“The efforts they put in, just mind-boggling. I’m so happy I have a group of guys to do that, to do anything possible. It just so frustrating when you don’t get anything for it. So, that was tough.”

Allmendinger's confidence high ahead of Rolex 24 and Daytona 500