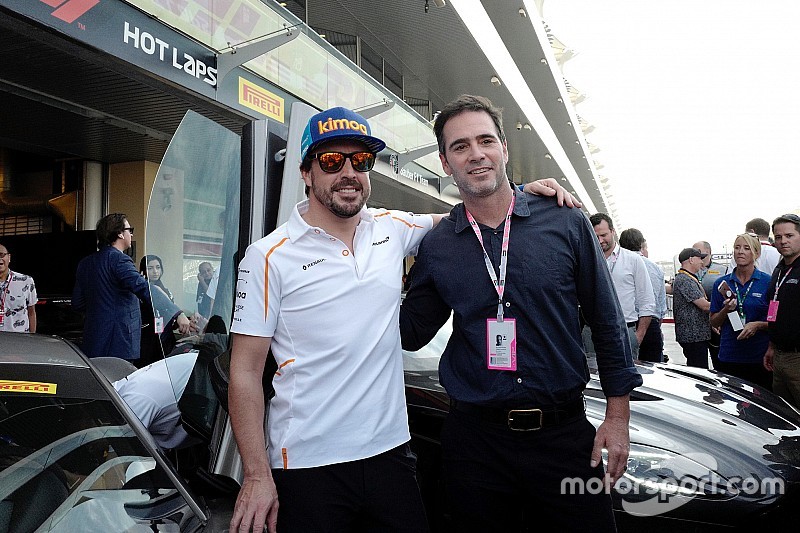 Jimmie Johnson has spent some time in a Formula One simulator this week and enjoyed the visit to Abu Dhabi but said he now “can’t wait to get in that car.”

Before arriving at Abu Dhabi to spend the weekend watching Fernando Alonso’s expected final race, Johnson stopped off in London, visiting McLaren’s headquarters and spent nearly six hours in the F1 simulator preparing for Monday’s ride away with Alonso.

“What an amazing place. The architecture and design of that facility was beyond impressive,” Johnson said of his visit to McLaren. “I got to turn some laps in the simulator for almost six hours the other day and I can’t wait for the real thing.

“Simulators are obviously no replacement for the real thing but they do help with the basics and baselines. I can’t wait to get in that car in Bahrain.”

Johnson will attend the F1 season finale on Sunday, then head to Bahrain International Circuit in Sakhir, Bahrain, for a day-long car swap with two-time world champion Alonso.

In Abu Dhabi so far, Johnson toured the F1 paddock, witnessed pit stop practice, qualifications, met with the media and participated in hot laps riding in a street car with Alonso. He also met up with Nico Rosberg and former Hendrick Motorsports teammate, Jeff Gordon, who was also onsite with Axalta Racing.

“The biggest difference is experience and amenities but at the end of the day, it’s about which car goes the fastest,” Johnson said. “So, from an esthetic standpoint there are differences but the engineers, drivers and concepts are totally the same.

“I sat on pit wall for practice and listened to Fernando on the radio and it took me back into my space, of course some of the language is different like oversteer and understeer but the concepts are the same.”

Members of Johnson’s No. 48 team are also in attendance as well as Alan Gustafson, crew chief for Chase Elliott in the NASCAR Cup Series. Gustafson was able to sit in on team engineering meetings with McLaren and will work with Alonso during his ride swap on Monday.

Johnson said he was “a massive Formula One fan” and said he had tremendous respect for the sport and what Alonso has accomplished in his career.

“There is such an energy around Fernando – his racing has been so celebrated over the years, he is such a legend,” Johnson said. “To see how this year has unfolded – we didn’t know of his retirement when decided to do this.

“So, to be a part of this huge weekend for him is just unbelievable. McLaren has been amazing.”

NASCAR Superlatives: A quick look back at the season