Jeff Gordon will have a special look for his final NASCAR Sprint Cup race at Homestead-Miami Speedway.

Jeff Gordon's 797th and final NASCAR Sprint Cup start will come at Homestead-Miami Speedway this November and his iconic No. 24 will feature a special paint scheme. You can watch the car be brought to life in the below video.

“It’ll be a big event for me – pretty emotional as well,” Gordon said of the special Axalta scheme. “But our sponsors wanted to do something a little special as well. So we’re going to look a little different in Homestead.” 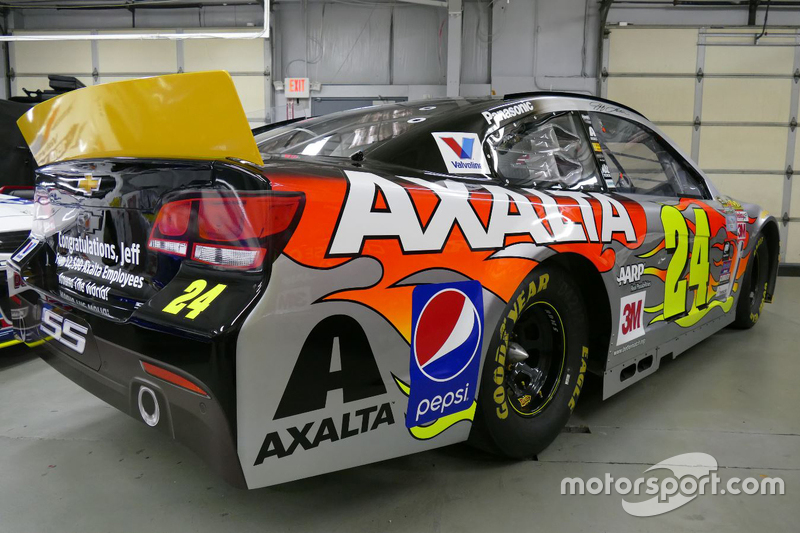 There are two liveries in particular that Gordon made iconic in his career. The original Rainbow Warriors car (which he ran at Bristol in August) and the flames that will be featured on his final ride.

“You know I can’t be out there on the racetrack in the Axalta car without some flames, so we’ve got to keep the flames,” he smiled. “But I love the silver. That is a sharp-looking race car.”

Looking to go out on top

At Chicagoland, he led 41 laps and was on the verge of a top five finish before a late restart spoiled his strong run, falling down to 14th place.

Gordon's legendary career started back in 1992, winning four championships. He is currently 12th in the Sprint Cup standings and looking for his first win of the season while also escaping elimination in the first round of the Chase.

“There are still nine more races left to go to try and win this championship and I’m certainly extremely encouraged based on how Chicago went – even though we didn’t finish well, we ran extremely good."

Gordon desperately wants that fifth championship - his fourth and most recent Sprint Cup title came way back in 2001. Even if he fails to capture the crown, Homestead will be a memorable day for the NASCAR icon.

“During that race and after that race it is only going to be a celebration. "It has been an amazing career. I just never dreamed in a million years that it would have gone the way that it has and while I’m just stepping out of it there will definitely be tears – they will all be tears of joy looking ahead at the future.”

Whose fault was Chicago clash: Kevin Harvick or Jimmie Johnson?

FLIR to support McMurray at Loudon