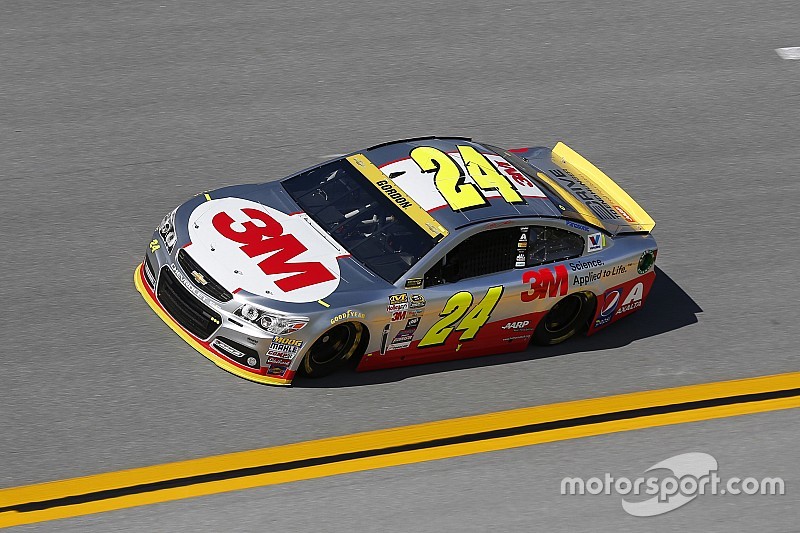 Gordon earned his fourth pole of the season and his third restrictor plate pole in 2015. His speed of 194.500 mph for the CampingWorld.com 500 enabled the four-time champion to win post his fifth-career pole at the 2.66-mile track.

"These guys work extremely hard," said Gordon after capturing his 81st career pole. "I know everybody does for these restrictor plate tracks. To be able to get the results like that and they have been doing it all year long on these tracks. That is just a complete credit to all the details that come from the top down.

Close, but no cigar

Dale Earnhardt Jr. was the eighth car on the track and cruised to the top of the speed chart (193.162 mph) only to be bumped first by Jimmie Johnson (193.584 mph) and then Matt Kenseth (193.580 mph) — the top Toyota qualifier. Earnhardt will start fifth.

“You mean to tell me you couldn’t find me a thousandth out there,” crew chief Jason Ratcliff said to Kenseth following his run.

“I found 20 of them out there,” Kenseth replied. “I expected you to find me one more.”

Trevor Bayne held the top spot early on (192.777 mph) before the Hendrick cars took to the track. Regardless of dropping to sixth, Bayne said it would not wipe the smile from his face.

In his final run at Talladega Superspeedway, Jeff Gordon was the 33rd car released and vaulted over his Hendrick teammates of Jimmie Johnson (193.431 mph) and Dale Earnhardt Jr. (193.392mph) with a lap of 194.255 mph for the top position in the initial round of time trials.

Matt Kenseth broke up the Hendrick party with a lap of 193.431 mph and hopped over Johnson on a tie-break but Kasey Kahne, the 40th car on the track, jumped to second on the speed chart with a lap of 194.050 mph. Kenseth, Johnson and Earnhardt rounded out the top-five qualifiers.

Martin Truex Jr.’s time was disallowed for going below the double yellow line. Truex posted the third best time during his qualifying run of 191.762 mph.

“I didn’t know you couldn't do that here in qualifying,” said Truex, who will start 43rd. “I didn’t get the memo.”

“We gave it all we had with the Haas Automation Chevy,” said Busch, who is currently third in the point standings. “Really proud of this team and how they’ve come together in the Chase.”

In a bizarre incident on pit road, Clint Bowyer backed into the nose of the No. 51 Chevy — ironically the car he’s signed up to drive next year — prior to leaving pit road. Bowyer qualified 29th, but Justin Allgaier’s attempt was delayed as the team made repairs to his car. When Allgaier was able to qualify the best lap he could muster was 39th.

All four SHR cars have to make changes in NASCAR inspection