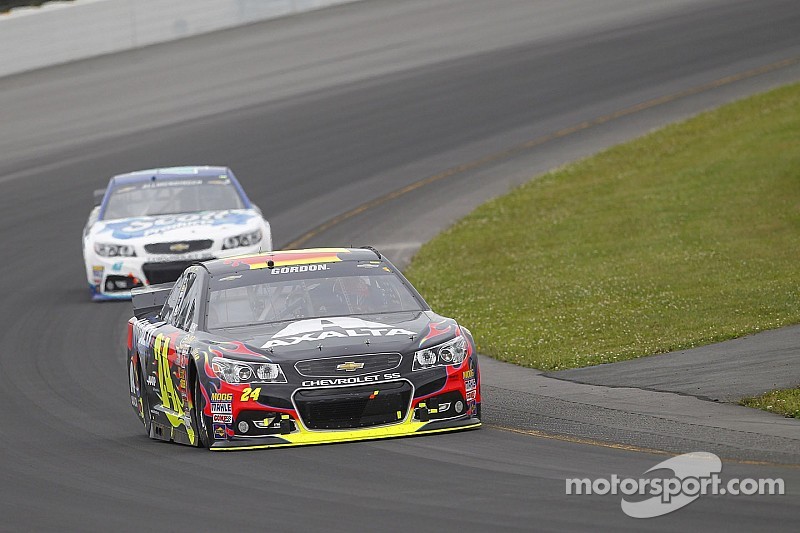 Gordon had just won the pole for Sunday’s Cheez-It 355 at the Glen.

WATKINS GLEN, N.Y.— When the second and final round of qualifying ended on Saturday at Watkins Glen International, Jeff Gordon climbed onto the window ledge of his No. 24 Chevrolet and raised his arms in triumph.

Gordon had just won the pole for Sunday’s Cheez-It 355 at the Glen (1 p.m. ET on ESPN), the 22nd NASCAR Sprint Cup Series race of the season.

In winning his third Coors Light pole award at the 2.45-mile road course and the 75th of his career, Gordon had beaten odds-on favorite Marcos Ambrose for the top starting spot in Sunday’s race.

I’ll be honest, I was real surprised with the lap (Ambrose) laid in the first session...

Gordon went out late in the 10-minute second session to post his lap at 129.466 mph (68.126 seconds). After Gordon made his pole-winning run, Ambrose didn’t have time to get back to the start/finish line and start another qualifying run before the clock ran out on the session.

Gordon’s late run in the second round wasn’t a strategic decision per se. It was a simply a matter of cooling his car after making two runs in the first round to ensure his advancement to the top 12.

“We have to make two runs in that first session, so when we made that second run, there was only a few minutes left in that session,” Gordon said. “We just had to cool everything down. There were two factors into when we went—cooling everything down, the tires and the engine, and then getting a clean lap.

“It just happened to work out that, when we were done cooling, it was a great time to go. There were no cars on the track.”

Gordon said he was surprised at how strong his lap was.

“I’ll be honest, I was real surprised with the lap (Ambrose) laid in the first session, so you can only imagine how surprised I was when I saw the lap time I had,” Gordon said.

Gordon’s lap also seemed to shock Ambrose, who was timed out before he could start a final run. But the Australian road course ace was gracious in giving the four-time champion his due.

“He’s a fantastic road racer, and I have watched a lot of races here where he dominated,” Ambrose said. “He’s having a standout year. You can’t discount anybody out there. Anyone in that top-12, if they had gotten the pole, I wouldn’t have been surprised.”

Jeff Gordon puts Chevrolet SS on pole at The Glen