Jeff Gordon: "I like the direction and changes that have been made"

Jeff Gordon, No. 24 Drive To End Hunger Chevrolet SS, met with members of the media at the 2014 NASCAR Daytona Media Day.

OBVIOUSLY THERE'S A LOT OF CHANGES THIS SEASON: CHASE, QUALIFYING, PENALTIES. WHEN YOU ADD IT ALL UP INTO ONE BIG PICTURE, DO YOU THINK THAT WILL BE A LOT FOR FANS OR PARTICIPANTS TO SWALLOW?

JEFF GORDON: Maybe. I think it's different when there's a lot of changes and some of them seem unnecessary. I like the direction and changes that have been made. 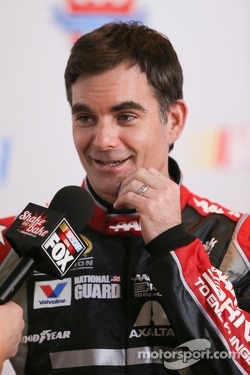 You brought up the penalties. I think that's a structure that's needed to take place for a while now. So I think if you have something that makes sense, why wait just because you've made other changes? So go ahead and incorporate that into there. We'll adjust, we'll deal with it. It's going to take some time to work through it for NASCAR as well as for the competitors.

Same thing with qualifying. I feel like we needed to do that a few years ago. When F1 started doing it, I was instantly a huge fan and said, Man, I wish we had this. I love that they're incorporating that.

Then there's a few little tweaks that probably are going to need to happen with that as well. I was real happy to see them being open-minded and them recognizing some things that needed to be done and they did that.

The points, you know, I like it as well. I mean, I think the thing that stood out to me in the conversations that I had with NASCAR that really resonated was when the driver gets out of the car and said, Well, you know, third place today, it was a good points day. That just doesn't sit well with anybody, not even us. I mean, we don't want to say that. We don't want to say anything other than, We won. If we didn't win, that was not a good day. It's win or nothing. That's the attitude you want to have.

It's not necessarily the reality, but getting us closer to that I think is important. I think this takes us that next step towards that, how important it is to win and the intensity level that's going to be created from qualifying for all of us, crew chiefs, drivers, teams, as well as, you know, the importance of winning to get in and how important it's going to be to compete at a high level and winning throughout the Chase.

COLLECTIVELY EVEN IF PEOPLE DISAGREED WITH ONE OR MORE OF THEM, WOULD YOU NOT AGREE THAT TOGETHER THEY ARE GOING TO DRAW MORE EYES?

JEFF GORDON: I believe that for all those that are complaining about it and saying they don't like it or will never watch another race, they'll be tuned in, okay? It's the ones that aren't saying anything that you're trying to grasp.

I have a lot of friends like in New York that are casual fans, and they're talking to me about it. I think they've already made an impact and I think there's a lot of interest around the things that they've announced. I think that interest is only going to get greater once we go through a couple of those qualifying sessions and go through one year of this points system.

WHAT DO YOU THINK RAY EVERNHAM IS GOING TO BRING TO HENDRICK?

I mean, I love Ray. Ray and I have obviously had a great working relationship, but we've also maintained a friendship over the years.

Ray is experienced in a lot of things: as a crew chief, as a car owner, as a businessman, TV producer. It can enhance what we do at Hendrick. I think it's important to have someone that has been in that position as a crew chief, maybe doesn't understand the engineering to the level today that some of our engineers go through, but he's a quick study, he gets it.

I think that anything that Ray can do to help bridge that gap of communication between crew chiefs, engineers, the engine shop, the chassis shop, the team aspect from pit crews, all these things, he just has a great way of looking at things, analyzing them and giving good opinions to make it stronger.

OF ALL THE ELIMINATION ROUNDS THAT ARE GOING TO HAPPEN WITH THE CHASE, THE GUY WHO ENDS UP WINNING IT, HOW SATISFYING WILL THAT BE? EVERY COUPLE RACES YOU HAVE ANOTHER ELIMINATION.

JEFF GORDON: You do. But, I mean, if you're leading the points, you're going to move on, right? You don't necessarily have to win a race, but you still have to compete at a high level.

The best teams know how to put themselves in position to have things go their way. I'm a big believer in if you're that talented, you're that good, you communicate that well, you have the resources, you're going to find a way, no matter what the system is, to rise to the top.

WE'LL SEE A LOT MORE GUYS RUN OUT OF FUEL?

JEFF GORDON: You'll see more people running out of fuel. You'll see I think a little bit more bumping and banging on restarts and closing laps. The cars are still really stuck to the racetrack. That aspect is a little bit unknown.

But definitely, you know, this heightens things up a bit.

THIS WILL BE THE 10TH SEASON FOR KYLE BUSCH IN CUP.

JEFF GORDON: Man, he's getting old. Is he considered a veteran now (laughter)? No longer the kid. Okay, good.

I WONDER HOW YOU'VE SEEN HIM EVOLVE OVER THOSE 10 YEARS (INDISCERNIBLE).

JEFF GORDON: He's got a good memory, a better memory than I do. I just remember poking my head in the window and just saying, Man, that's not really necessary right now. I appreciate what you're trying to do, but we don't need to be three-wide out there in practice. There's no good that's going to come from it.

Also I think back to when I was young and coming into this sport, we got some great young talent coming up right now, rookies. That's what I love about the young guys: their enthusiasm, their rawness. They're just like young kids: you never know what is going to come out of their mouth or what they're going to do.

It's the same thing when they get in a racecar at that level. They don't know exactly what to expect. They don't have all this experience that's sort of setting their mindset already for them. They're just fresh, pushing the envelope, doing things unique and different.

I mean, that was Kyle being Kyle. If you asked Kyle, Would you still go do that today, I would guarantee he would say, No, I don't see the benefits of it.

WHAT IS KYLE BEING KYLE NOW?

JEFF GORDON: I think Kyle has learned. He's still an aggressive driver, so it's just how to make the most of that aggressiveness at the right time. It's balancing the aggressiveness with patience.

I've always said that's what makes a great racecar driver, is somebody that has the ability to be super aggressive. Now, of course, Kyle, you can guarantee if he's behind you on a restart, he's going to go and dust the wall and make it three- or four-wide. You just know that's going to happen. He's done it very successfully, so why wouldn't he do it? He still has that in him. But it's not every single restart and every single lap.

The best story I have is Alan Gustafson, when he was his crew chief, the frustration I could see on his face in debriefs or drivers meetings because they only got to practice half of the practice because the other half they were fixing the damage on the right side because Kyle constantly hit the wall, just brushing it. Darlington, boom. Richmond, boom. That shows you how far on the edge that Kyle was pushing it.

Now he does it once in a while but not every weekend.

HOW DOES THAT FARE FOR QUALIFYING AND THE NEW CHASE FORMAT FOR THE YOUNG GUYS?

JEFF GORDON: Well, I'm a big fan of Formula One. I watch it, especially qualifying. I watch it very closely. One of the challenges that they have is trying not to block. They don't always do it intentionally. It's unintentional most of the time. Sometimes it's, I'll slowly get out of the way. There's some judgment calls there. They only have 22 cars out there and we have 43.

There's going to be weekends like Martinsville where if the conditions are right, the sun is coming, there's a cloud, everybody is going to want to be out there on the track and you're not going to get a clean lap.

I think for somebody who's young, it's going to be respecting the competitors and knowing how to best make your lap happen and then not get in the way of somebody else's lap. That's going to be true for the veterans as well. I think we're experienced at doing those qualifying runs in practice where we don't pull up on the track in front of somebody.

It's not sometimes the drivers, it's the spotters as well that are playing a big role in that.

WHAT ARE YOUR FEELINGS ABOUT SEEING THE NO. 3 CAR OUT THERE AND HOW DO YOU THINK IT WILL BE PERCEIVED BY FANS?

To me it just came down to when Richard was comfortable with bringing it back, what was the right time and the right driver. I think obviously Dale, Jr. could have pulled that off. But I think that Richard's done a great job being very respectful of it. I know how much he cared about Dale. That's extremely important to him.

Knowing that it's his grandson, how he's been really making a name for himself, I think that's cool, it's exciting.

DO YOU THINK THAT WILL HELP WITH ACCEPTANCE FROM THE FANS?

JEFF GORDON: Absolutely. And that it's Richard Childress Racing and a family member.

WHAT KIND OF CHALLENGES, PHYSICAL AND MENTAL, DO YOU THINK TONY STEWART IS GOING TO HAVE COMING BACK?

JEFF GORDON: I think the biggest thing is just how long he's been out of the car, how quick things changed from an engineering standpoint.

But, you know, I've not talked to Tony as far as what kind of physical shape that he's in. Heck, he might be in better shape than he's ever been because of the physical therapy. I don't know. I haven't asked him what it's like to push on the gas pedal, if there's still pain involved. I haven't talked to him about those things.

There's certainly going to be some challenges. But he's Tony Stewart. I'm not overly concerned with the challenges that he's going to have from being able to either withstand some pain or get up to speed and be a fierce competitor.