Jeff Burton, behind the wheel of the No. 31 Cingular Wireless Chevrolet, will lead the field to the green flag for the Daytona 500 next Sunday. It is Burton's first pole at Richard Childress Racing: the last time Burton started in the top spot was ...

Jeff Burton, behind the wheel of the No. 31 Cingular Wireless Chevrolet, will lead the field to the green flag for the Daytona 500 next Sunday. It is Burton's first pole at Richard Childress Racing: the last time Burton started in the top spot was Richmond in September of 2000. 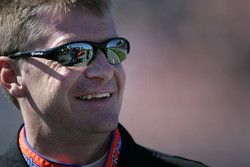 Jeff Burton.
Photo by Eric Gilbert.
"We just got lucky," said Burton. "That's the best wind we've had down here in all of testing and everything else. It just played in our hands and we had a car that could take advantage of it."

It's a turnaround for the RCR teams, who all struggled last season, each of the organization's three cars now posting times in the top 13.

"I think we have put some things in place to make a lot of noise," Burton said. "I think we have great race teams and drivers and some of the best people in the business. We'll see what we can do with it. But there are a lot of obstacles that stand in the way of success and we've got to make sure we step on top of those and work real hard."

Defending Daytona 500 winner Jeff Gordon grabbed the outside pole, "I am really excited about being on the front row. With the wind and the conditions you never know if you are going to be able to pick it up or not. I am just really excited. It's important to get on that front row and have a spot locked in."

Burton and Gordon are the only two cars that have locked their spots for the Daytona 500. The remainder of the field's starting positions will be determined by the Gatorade Duel 125 races next week.

"I knew the car was running strong," said Johnson. "I'm glad we had a good lap out of it. I'm very proud of all the guys at Hendrick Motorsports and how hard they have all been working - especially this Lowe's team."

Matt Kenseth did not even get up to speed before a tire went flat on the No. 17 Roush Ford. Since, Kenseth had already taken the green flag he was not able to attempt a lap at full speed.

"Right when I took the green the left-rear tire just exploded for some reason," Kenseth commented. "Robbie (Reiser, crew chief) said he thought it looked low when we left and it did spin a little funny when I left pit road, but it was so cold out that I didn't really think much of it. Once I crossed the start-finish line I just exploded the tire and it was too late to do anything about it then."

"It's about what we probably expected," explained Earnhardt. "All the cars at DEI don't have a lot of speed on their own, but they've got good motors and good bodies on them for the race. So, it's a little disappointing. We like to qualify better but obviously, we're not too concerned."

Notably, the Budweiser Shootout which was washed out Saturday night will be conducted this evening beginning at 4:42 PM.