If Biffle can't compete, "then I'm probably going to do something different"

For Greg Biffle, 2016 has been a long, trying season. And that's just for starters. 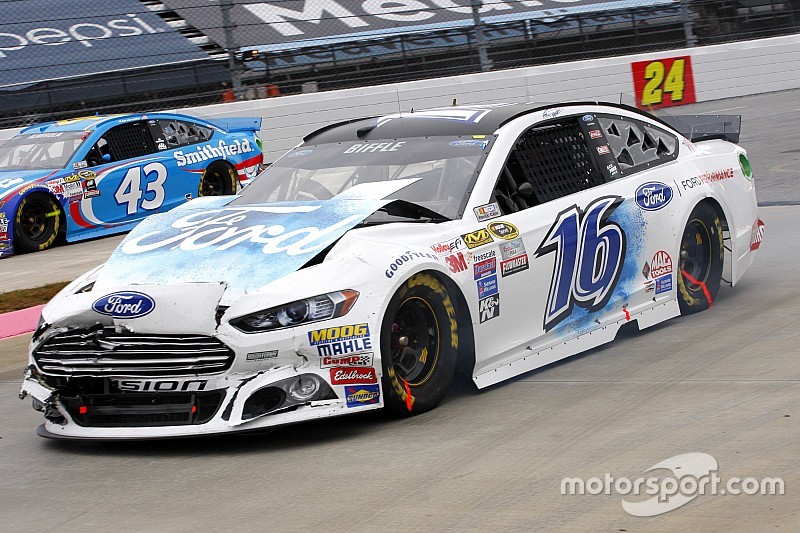 The problem is that the "trying" hasn't brought the success Biffle expected when the season began.

The Roush Fenway Racing lifer won titles for team owner Jack Roush in both the Truck and Xfinity Series before embarking on a 15-year stint behind the wheel of the No. 16 Ford in the Sprint Cup Series.

I want to be competitive in races and run in the top 10. That's my goal and my focus.

The 46-year-old Vancouver, Washington native has endured the highs and lows of NASCAR. In addition to his two championships in the lower tours, Biffle has earned 19 wins, 92 top fives and 175 top 10s in 504 Cup starts. He hoped to be the first driver to win NASCAR’s triple crown -- championships in all three national touring series -- but his best career-finish was second in the Cup standings in 2005 — after Roush won consecutive titles with Matt Kenseth (2003) and Kurt Busch (2004).

Not the season he was hoping for

After re-signing with RFR in 2014, Biffle hasn’t sniffed the Chase for the Sprint Cup in the last two seasons. He thought 2016 might be the year. With a new crew chief in Brian Pattie, a lower-downforce aero package from the sanctioning body and a renewed effort at Roush, things appeared to line up for NASCAR’s elder statesman.

“Brian and I have a good relationship and you are always hoping for miracles, right? We needed some intervention,” Biffle told Motorsport.com. “We needed to go in a different direction at our company and try to bring some outside information in. Brian is only one guy and only able to bring so much information with him. We did add a few other engineers and mechanics but he has overall made an impact for all the teams.

“I think that was clear at the beginning of the year. He can’t run everything. I think that in the middle of summer we may have gotten behind a little on aero development and some of the other teams might have been a little better than we were. Brian has done a tremendous job on the team itself. It has taken up until now to really get integrated into the Roush Fenway system and how we operate.”

And now, he’s 24th in the standings with just one top-five finish, at Loudon. Yes, Biffle earned his 13th career Cup pole at Daytona International Speedway in July and finished eighth. Considering that was the venue where Biffle won his first Cup race as a rookie in 2003, it’s not surprising that he needs more to challenge him on Sundays.

The sun setting on Biffle's career?

So when Biffle said his most recent contract might be his last, it’s understandable.

“Well, if I talk to you Sunday after the race in here, maybe that will be some inspiration,” Biffle said in the media center where the winner is interviewed following the race. “I want to be competitive in races and run in the top 10. That's my goal and my focus. If I'm not doing that, then I am probably going to do something different.”

Biffle appeared to be turning his season around mid-year when he posted three consecutive top-10 finishes. He was 15th fastest in single lap runs on Friday at Kansas Speedway when the team was dialing in its qualifying set up. Similar to Daytona, Biffle has a solid record at the 1.5-mile track where he won in 2007 and 2010. His average finish of 12.1 ranks sixth-best among current competitors.

Biffle has been rumored to be leaving Roush Fenway Racing at the end of the season. Although he owns the building that headquarters HScott Motorsports in North Carolina, Biffle said he has not discussed racing for Harry Scott after Clint Bowyer leaves in November. Biffle has heard the rumors that he’ll end up and Front Row Motorsports — a technical partner — but given his loyalty to Roush over his career, that's unlikely to be something he’d consider.

Still, it would take something more promising — and competitive — to pique his interest in continuing down the current path.

“I spend a lot of time and won a lot of races, running in the top-five and top-10, Biffle said. “A race car driver knows and understands he isn’t going to run there every weekend. That's obvious. Carl Edwards, Jimmie Johnson – I actually get some humor out of when you listen to media or TV about how Jimmie has the sky falling in and they are terrible because he hadn’t won in so many races or something like that.