How bad do you want it? 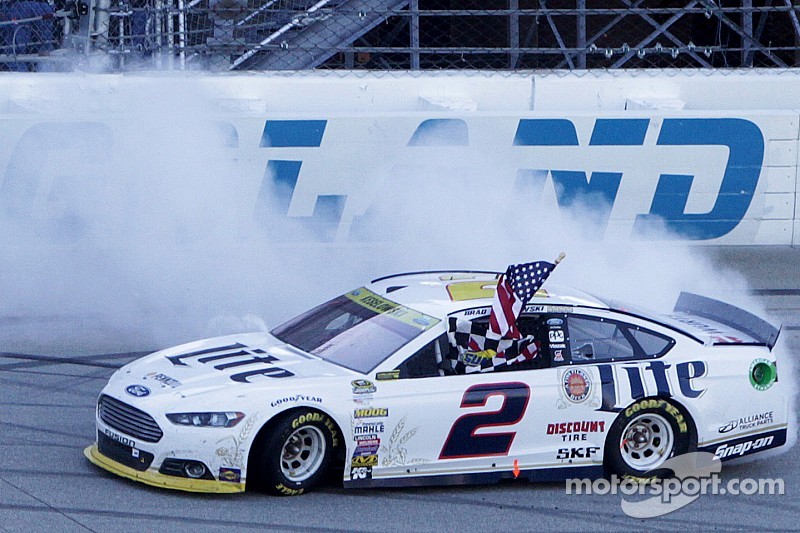 In Sunday’s race, the best of the Chase for the Sprint Cup contenders persevered in the face of adversity.

Certainly, the decision by No. 2 Team Penske crew chief Paul Wolfe and Brad Keselowski to return to pit road to fix a loose left wheel, following the stop for service on Lap 183, was a gamechanger for the team.

Sure, Keselowski sacrificed 15 positions to make the repair but the he had the car, the team and the talent to recover and win.

Brad is certainly a thinking‑man's driver.

“I think the word we're using is 'big picture',” team owner Roger Penske said after the race. “I said that to Brad before the last restart, what we didn't want to do is run as well as we had and end up in the fence somewhere.

“Brad is certainly a thinking‑man's driver. He has confidence in Paul, Brian (Wilson, race engineer), the whole team. I think when he went back, he said, ‘Look, let's go’. He knew he had a fast car. In some ways, that keeps his mind focused.  Running up there fighting with the 4 (Kevin Harvick), the 42 (Kyle Larson), running up there, gave him confidence how good the car was.  When it was time to go, he was really in position to make a move.”

And what a move it was when Keselowski powered the No. 2 Ford between the two Chevys coming off of Turn 2 for the lead on lap 252. Although it took 65 circuits to regain the lead, Keselowski showed the resolution of a champion who wants his career to be defined by more than one title.

What was equally impressive was the eighth-place finish by Kurt Busch and the No. 41 Stewart-Haas Racing team.

It’s clear that Kevin Harvick has been declared the alpha driver in the SHR stable. With two wins this season and a tremendous display of speed throughout the year, it appears the company’s support (and its’ best pit crew) has been thrust behind the No. 4 team in the Chase.

Yet Busch’s determination on Sunday displayed his unwavering desire to be considered a legitimate playoff contender. Busch was running 10th when he entered pit road hot, spun and received a commitment line violation on Lap 45.

We'll get it back.

“We hit the commitment cone,” Busch told the team. “Sorry about that. It’s not what we needed. Too much rear break.”

Busch fell off the lead lap after serving a pass-thru penalty and dropped to 30th. He promised his team, “We’ll get it back.”

It took a lucky dog (Lap 100) and a total of 90 circuits to climb back into the top 15. Busch was 11th on the Lap 237 restart. He was looking to climb into the top 10 when he made contact with his brother Kyle and damaged the right side of the car.

The elder Busch lucked out when Clint Bowyer ignited the fifth caution on Lap 244 which enabled the No. 41 Haas Automation Chevy to pit for repairs. Busch lined up 15th for the restarts. He pitted once more for adjustments following the altercation between SHR teammate Danica Patrick and Ricky Stenhouse Jr., then lined 13th for the final six laps and finished eighth.

Busch tied Denny Hamlin (sixth) for the most green flag passes throughout the race – 109 over 267 laps.

Every spot is so crucial.

“I made a mistake early on trying to get on pit road trying to get all I could,” Busch said. “It was as if I was going to pass 15 cars and go to the lead all at once. I spun her around; it was a bad mistake on my part. We spent two-thirds of that race digging out of that hole. We spent the last one-third racing hard.

“I felt like we were in the mix, racing our Haas Automation Chevrolet with the frontrunners. We got up as high as fifth or sixth on the final restart but fell back to eighth. Every spot is so crucial. You can see how everybody is racing. I had a great time out there racing hard carrying the weight of the team after I made my mistake.”

Busch is ninth in the point standings. He has three wins at this weekend’s race at Loudon and one victory at Dover. And if Busch can continue to “carry” the team as he did at Chicagoland, transferring to the next Chase round should be a breeze.

Why did Logano's engine blow as he crossed the finish line?

Sunday’s race was a microcosm of the Chase