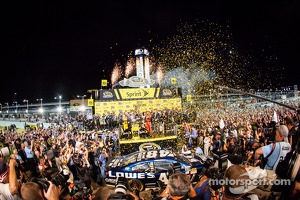 11TH TITLE FOR HENDRICK: Johnson’s 2013 Sprint Cup title is the 11th for Hendrick Motorsports and car owner Rick Hendrick. Hendrick is the all-time leader in Sprint Cup owner championships and remains the only owner to win titles with three different drivers: Johnson (6), Gordon (4) and Terry Labonte.

NEVER STOP IMPROVING: Lowe’s has been the primary sponsor for Johnson since the No. 48 team’s inception in 2001. Since then, the home improvement retailer has been on board for all six Sprint Cup championships, 66 victories and numerous milestones, including two wins in the Daytona 500 and four in the Brickyard 400. Hendrick Motorsports’ relationship with Lowe’s is one of the longest-running driver-team-sponsor partnerships in NASCAR.

KNAUS SETS THE STANDARD: With six career Sprint Cup championships, crew chief Chad Knaus ranks second all-time behind only Hall of Famer Dale Inman, who has eight Cup titles as a crew chief. Knaus holds the distinction of being the only crew chief to win more than two Sprint Cup titles in a row, a feat he accomplished when he coached the No. 48 team to five straight from 2006-2010.

KNAUS’ CAREER: Knaus has led the No. 48 team since Johnson’s rookie season in the Sprint Cup Series in 2002. In that 12-year span, he has helped Johnson achieve six titles and an average finish of 2.4 in the championship standings. The duo never has finished lower than sixth in Cup points.

HALL OF FAME VOTE: Johnson will be the first active athlete to have a say in his sport’s Hall of Fame voting process. He will cast a ballot for the 2015 NASCAR Hall of Fame class thanks to a new provision that includes the reigning Sprint Cup champion in the process.

CHAMPIONSHIP STREAKS: Prior to Johnson's run of five consecutive Sprint Cup titles from 2006-2010, Hendrick Motorsports scored four in a row from 1995-1998 with Gordon (1995, 1997 and 1998) and Labonte (1996). No other organization has won more than three Sprint Cup championships in consecutive seasons.

WINNING PERCENTAGE: Hendrick Motorsports is the most efficient team in major American professional sports, earning 11 titles since its inception in 1984 for a 36.7 all-time title-winning percentage. The Boston Celtics rank second with 17 NBA titles in 67 seasons (25.37 percent), while the Montreal Canadiens are third with 24 Stanley Cup titles in 95 seasons (25.26 percent). The New York Yankees rank fourth with 27 World Series championships in 113 seasons (23.89 percent). Hendrick Motorsports has won 11 of the last 19 Sprint Cup championships (1995-2013), putting the team's title-winning percentage during that span at 57.9.

SINCE 1984: No other major American professional sports team has earned more championships than Hendrick Motorsports since 1984, the organization's inaugural season. In that time, the Los Angeles Lakers have earned eight NBA championships and the Chicago Bulls have recorded six. Both the New York Yankees and Edmonton Oilers have tallied five titles apiece since 1984.

ROAD WARRIOR: Apart from Johnson and Knaus, car chief Ron Malec is the only member of the No. 48 Lowe’s team who has been on the road crew for all six championships. Malec started working as a mechanic with Johnson in the ASA Series in the late 1990s. When Johnson joined Hendrick Motorsports, Malec also came on board. As car chief, he manages the crew members who work on the car both at the shop in Concord, N.C., and during the race weekend. He is responsible for the preparation of the race car and seeing it through technical inspection.

STILL ROLLING: Hendrick Motorsports never has run a Sprint Cup campaign without winning a pole position, recording at least one in 30 consecutive seasons (1984-2013). The team scored seven in 2013, including three from Johnson, two from Dale Earnhardt Jr. and two from Gordon.

ANOTHER ONE FOR CHEVY: Chevrolet captured its 37th Sprint Cup manufacturers' championship and 11th straight this season after winning 15 races. Johnson led all Chevy drivers this year with six victories, including the 2013 Daytona 500, as he helped the manufacturer record its first title with the Chevrolet SS race car that debuted this season. Kasey Kahne contributed two victories to the total, while Gordon recorded one.

YEAR IN REVIEW: For the second straight season, all four Hendrick Motorsports drivers were contenders in the Chase for the NASCAR Sprint Cup. The organization posted nine victories and seven pole positions as its drivers finished inside the top 12 in the championship hunt. Johnson finished first, followed by Earnhardt (fifth), Gordon (sixth) and Kahne (12th).

30TH ANNIVERSARY: Next season, Hendrick Motorsports will celebrate its 30th anniversary in NASCAR. The organization began in 1984 with five employees and 5,000 square feet of work space. It has grown to more than 500 employees with a 430,000-square-foot facility that sits on 140 acres.

Hamlin romps in finale at Homestead-Miami