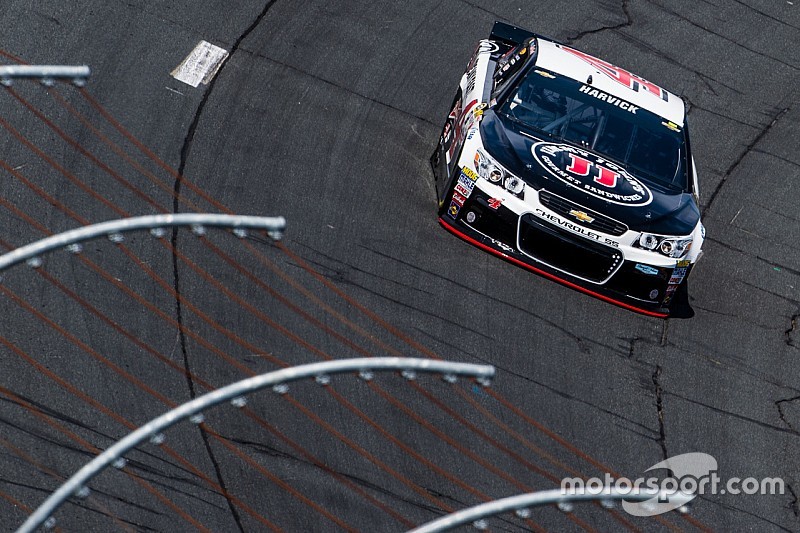 Kevin Harvick led the Saturday morning practice, but a two-car incident in the garage was the highlight of the session.

Following morning rains, NASCAR Sprint Cup teams got roughly an hour of practice Saturday morning. Kevin Harvick was fastest of all, trailed by another Hendrick-powered machine in Jimmie Johnson.

Despite his apparent speed, Harvick wasn't entirely pleased with his car and the changes made to it. Crew Chief Rodney Childers plans to try something different in final practice.

Joe Gibbs Racing made their presence known once again, slotting in third (pole-sitter Carl Edwards), fourth (Kyle Busch), and sixth (Matt Kenseth). Kurt Busch was the final driver inside the top five and along with Kyle Larson, ran the most laps at 56 total.

"A little loose off. The front is giving too much leeway to the rear tires," Busch radioed to his team.

Trouble in the garage

Ryan Newman suffered a puncture early in the session, bringing the session to a momentary halt. Jeff Gordon only completed 13 laps of practice after a bizarre incident in the garage.

Clint Bowyer was attempting to drive through the garage when Gordon backed out right in front of him. The two collided, causing minor damage on the No. 15 but rather significant repairs were needed on the right rear of the No. 24.  Bowyer angrily gestured towards the Hendrick crew member who was waving Gordon out of the his stall (Crash Video).

Dale Jr. has struggled for grip this weekend and the issues persisted into this morning session. "I feel like someone moved the track bar adjuster farther away from my thumb We're getting killed through the center of the corner. The car doesn't turn, when you get in the gas it's the worst. It just goes straight, carries the left front." He was P12.

"Connected the corner better, center and exit especially," said Martin Truex Jr., 14th. "Just lost a little bit of point right there, the last two laps, right in the center but I still felt pretty good about it. Still banging the splitter, making the front inconsistent."

Danica Patrick was back in 26th, but was positive about the improvement she felt in her car. "That was better. Especially the entry. The bumps aren't making it better on the entry to three. I can actually hold my hands in the same spot around the whole corner a lot easier. I was better off - it was definitely more comfortable to drive."

Bowyer and Gordon collide ... In the garage