Harvick snags victory from Truex in wild finish at Kansas

Kevin Harvick powered past Martin Truex Jr. with one of 267 laps remaining and held on for his fifth Monster Energy NASCAR Cup Series win of the season. 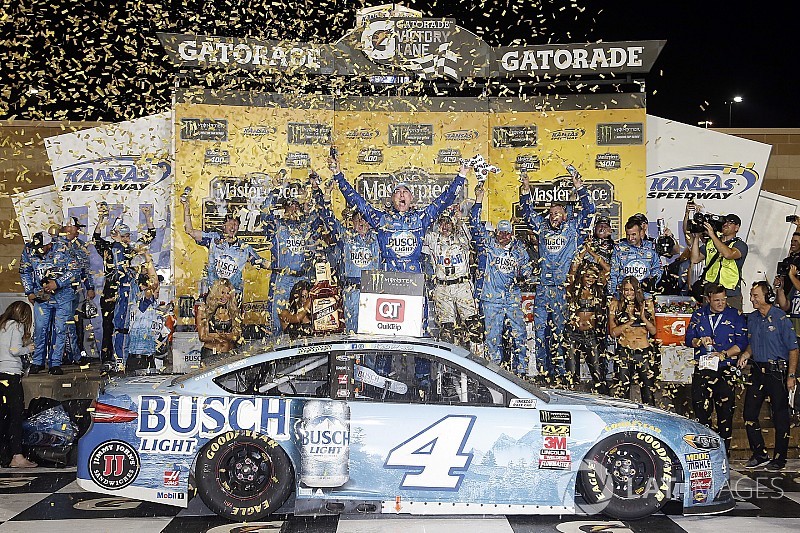 Harvick, who started on the pole, lined up sixth on a restart with nine laps remaining and quickly moved into second with seven laps left. He moved around Truex with one to go and held on for the win in Saturday night’s KC Masterpiece 400 at Kansas Speedway.

The win is Harvick’s second consecutive win and 42nd of his career.

"Man, that was a wild last few laps. I think as you look at the end of the race, I was really tight on the bottom so I just started driving it up top. I figured I'd either drive into the wall or win this race," Harvick said in Victory Lane.

"It started working and I made up a bunch of ground. I'm excited to be in Victory Lane, can't you tell? I was so pumped seeing those fans in the stands screaming and yelling. It came down to the restarts at the end.

During the break between Stages 2 and 3, Larson was the first off pit road and reclaimed the lead when the final stage went green on Lap 168. He was followed by Harvick and Ryan Blaney.

Shortly after the restart, Kyle Busch reported a vibration in his No. 18 Toyota and asked his team to let him know when he was in the fuel window.

With 80 laps remaining, Larson continued to hold a solid lead over Harvick, followed by Blaney, Logano and Kyle Busch.

Austin Dillon made a green-flag pit stops on Lap 200 but was penalized for a commitment line violation and had to make a pass-thru penalty.

With 55 laps remaining, several teams began green-flag pit stops as the fuel window opened to make it to the finish without having to stop again.

Once the stops cycled through, Larson returned to the lead with 42 to go in the race. He was followed by Blaney, Harvick, Logano and Kyle Busch.

With 31 to go, Daniel Suarez got into the wall and then made contact with Alex Bowman to bring out a caution – the first for an accident in the race.

All of the lead lap cars pit for fuel and tires, with Larson the first car off pit road and back into the lead when the race returned to green with 25 laps remaining. He was followed by Harvick and Blaney.

With 24 to go, Harvick powered past Larson back to the lead and Logano moved into second place behind him.

With 18 to go, Blaney got into the side of Larson, with Blaney hitting the wall while Larson’s left-rear tire got cut down. “What the (expletive) is he doing? He can only run me up so high,” Larson said over his team radio right after the incident.

During the pit stops, William Byron was the first off pit road, taking only two tires, but several cars remained on the track. Logano, who stayed out, inherited the lead on the restart with 15 laps to go.

Truex moved quickly into the lead on the restart.

On the next lap, a multi-car wreck erupted on the frontstretch when Byron got into Clint Bowyer in an incident that sent Byron’s No. 24 Chevrolet on top of Newman’s No. 31. Also collected were Matt Kenseth, Jamie McMurray, Ty Dillon, Ricky Stenhouse Jr. and Chris Buescher.

NASCAR immediately displayed the red flag to clear the track of debris. The race returned to yellow after a stoppage of more than 13 minutes.

On the restart with nine laps remaining, Truex led followed by Logano, Jones, Hamlin, Elliott and Harvick. Harvick had the newest tires of the group.

With seven laps remaining, Harvick moved into second behind Truex.