Harvick rallies for second at Pocono but "should have blown up" 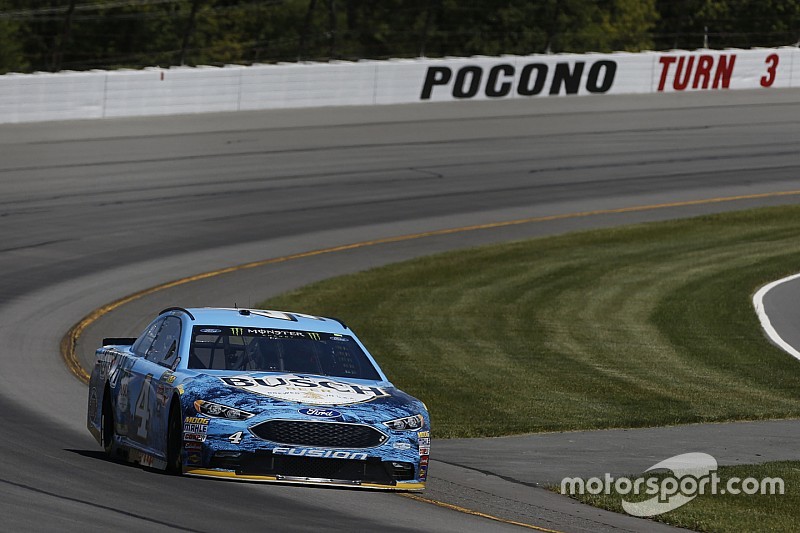 Kevin Harvick wasn’t sure he would be able to finish the race, let alone contend for the win Sunday at Pocono Raceway.

On the final lap of the second 50-lap Stage, Harvick missed a shift, accidently putting his No. 4 Stewart-Haas Racing Ford into second gear from third while racing at full speed.

Almost immediately, he realized he could have a potentially devastating engine problem on his hands. In fact, Dale Earnhardt Jr. had done something very similar earlier in the race, which caused his engine to blow and relegated him to a 38th-place finish.

But Harvick pit during the break between Stages 2 and 3 and his car appeared no worse for wear.

“I missed a shift from third-to-second and I have to thank the Roush Yates Engine shop for building a pretty sturdy engine because it should have blown up and it never blowed up,” said Harvick after rallying for a second place finish to winner Ryan Blaney.

“I had a tough time driving in the corner all day. We never could stop like we needed to all weekend, so you just had to be really careful with the brakes. If I'd over-drive it for a lap or two, the pedal would start going down, and then I was really at a deficit.

“So, I had to be very aware of where I let off every lap.”

With 10 of 160 laps remaining in the Monster Energy NASCAR Cup race, Blaney moved to the inside of Kyle Busch for the lead and shortly thereafter, Harvick passed Erik Jones for third. Harvick moved into second on the next lap

Harvick closed to rear bumper of Blaney’s No. 21 Ford on the final laps but could not complete a pass for the lead before the checkered flag.

“My best bet, the way I passed people all day, was waiting for him to slip up off the bottom, and he never slipped up off the bottom,” Harvick said of attempting to run down Blaney. “I just didn't have enough laps to finish that last pass off.

“We had the car where we needed it pretty much in every corner, just couldn't charge any of the corners like I needed to. Everywhere else, the car handled flawlessly all day and we didn't really make any adjustments on it other than a little bit of air (pressure) here and there.”

While disappointed in not securing his own first victory of the season, Harvick called Blaney’s win “good for the whole sport.”

“These young guys winning is important for our sport. Obviously as our team, we want to win, but these young guys have to get into Victory Lane to get these fans that don't like me and Kyle (Busch) and the rest of the guys,” said Harvick who remains third in the series standings.

“That fan base that’s available and new, the younger crowd has to win, and today Ryan was able to do that, so not only is it good for him, but it's good for the whole sport.”