Harvick on need to approach NASCAR return with "open mind" 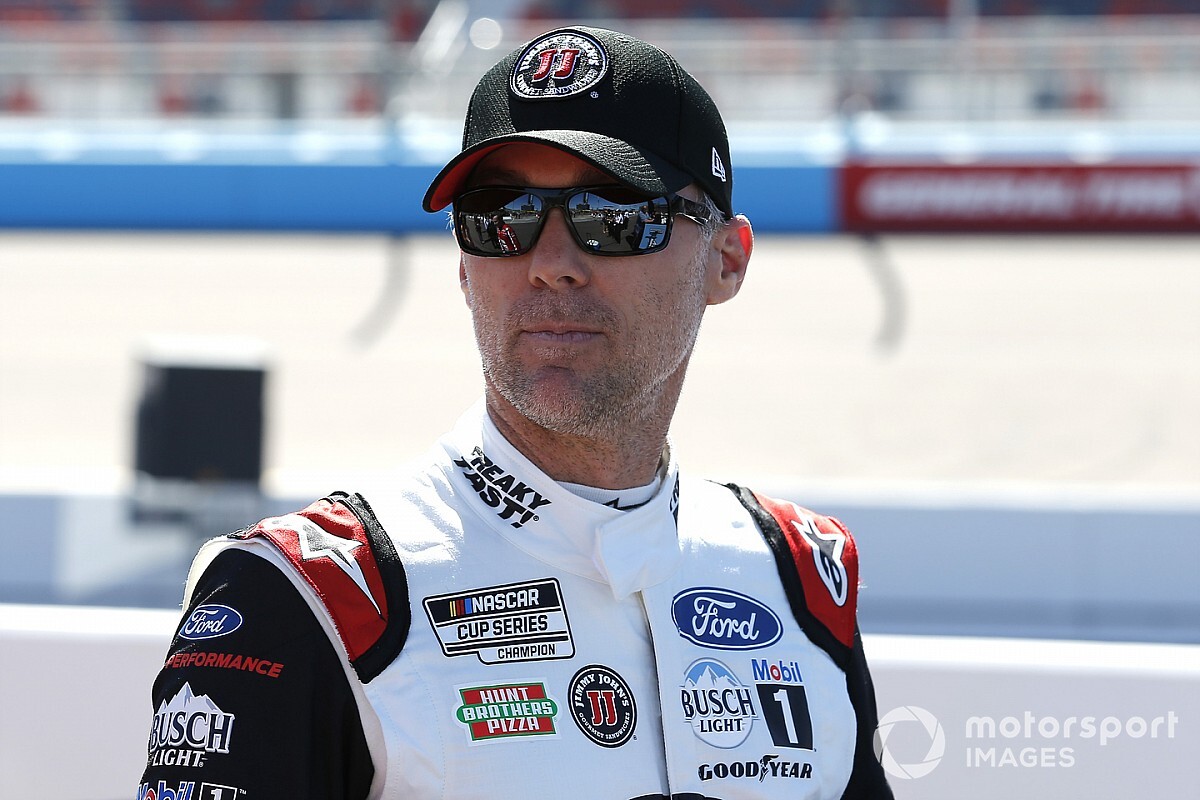 Kevin Harvick talked NASCAR's return Thursday and how the drivers and teams must adjust to this new norm amid the COVID-19 pandemic.

NASCAR will go back racing Sunday, May 17 at Darlington Raceway with several restrictions and safeguards in place in order to limit person-to-person interactions and ensure the safety of all involved.

Not only will the at-track atmosphere be different, but there are plenty of unknowns heading into the race itself. There will be no practice, no qualifying at a track known as 'too tough to tame. Darlington's Labor Day Weekend event runs into the night, while this race will be run the heat of the day.

Kevin Harvick hit on that very thing in a teleconference this morning, saying: “You obviously don’t know what condition you’re really kind of facing just because of the fact that Darlington last year went into the night. This time it will be a relatively warm day in the sun most of the day, so Darlington is a very sensitive temperature track, so I think you kind of have to evolve as the race evolves.

"You look at last year’s stuff, you look at the evolution of the cars as we’ve gone through the off-season and the first part of the season knowing that you at least get to race on the same tire that you had last year, so you take those common trends, you take the things that we needed to do differently from the last race and try to blend all those things together, and then just know that most likely you’re not going to hit that target of making the car drive perfectly and being able to have adjustments in either direction."

Goodyear is bringing the same tire combination meant for Homestead's spring race, which has been postponed. NASCAR will also have a competition caution in the early running.

"I think the biggest goal in this instance is to just not be in right field, try to get yourself in the ballpark and be able to adjust on it so you don’t have to have a rebuild and a reboot," he continued. "A few days later you can do that, but you can’t do that during the race, so we’re trying to be solid through these first several races so you don’t shoot yourself in the foot and have to try to reboot in the middle of a race because that will be tough, but you’re definitely gonna have to make changes and evolve with the race track as it changes."

From the routine standpoint, Harvick said the the lack of interaction and the physical difference will be the most difficult aspect to adjust to on race day.

“For me it’s just gonna purely be the interaction with not being able to have the interaction with the people, and communication will just be drastically different," he explained. "How much you’re around people, how close you are to people and things of that nature.  I’ve started races with no practice.

"The routine is different. It’s not as different as Darlington as it’s going to be when we actually do start traveling further than somewhere we can drive because it is a race that we drove to, for the most part, back and forth each day and it is a race that is typically hot, it’s a unique race track, so there are a lot of things that aren’t completely outside of the box, but the people and your interaction with people is just a lot different, has been a lot different – not being able to go to the shop, not being able to have meetings face-to-face is just not normal, and part of the thing that I think we’ve all learned through all this is just your interaction with people is something that you just kind of took for granted and I think as you look at in now that’s the part that you’re missing the most. So there’s a number of things that are different, but that’s the part that is different for me because we talk through so many things so well as a group, and you won’t have that.”

Harvick believes this pandemic will even change the way teams and the sport operates moving forward permanently, similar to how the 2008 financial crisis changed the landscape of NASCR.

"A lot of things changed when we came out of (the financial crisis) and a lot of the things, a lot of the teams, a lot of things in the sport – businesses – everybody operated a lot differently for the most part as we came out of that.  To me, the same thing is going to happen here. You’re going to operate differently. I think, obviously, as we go through the screening getting into the race track, the screening during the week, all those things I think everybody expects right now because you’re seeing different businesses go back to work and the screenings that they’re doing that are required are just – that’s the way it is right now – but I think with all the meetings that I’ve been a part of at home and iRacing and the way that the teams are functioning there’s going to be some things that come out of this situation that are permanent and what those things are will start this weekend.

"I don’t really know what it is or what they will be, but I think this weekend will be the start of a process that you kind of have to look around and say, ‘You know what, that wasn’t a bad idea. We did it out of necessity to go in this race track and race and put on a show, but is that something we can carry forward?’  And I think that question is going to be asked a lot as we do things going forward.”

NASCAR will be one of the first sport's back following the virus outbreak. Harvick noted the unique nature of the racing that separates it from other sports, where physical contact between participants isn't necessary to compete. Harvick even quipped that unlike the UFC, "I’m not gonna get punched in the face by anybody else or be put in a head lock or be directly in contact with any of my other competitors."

Also unlike the UFC, NASCAR will not be testing its participants for the virus, tests that "remain in short supply" per vice president of racing operations John Bobo.

Despite all the measures taken by NASCAR, even going as far as assessing fines to those who do not follow guidelines, it's unlikely that they will get it all right.

"So it’s obviously not a normal situation, but I think our sport is much different than other sports as far as the interaction between the competitors and the way that things function, so with every driver and every person in that garage being treated like they have the virus and being compartmentalized and doing the things that it takes to keep our sport safe. It’s not a locker room full of guys that are getting ready to go throw a ball around or have to have that interaction with each other on a weekly basis, so it’s a little bit different, but from our side of it we’ve already seen it work and I think our sport has done a good job to prepare us for this.

"We’ve got 40 guys that need to make sure that they take it seriously from a driver’s side and a whole garage that will do the same. I think we’ll do that.”