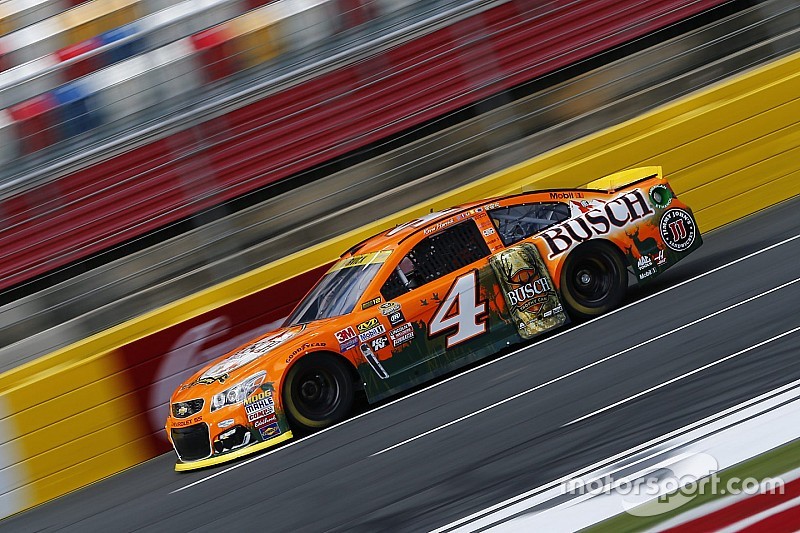 Both Joey Logano and Kevin Harvick suffered what could be serious setbacks to their respective championship hopes in Sunday’s rain-delayed Bank of America 500 at Charlotte Motor Speedway.

Harvick was running in the top five when he suddenly fell off the pace on Lap 156 of 334 and dropped down onto pit road the following lap.

His No. 4 Chevrolet appeared to have an issue with its engine control unit (ECU). Harvick’s Stewart-Haas Racing team tried to diagnose the problem on pit road, but eventually they were forced to take the car to the garage. The bearing in oil pump came apart and sheared the teeth off the oil pump gears.

“It seems like it has something to do with oil pressure. That’s just a guess,” Harvick said in the garage while his team was continuing to work on the car. “We’ve narrowed it down to a few things and that’s one they are talking about.”

Harvick can't return to the race and will finish 38th. This will be the second consecutive race he’s finished 37th or worse.

Logano in the wall

Just as Harvick was experiencing his problem on the track, Logano slammed the wall for the second time in the race due to a cut tire. This incident required Logano to take his No. 22 Ford to the garage for repairs as well.

“I felt really good about what we had, it’s just part of racing,” Logano said in the garage. “We’re not down, we’re not out – we’re too resilient. We’ll just have to get it fixed and go back out there again.

“You can see these guys behind me. They are working their tails off trying to get this thing back out there and gain one or two points toward this championship.”

Logano said his two tire issues were different – one involved a left-front tire while the other involved the right-front.

“I don’t know, once you hit the wall once, it hits all the front-end geometry out of line,” he said. “That’s probably what screwed up the second one for all I know.

“We’re fine. We have a really good race team that can go to Kansas and win. These two race tracks, Charlotte and Kansas, are our best tracks. We proved last year we could do it, we just have to do it again.”

Sunday’s race is the first of the Chase’s second round. The four Chase drivers (of the remaining 12) lowest in points without a win after the Oct. 23 race at Talladega, Ala., are eliminated from further title contention.

A win in any of the three races automatically advances a driver to the next round regardless of their performance in the other two races.

Last year, Logano won all three races in the second round of the Chase.

Heading into next weekend's race at Kansas Speedway, the four Chase drivers lowest in points without a win are Austin Dillon, Chase Elliott, Logano and Harvick.