“It was a struggle all weekend with our Furniture Row/Denver Mattress Chevrolet.” 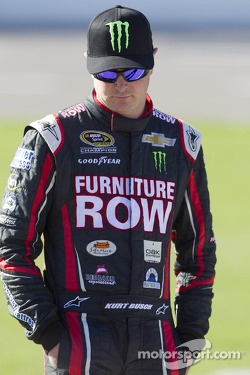 “That’s all we had – it was a non-eventful race from our standpoint,” said Busch. “It was a struggle all weekend with our Furniture Row/Denver Mattress Chevrolet.”

The only positive that came out of the race for Busch, who dropped from ninth to 10th in the Chase point standings, is that he finished quite a few positions better than his 31st-place qualifying effort.

“It wasn’t a good day, or for that matter, a good weekend,” noted Busch. “We were off since we unloaded on Friday and never found the right balance for this track. We gave it everything we had, but yet it was disappointing because these mile-and-a-half tracks should be good for us.”

Busch was indeed correct about the team's success at the 1.5-mile ovals. In first two mile-and-a-half races in the Chase, he posted a fourth at Chicagoland Speedway and a second at Kansas Speedway.

But at Texas' 1.5-mile oval, it was a different story for Busch and the single-car Furniture Row Racing team. After a fairly quick climb from his starting position (31st) to the low 20s, Busch could never put together a strong green-flag run due to handling issues with his Furniture Row Chevrolet. His highest position in the 334-lap, 500-mile race was 16th.

“Nothing good to say about this race,” stated Busch. “We definitely need a turnaround in the final two races because it has been too good of a year to end on a struggling note."

The race had 28 lead changes among 10 drivers and there were five cautions for 26 laps.

The next Sprint Cup Series event – NASCAR’s white-flag race – is next Sunday (Nov. 10) at Phoenix International Raceway. The season finale is the following week at Homestead-Miami Speedway.