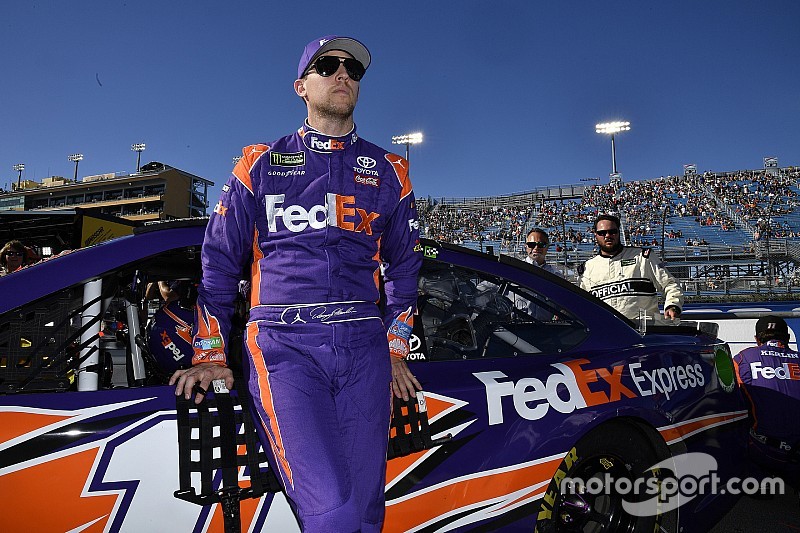 Denny Hamlin has opted to forfeit the coveted No. 1 pit stall after winning pole position for the NASCAR Cup Series finale at Homestead-Miami Speedway, handing it to his Joe Gibbs Racing teammate Kyle Busch.

Hamlin played spoiler in the final round of qualifying, jumping the title contenders and taking pole for the third time in the last four seasons.

But after winning the pole with teammate and Championship 4 driver Kyle Busch alongside, there were immediate discussions regarding the possibility he would give up the No. 1 pit stall.

"That's probably too far, but it would sure be nice," said Busch of such a possibility.

"I agree it's way too far," chimed in Martin Truex Jr., who found himself in a similar position as Busch in 2017. In fact, the reigning series champions asked Hamlin if he would give them the No. 1 stall last year, which they declined to do.

He later added, "I think if you get the pole, yes, the first pit box. I think that's what we were all shooting for tonight. Anywhere else in the top 10 or 12, it's a long race; a lot happens here. Long runs come into play, and if you're good, you can drive pretty much from anywhere in the field."

Exemplifying the importance of that first pit stall, Busch said, "I think that if you're not in the No. 1 pit box, then 2 through 40 are the same."

For the good of the team

When Hamlin entered the Media Center, he was asked that very same question. Would he give it up for the sake of JGR's title hopes?

"I mean, there's thoughts. The 78 was in the same position last year, asked us -- we declined. I mean, to be honest with you, my pit crew is a second slower than Kyle's. I think everything is earned. Nothing is given," said Hamlin.

"With us having the No. 1 pit stall, nobody else -- none of the other competitors will have it. I don't know. It's a discussion.  I mean, certainly I would think that Wheels, with the pressure always to win, you've got to do everything you can to win. We'll have that discussion."

Well, the discussion was had and a decision was made. Saturday morning, the No. 11 team opted to take the No. 4 pit stall, which has an opening ahead and Team Penske's Ryan Blaney behind. It's also worth noting that Truex won the 2017 championship from that very same pit box.

But Hamlin's choosing the fourth stall allowed Busch to claim the No. 1 stall and gain an advantage over the other three title contenders. Should there be a late-race pit stop, that stall could prove to be pivotal in who takes the 2018 championship.

Team owner Joe Gibbs offered an explanation to NBCSN, saying "We all kind of got together as a team and so, what came out of those meetings was this -- what we want for Denny is to win this race. That's important for him and that's a big deal for us and our sponsor. And then of course the other side of that for our team, we want to win a championship. And so we all kind of meet, we talk all that over, and it's everybody making a team decision and we felt the best thing for us was we want Denny focused on winning this race. He thinks he can do it, and we think he can do it from that pit box. And at the same team, we want to make a team decision. We'd like to win a championship for Joe Gibbs Racing. That's part of the complication, the intriguing part of this, but it's part of the sport."

In it to win it

But despite the controversial decision, Hamlin's desire to win Sunday's race can't be questioned.

"Once we got knocked out of the playoffs, it was obviously the No. 1 priority within our race team is to try to get a win," he said. "We've had a few shots here lately, between Martinsville and a couple others. I sat behind Kyle for way too long at Martinsville, or else I would have won that race, and so you second-guess yourself, and you think that -- being a good teammate -- you've got to be a good teammate, no doubt about it, but you also -- we have a big sponsor on this car. We have a lot of people that work really hard on this car to not give 100 percent, and that's something that we have to do."

The champion has won the race at Homestead every year of the elimination era, dating back to 2014. That's something Hamlin wants to change Sunday night as he faces the longest winless streak of his career.

"The champion has won this race every time? Yeah, every time. So sure, we want to break that streak and hope Kyle finishes second."