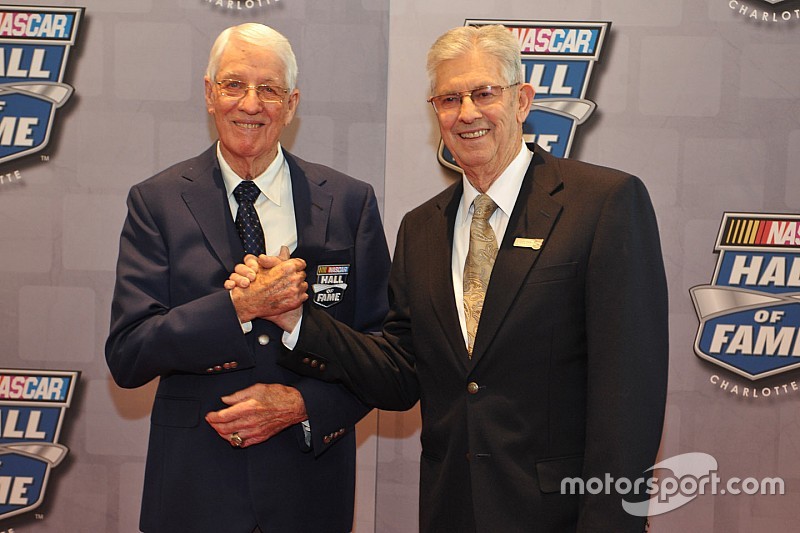 Glen Wood, the patriarch of one of NASCAR’s most famous families and co-founder of the sport’s longest-running team, died Friday.

Wood, 93, who had been in declining health, was the oldest living member of the NASCAR Hall of Fame until his death. He and his brother, Leonard, were inducted into the Hall’s third class in 2012.

The team said funeral arrangements were incomplete but it would be a private family service.

Wood laid the foundation for the famed Wood Brothers Racing team as a driver in NASCAR’s premier Cup series. Competing on a semi-regular basis, he won four times but he is best known for his collaboration with brothers Leonard and Delano in Wood Brothers Racing.

The team, which was based in Stuart, Va., dates to 1950 and still remains active, has amassed 99 victories in more than 1,500 starts. The team’s most recent victory came with driver Ryan Blaney in 2017 at Pocono Raceway.

“This is a difficult day for all of us at Ford Motor Company. Glen Wood was the founding patriarch of the oldest continuously operating NASCAR Cup Series team and we consider Wood Brothers Racing a part of our family, the Ford Family,” said Edsel B. Ford II, member of the Ford Motor Co. board of directors.

“The Wood Brothers race team, by any measure, has been one of the most successful racing operations in the history of NASCAR. Most importantly for our company, Glen and his family have remained loyal to Ford throughout their 69-year history.

"Glen was an innovator who, along with his family, changed the sport itself. But, more importantly, he was a true Southern gentleman who was quick with a smile and a handshake and he was a man of his word. I will cherish the memories of our chats in the NASCAR garage, at their race shop in Mooresville or the racing museum in Stuart.”

NASCAR Chairman and CEO Jim France said of his passing, “In every way, Glen Wood was an original. In building the famed Wood Brothers Racing at the very beginnings of our sport, Glen laid a foundation for NASCAR excellence that remains to this day. As both a driver and a team owner, he was, and always will be, the gold standard. But personally, even more significant than his exemplary on-track record, he was a true gentleman and a close confidant to my father, mother and brother. On behalf of the France family and all of NASCAR, I send my condolences to the entire Wood family for the loss of a NASCAR giant.”

Many of NASCAR’S most successful drivers raced for the team, including several, like Glen, that have been inducted in the Hall of Fame. Among them are David Pearson, Curtis Turner, Junior Johnson, Joe Weatherly, Fred Lorenzen, Cale Yarborough, Dale Jarrett and Bill Elliott.

“This is not just about me being inducted in the Hall of Fame. It’s also about the Wood Brothers. And it’s about NASCAR,” Wood said at the time. “And I’m proud to have been a NASCAR driver and car owner for the past 60 years, and I’m proud of this great honor.

“This is about two families: the Wood family and the Ford family working together, which has resulted in me being here tonight.”

A gentleman above all else

In a statement, NASCAR Hall of Fame Executive Director Winston Kelley said despite all the success, Wood was remembered for his grace, humility and character.

“The word that best describes Glen to me is ‘gentleman.’ I’ve often said if you looked up the term ‘Southern Gentleman’ in the dictionary, you would see a picture of Glen Wood and likely all of the Wood Brothers,” he said.

“While we have lost one of NASCAR’s true pioneers, icons and legends, Glen’s legacy and memory will continue through Wood Brothers Racing and will be forever remembered, preserved, celebrated and cherished here at the NASCAR Hall of Fame, at the Wood Brothers Museum in Stuart, Virginia, and in our hearts and minds."

Martinsville Speedway president Clay Campbell said of his passing: “With the passing of Glen Wood, we have truly lost one of the most iconic figures in NASCAR. What he and his family have done in this sport, and the impact he personally leaves, is remarkable and cannot be understated. With Mr. Wood living in Stuart, so close to Martinsville Speedway, my memories of him go back to my childhood. Glen would often call up my grandfather H. Clay Earles and ask if they could come down and run a few laps. My grandfather would tell them ‘yeah, just close the gate and lock it up when you’re done.’ Seeing his cars in my youth is the reason that candy apple red became my favorite color and I’ll never forget his number 21 modified. More recently, it was always a pleasure to see and talk with Glen at the track. We spoke often not just at Martinsville, but at other tracks on the circuit, even into his 90’s. Glen was truly a legend and someone the Martinsville Speedway family will never forget. My thoughts are with Leonard, Eddie, Len, Kim and the entire Wood family, particularly Mrs. Wood. Glen will be missed, but his legacy in NASCAR and in our community will live on forever.”

And said A.J. Foyt: “Glen Wood was a good friend and one of my favorite people in NASCAR along with his brother Leonard. I never had as much fun down there as I did driving for the Wood Brothers. Their cars were unbelievable to drive. They pioneered the quick pit stops and were part of the reason Jimmy Clark won the Indianapolis 500 because they pitted him. Their team was the kingpin of stock car racing and I felt honored to be driving for them. My thoughts are with Leonard, Eddie and Len and the entire Wood family.”