Jeff Gordon has won his way into the Championship 4 at Homestead-Miami Speedway in his final year before hanging up the helmet. 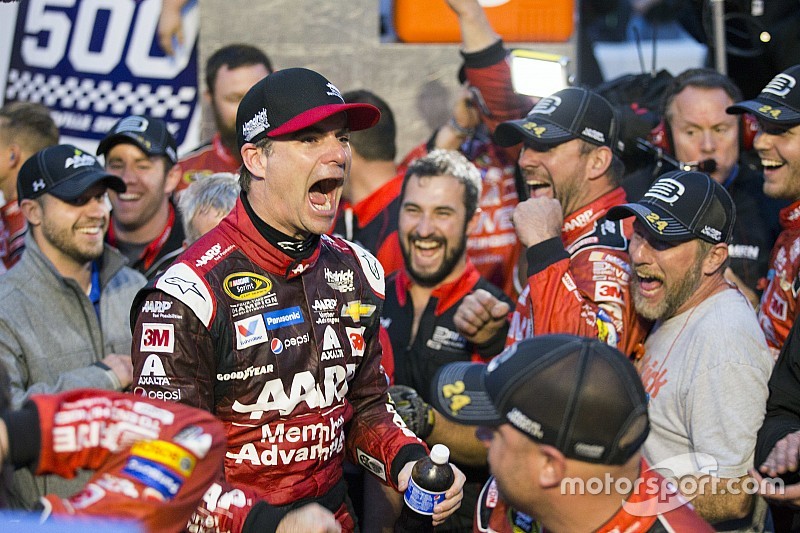 Yes, the drought has ended for Jeff Gordon.

After running 39 races without a win, Gordon was victorious in his final running of the Goody’s 500 at Martinsville Speedway on Sunday.

It was all a joke, I’m coming back next year. No way, man. This is the sweetest most amazing feeling. I’m trying to hold back my emotions. We’re going to Homestead!

It was the 93rd win for the No. 24 Hendrick Motorsports team — and Gordon’s ninth career victory on the half-mile track.

Logano had led 207 circuits prior to the wreck. NASCAR red-flagged the race for 12 minutes and 46 seconds. Gordon pitted prior to the restart and lined up behind Denny Hamlin and AJ Allmendinger — both who stayed out on the race track.

Sprint to the finish

As nightfall set on the track, Gordon passed Allmendinger for the lead on Lap 478. He remained at the point when Sam Hornish Jr. triggered the 18th and final caution on Lap 493.

With three laps remaining, Gordon lined up alongside Jamie McMurray. He was able to hold off McMurray and extended the lead over the No. 1 Ganassi Racing Chevy by 0.336-seconds at the finish-line for the win.

When Gordon was asked if this was the best race of his career, the four-time Cup champion replied, “It was all a joke, I’m coming back next year. No way, man. This is the sweetest thing…I’m trying to hold back my emotions. We’re going to Homestead!

“What an incredible battle that was. We just stuck with it all day long. People don’t give this team enough credit and we just seized an opportunity right there. I don’t think this opportunity would present itself the next couple of weeks. We’re going to take advantage of this one and I don’t have to worry about that.”

There were nine leader on Sunday, with Gordon holding the point for 35 circuits. McMurray, who finished second, tied his best finish of the season set at Phoenix in March.

“Great battle with Jeff," McMurray said. "I have looked up to Jeff Gordon since I was a little kid. What a fun way on his last year to get to battle him like that. I wish we could have won, I had a great car. The inside line was just the preferred line on the restarts.”

“The last 100 laps were good, the car was fast, it was hard to pass,” Earnhardt said. “The cars were just kind of equal. I love Martinsville, but if we’re going to run at night, they need to put some damn lights up here.”

The race started under yellow for the first seven laps as NASCAR safety crews worked to dry pit road. On Lap 436, Kurt Busch triggered a wreck entering Turn 1 after tagging the rear of Brad Keselowski’s car. Not only did Busch damage his own car, he took Keselowski and Kenseth out of contention as well.

However, Kenseth returned to the track on Lap 447 and exacted his revenge on race leader Joey Logano after multiple run-ins with the No. 22 Team Penske driver over the past two weeks.

Logano had led 207 laps prior to the altercation in Turn 1 that left the crippled No. 22 Ford on the inside wall in Turn 2. He finished 37th, the lowest finishing candidate in the Chase.
While Gordon was in the hunt throughout the race, Logano’s absence open the door for the No. 24 Chevy. Martin Truex Jr., whose 27 laps led were more than in his previous 19 starts combined, finished sixth, followed by Ryan Newman, Kevin Harvick, Kasey Kahne and Tony Stewart.
For Stewart, it was his first top-10 finish since August and just his third of the year.
As Gordon enjoyed his victory celebration on the fronstretch with his team and the fans, he expressed his gratitude to win the first race of the Eliminator Round — and have the opportunity to now concentrate on the season finale at Homestead-Miami Speedway.

“We’ll grind it out,” Gordon said. “We’re going to give it something to think about. First, we’re going to improve our race car a little bit for Homestead. Don’t count us out.

“We’ve proved that during this entire Chase and we certainly proved that today. This team is fired up; we’ve got some momentum now.”

Kenseth parked after wrecking Logano out of the race lead - video