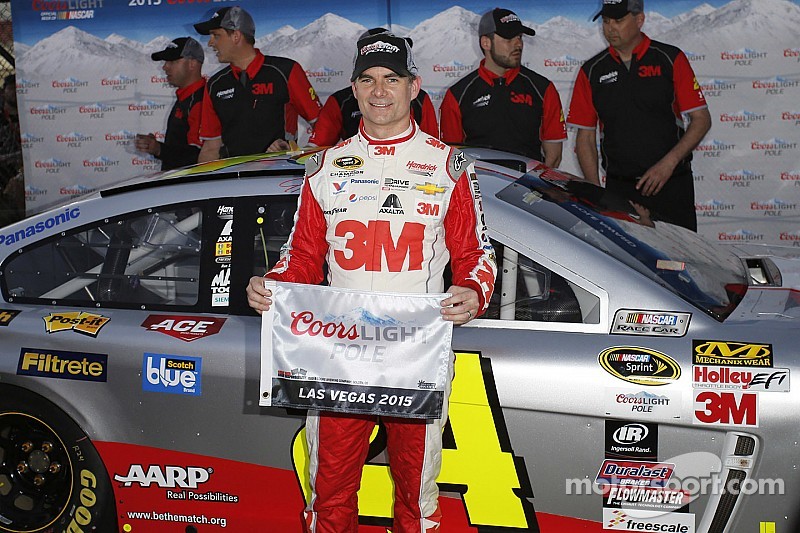 The outgoing Jeff Gordon has done a lot in his career, but he's never won a pole at Las Vegas Motor Speedway ... Until now. The driver of the No. 24 earned his second pole in three races and the 79th of his career Friday, edging out Joey Logano by just half a tenth with a lap of 194.679mph (27.238 seconds) ... A new track record for LVMS.

"Oh boys, this is good," said Gordon after the conclusion of the session. "That was a damn good lap."

With 48 cars attempting to qualify, five were sent home. They were as follows ... Reed Sorenson (#29), Mike Bliss (#32), Travis Kvapil (#44), Mike Wallace (#66), and Matt DiBenedetto (#83), who was attempting to make his first ever Sprint Cup start for the second consecutive week.

Issues with the No. 2

We did not have the massive qualifying woes we saw at Atlanta with 13 cars never even getting a chance to go out on track, but there was still some drama. After an official spotting the Team Penske crew attempting to manipulate the side skirt of the race car, the No. 2 was pulled back into tech. Defending race-winner Brad Keselowski would eventually qualify and will line up 11th.

Two of Gordon's Hendrick teammates will take the green flag from the second row, being Kasey Kahne and Dale Earnhardt Jr., who thought the No. 88 would have sat on pole had he been able to run it wide open. Kyle Larson, with Hendrick power under the hood, timed in 5th.

Matt Kenseth, Ryan Newman, Martin Truex Jr., Jimmie Johnson, and Jamie McMurray rounded out the top ten. Driving the No. 18 in pace of an injured Kyle Busch, David Ragan just missed the final round and will start 13th.

Did you get the memo? NASCAR changes qualifying day schedules