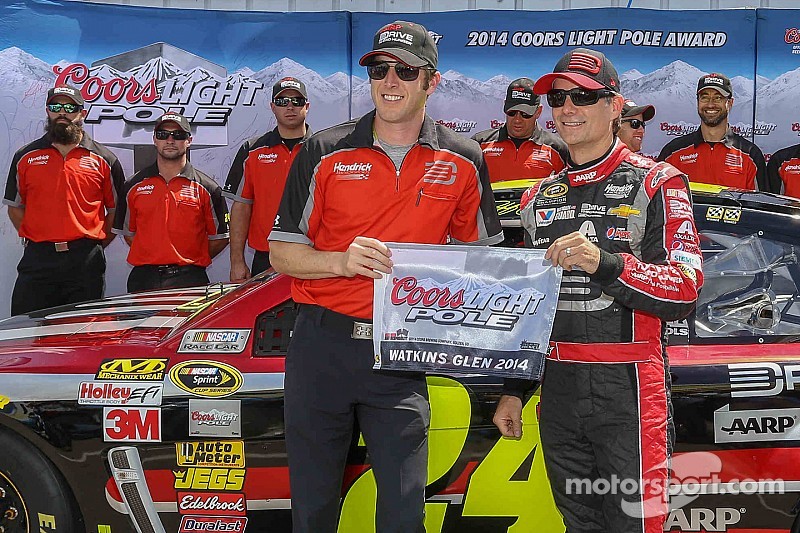 Jeff Gordon has claimed pole position for the first time this year.

He will lead the field to the green flag at Watkins Glen for the third time in his legendary Sprint Cup career. He also won pole here in 2003 and 2007 (based on owner's points). This extends his record-breaking streak of poles to 22 consecutive years.

Qualifying records have been broken 16 times during the 2014 season. Gordon’s accomplishment was made surprising after he placed seventh and 16th fastest speeds in two rounds of practice. Race favorite Marcos Amborse will share the front row with Gordon, coming a tenth and a half short of pole position.

“I am super excited about our performance in 2014, and we have had the Glen on our radar because we have run so poorly in recent times,” Gordon said.  “We were fast in practice yesterday, but in qualifying trim, it didn’t go well and we were concerned.  We made a few changes over night and didn’t know what to expect.  On my first lap, I got blocked by another car, so we went back out and put a really good lap together.  Once I ran that lap, it brought out confidence back, and I was able to attack the track.

“I don’t know where that last lap came from.  I knew it was a good lap, but I didn’t think it was that good.  I was surprised with the lap laid by Marcos Ambrose in the first session, so you can only imagine how surprised I was with my lap time.  Our main goal for the weekend was to try and qualify in the top 10 or 12.  To be on the pole, it is a good starting position with a good pit stall.  There are some very aggressive drivers up there with us, and I will be aggressive here tomorrow.  We are here to win.”

Ambrose, the pole favorite, hit 129.138 mph and expressed disappointment with missing the pole but was also pleased to qualify on the front row.

“Today, we qualified fourth (Nationwide Series) and second, which is a good start to the weekend,” he said.  “I just wish Jeff (Gordon) would have been a bit kinder to me and let me have the pole.   I thought we had it at the end, but that was not enough.  It was a good lap, and we will take it.”

Noted Johnson, “We unloaded strong and found something good in race trim, but didn’t work so well in qualifying trim.”  He said his team borrowed a set-up from Dale Earnhardt Jr.’s team, which worked to his advantage.  “That set-up got us into the top-five (in round one), and I tried to mimic the lines of Dale Jr.’s, but I made a mistake in turn six.  I regret that a little bit.”

Casey Mears led the charge off pit road and every driver was very careful to respect the blend-line rule that NASCAR has been strictly enforcing this weekend. A.J. Allmendinger topped the charts early, but Ambrose quickly threw down a blistering lap of 129.491mph; a new track record.

Joey Logano was forced to sit out a good part of the session due to the splitter becoming partially disconnected. After the crew made repairs, he was able to fight his into the top twelve. Kevin Harvick was not happy with Kyle Busch, who impeded his lap as Harvick went through the fifth corner. He then slowed and shadowed the No. 18 for the rest of the lap, later coming over the radio frustrated with himself and Busch's team. He, like Logano, would rebound however and make a final charge into the top twelve.

Underdog Justin Allgaier held on to the bubble with just 60 seconds remaining when road course ace Jeff Gordon knocked him out. Tony Stewart was then pushed onto the bubble spot and could only look on as Joey Logano aimed to push him out. Despite running wide in the final corner, Logano succeeded and Stewart missed out on advancement by just .004 thousandths. Brian Vickers was the final driver to move on.

Marcos Ambrose unsurprisingly rocketed to the top of the charts early in the final round, but he would not stay there. With just three minutes remaining, Jeff Gordon rocketed past the No. 9 machine on the time sheets, a full tenth and half ahead. An estatic Gordon came over the radio yelling, "hell yeah boys!"

Marcos Ambrose roared out of the pits with 60 seconds remaining, desperately trying to reclaim pole. He would never get the chance however. Time expired as Ambrose came within a couple seconds of the line, and he was forced to settle for second.