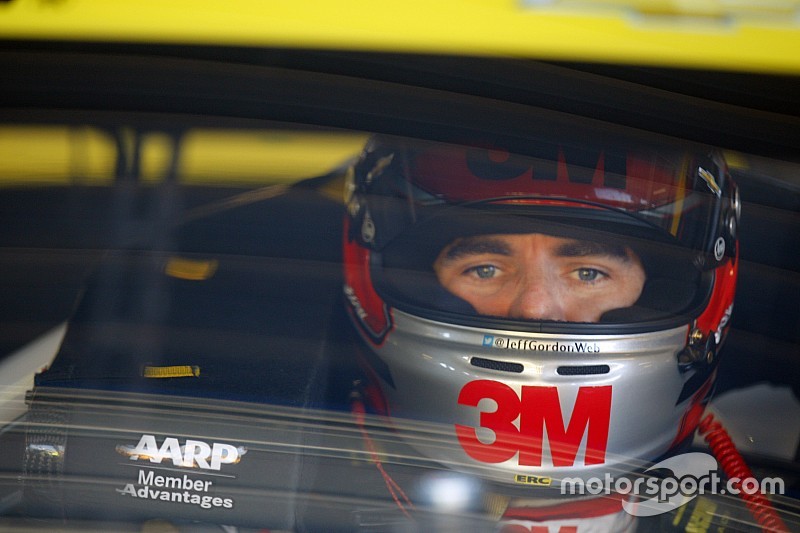 But after 196 laps both Chevy drivers transferred to the Eliminator Round of the Chase for the Sprint Cup.

Gordon started from the pole and led twice for a total of eight laps. Secondary to moving on in the Chase, Gordon’s mission was to help his Hendrick Motorsports teammate Dale Earnhardt Jr., advance to the third round.

Despite pushing Earnhardt to the lead on multiple occasions throughout the race, the Team Penske duo of Joey Logano and Brad Keselowski split up for the final restart forcing Gordon to line up behind the No. 22 Ford and the No. 88 Chevy to rely on the No. 2 Ford for a push on the restart.

I am so proud of this race team. They never quit, they never give up and I can't believe we are going to round three. I said all along that if we got to round three, we have an excellent shot to get to Homestead.

The race barely got up to speed before Kevin Harvick triggered a multi-car wreck midway through the pack. When NASCAR called the third and final caution on Lap 196, Gordon’s effort was for naught. Logano won. Earnhardt and Gordon finished second and third, respectively.

"Oh my gosh, that was intense,” Gordon said. “That was wild. That was crazy. I hate it that I didn't have Dale Jr in front of me on that last restart. I got kind of excited about pushing him there at the end and get both him and me in the next round.

“That was pretty smart of the Penske guys to split themselves up. It is unfortunate that we had those two wrecks on those restarts. The restarts are so crucial. Everybody is trying to get all that they can and banging one another. I loved my race car today. My 3M Chevrolet was awesome. I would have loved to have a shot at them there and finish this thing out.”

Hendrick's final bullet in the gun

For the second season under NASCAR’s new Chase format, Gordon was the only Hendrick car to advanced to the third round. However, with this season being last opportunity to win the title, the four-time champion focussed on his own self-interest.

“I had too much on the line, so all I could do was get a good restart and not lose spots,” said Gordon, who is currently third in the standings and had just an 18-point cushion over ninth-place Ryan Newman. “We were still in jeopardy too. I thought maybe we could push Joey a little bit and then go to the middle and go three wide and try to find a way to help Junior. But we just could never got a chance to see it unfortunately.

“I had a lot of fun out there. It is fun having a race car that strong.  I am so proud of this race team. They never quit, they never give up and I can't believe we are going to round three. I said all along that if we got to round three, we have an excellent shot to get to Homestead.”

Barring something catastrophic, Martin Truex Jr. will enjoy a career-best finish in the Sprint Cup point standings this season.

But moving on to the Eliminator Round was far from easy for the driver of the No. 78 Furniture Row Chevy.

Truex’s weekend at Talladega Superspeedway soured quickly after he was disqualified for dipping below the double-yellow line during time trials on Saturday.

It was still nerve-wracking down to the end

Truex was forced to start 43rd on Sunday. He lost the draft early in the CampingWorld.com 500 and fell of the lead lap after 68 circuits. But Truex remained patient.

“I felt like I was on the seesaw today,” Truex said. “My head was under the back of it. It’s crazy how fast things can change and how much is out of your control. We were sitting out there riding a lap down for about 100 laps thinking that we were going to need an act of God to get back on the lead lap and have a fighting chance.”

Fighting back from a lap down

On Lap 139, he received the lucky dog and restarted 20th, then worked his way through traffic over the final 56 circuits to finish seventh — his 20th top-10 finish, a career-best for the driver.

“We kept fighting and fighting, and had a good sequence of green-flag stops to establish ourselves in that front single-file line ahead of the guys we were racing,” Truex said. “Then we got lucky and got a caution. Once we were back in the game, we felt good about it.”

Truex’s finish was not without incident. He plowed into the back of Kevin Harvick, when the No. 4 Chevy was slow to get up to speed at NASCAR first attempt to restart the race on Lap 190.

“It was still nerve-wracking down to the end,” Truex said. “The first one, I spun the 48 slap out in front of me, and I was never on the gas pedal. I was on the brake as hard as I could without locking up the front tires. I was getting hit over and over. The 48 got spun and luckily we didn’t get spun out or our day would have been over.”

Truex enters Round 3 sixth in the Sprint Cup point standings.