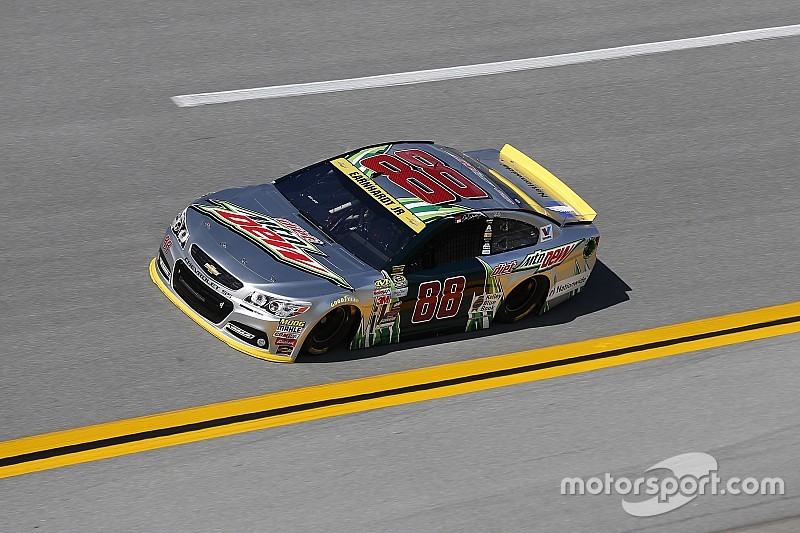 On Sunday at Talladega Superspeedway, there will be a unified Team Hendrick.

Yes, Jeff Gordon will lead the field to the green for the CampingWorld.com 500. Alongside the No. 24 Chevrolet— on Gordon’s last trip around the 2.66-mile speedway — will be his teammate, Kasey Kahne.

Behind him Jimmie Johnson in the No. 48 Chevy, a car Gordon owns in partnership with Rick Hendrick.

When you feel like you have a dominant car like we’ve had over the last several years, you definitely make some moves with confidence and you come into the race with confidence. Until we see anything different, we’ll be confident.

All three drivers will be in a position to win on Sunday. But when push comes to shove — and it will — the ultimate goal for the Hendrick drivers will be to ensure Dale Earnhardt Jr. ends up in Victory Lane and advances to the Eliminator Round of the Chase for the Sprint Cup.

“I think we all understand what’s at stake and what our goal and our mission is and how we can work together to better our chances,” Gordon said during his post-qualifying interview. “We know what Junior has to do. We know what we have to do. And we’ve got four excellent race cars and race teams that can definitely work together and help to make that happen.

“But, you can’t control everything out there. And we’ll just get the green and go racing and just see how it’s working out and how the lines are forming and choosing the right lines. We have to do our job first and then hopefully we can put ourselves in position to either help Junior or have those guys helping both of us to make sure we secure our way to the next round.”

Struggling with the new format

With Earnhardt currently 11th in the standings, 56 points behind first-place Joey Logano, the pressure is on the No. 88 Hendrick Motorsports team to win.

Last year, among the four Hendrick drivers who started the Chase, only Gordon advanced to the Eliminator Round. This season, Kahne wasn’t successful enough to make it into the playoffs. After earning four wins in 2015, Johnson wasn’t expected to fall out after the first round of the Chase—but he did.

Certainly, Hendrick Motorsports’ odds of winning the title improve with 25-percent of the field going into the third segment of the Chase — particularly if the Joe Gibbs Racing Toyotas of Matt Kenseth and Kyle Busch are knocked out in the process.

And that means both Earnhardt and Gordon have to advance to make up a fourth of the remaining Chase field.

For Earnhardt, who qualified fifth and won at Talladega in the spring, the strategy is simple.

“When the race starts, run up front and try to stay towards the lead,” Earnhardt said. “I think it’s important to be in the lead in the last 50 laps of the race, so we’re going to try to be there.”

While Gordon and the other Hendrick drivers have their team orders for Sunday, Earnhardt controls his own destiny — although that’s easier said than done at Talladega where drivers often find themselves along for the ride.

But given Earnhardt’s record at track of six wins, 11 top fives and 15 top 10s in 31 starts, it would be hard to bet against him.

“I’m sure there are some other guys here that are just as confident when they come here,” Earnhardt said. “But, we’ve won here this year and we’ve ran good and won at Daytona over the last several years. So when we come to all the plate tracks we feel confident we can do well and feel confident in the car.”

Earnhardt has led a record 899 laps at Talladega — the most among current drivers, and five more than Gordon. When a driver has spent that much time up front and is racing a car that has won three restrictor plate events this season — the Daytona Duel in February, the Daytona Cup race in July and at Talladega in May — Earnhardt’s belief is his ability is understandable.

“The confidence that you have in the car is really where it all stems from," Earnhardt said. "If you go out there and go through about 50 to 100 laps and the car is just not really showing you what you’re looking for, you lose a little confidence in the ability of the car. And another guy beside you might be going through the opposite situation where his car is awesome and he’s gaining confidence as the race is going on.  And with that confidence, his moves and decisions are different and changing.

“When you don’t believe in the car, you make different decisions. You might not go in a direction you would typically go because you don’t believe the car is capable of making that move without causing you to lose spots, right? When you feel like you have a dominant car like we’ve had over the last several years, you definitely make some moves with confidence and you come into the race with confidence. Until we see anything different, we’ll be confident.”