Gallery: A look back on Jimmie Johnson's legendary career

Jimmie Johnson's career as a full-time NASCAR Cup Series driver will end Sunday at Phoenix Raceway, so let's take a look back on the biggest moments from his Hall of Fame career.

By:
Nick DeGroot
Listen to this article
Announcing his arrival 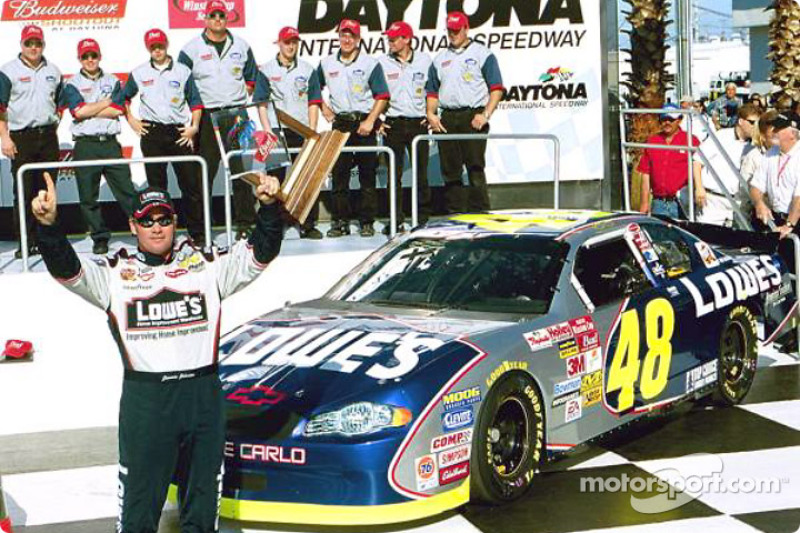 1/18
Jimmie Johnson didn't do much in NASCAR's secondary division, winning just once in 93 starts. But in his first full-time season at the Cup level, he claimed pole position in the season-opening Daytona 500. And he wouldn't have to wait long for Victory Lane to follow.

The first of many 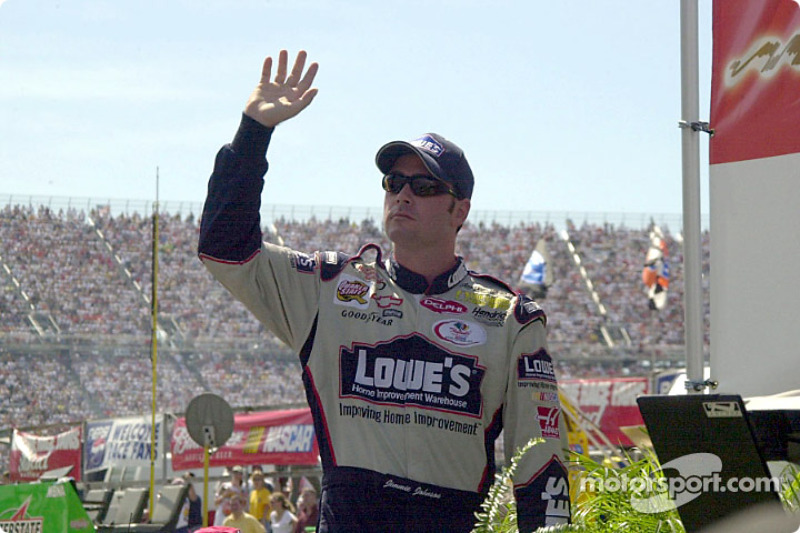 The Chase for the Cup 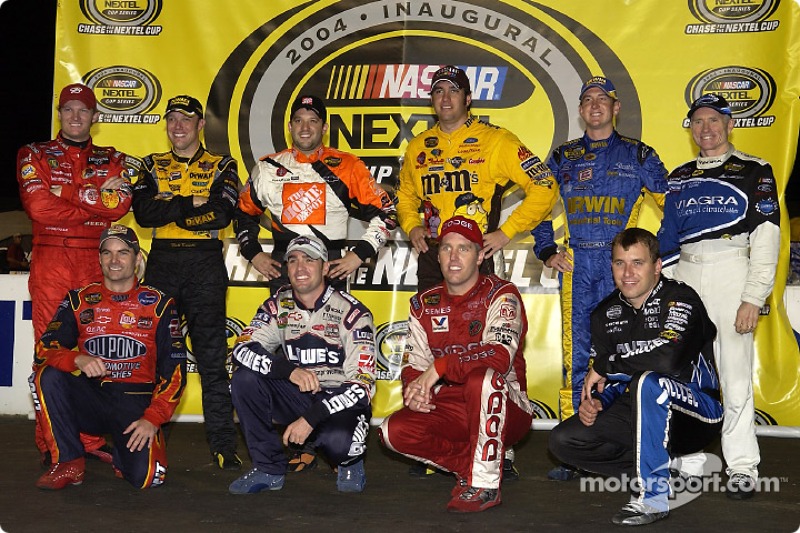 3/18
Although Jimmie Johnson won another three races in 2003 and ended the season runner-up in the championship standings, I'd argue 2004 was his true 'breakout' year. This year was the beginning of the playoff format and Johnson was one of the ten drivers who made the cut. And he nearly won it all, but still emerged with a series-leading eight victories. But there was a shadow cast over this entire season, a tragedy that place off the track.

Tragedy in the air 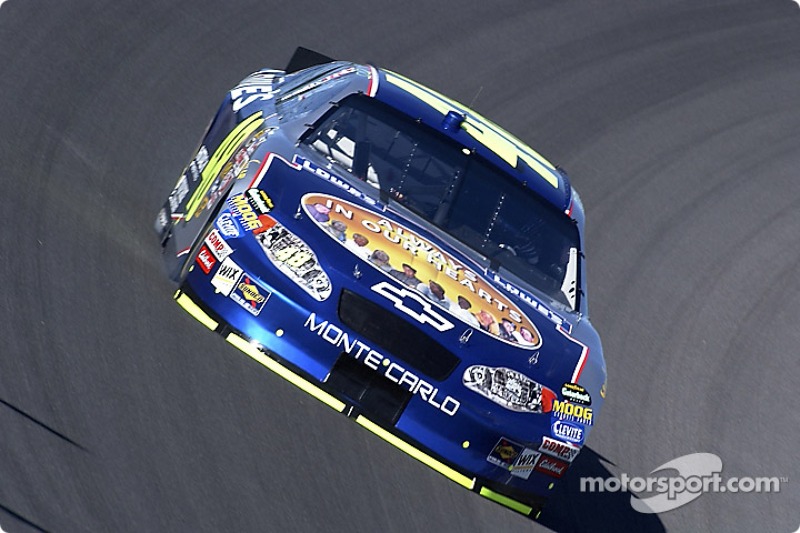 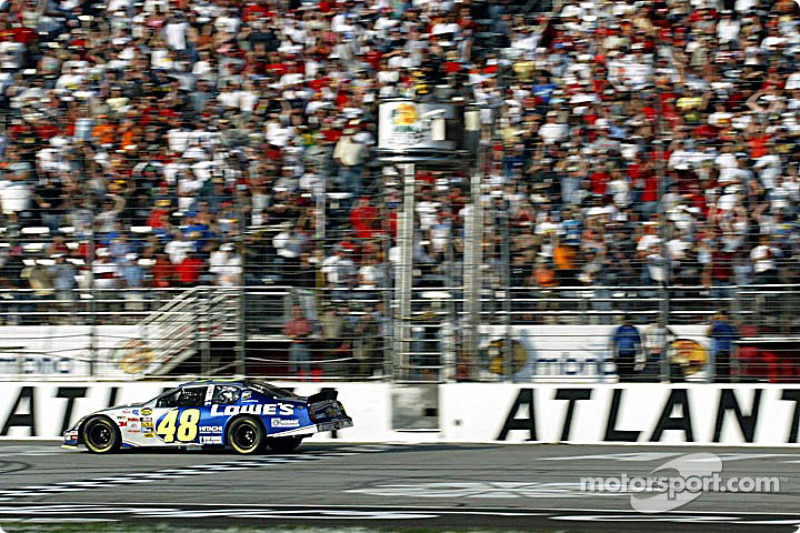 5/18
With a tribute on the hood of each car, Hendrick Motorsports returned to the race track the following weekend. And Johnson won, again. In a moment of triumph in the face of tragedy, all four HMS drivers joined him in Victory Lane. Hats backwards for Ricky, tears flowing and hugs all around after the darkest week in that team's history. But the championship would have to wait, as Johnson would ultimately come eight points shy of the crown a few weeks alter. 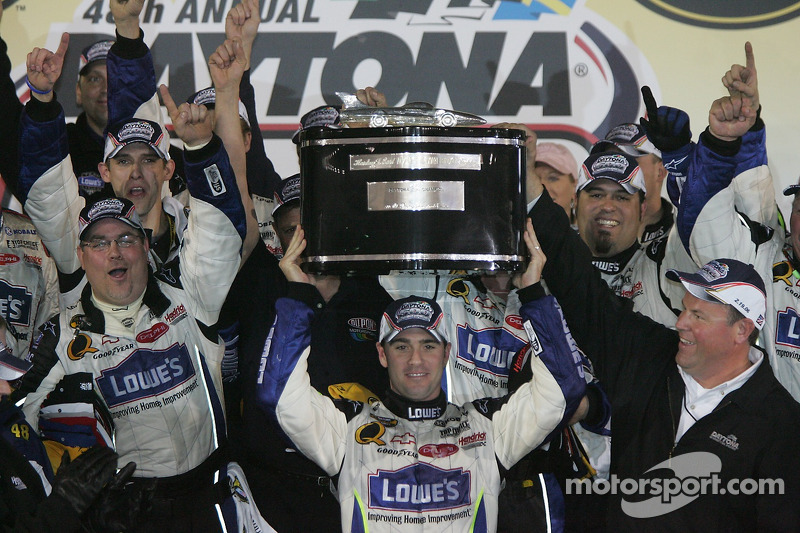 6/18
In February, 2006, NASCAR found an issue with the No. 48 car that resulted in the suspension of crew chief Chad Knaus, a fine and. points penalty. But even without his regular CC atop the pit box, Johnson would not be denied. He won the Daytona 500 in a year that would be a tipping point in NASCAR history. Jimmie Johnson was about to re-write the history books. 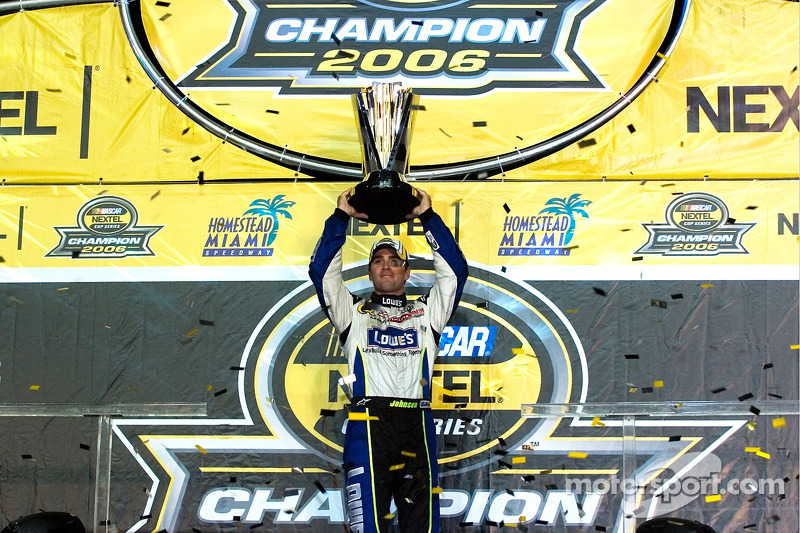 7/18
Jimmie Johnson won his first championship in his fifth full-time season, winning five races on his way to the title.. He took over the points lead from Matt Kenseth with just three races remaining in the playoffs, securing the title with five top-two finishes in the final six races of the year. At the time, no one would have dreamed that this was the beginning of an unprecedented streak. Johnson would not relinquish the crown until 2011. 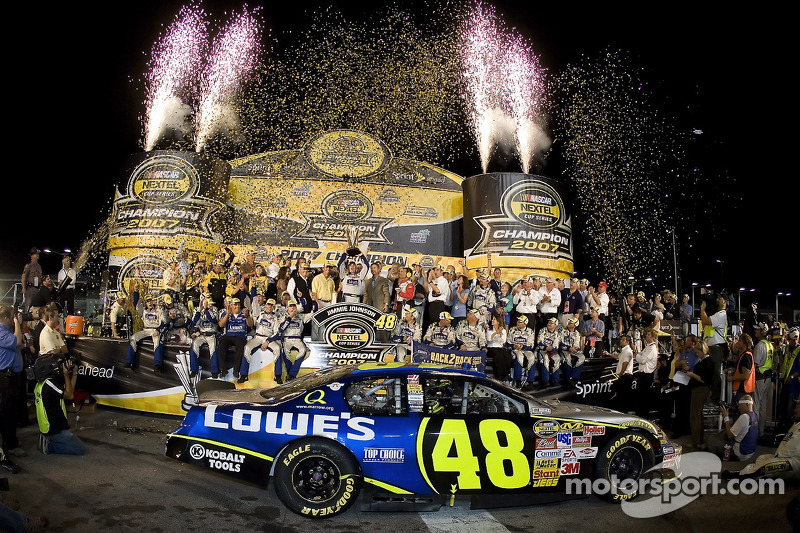 8/18
In the final race for the Gen-5 cars before the Car of Tomorrow fully took over, Jimmie Johnson would claim his second consecutive championship. He was even more impressive this year, winning ten races and beating his iconic teammate Jeff Gordon in the end. No driver has won ten or more races in a single Cup season since. 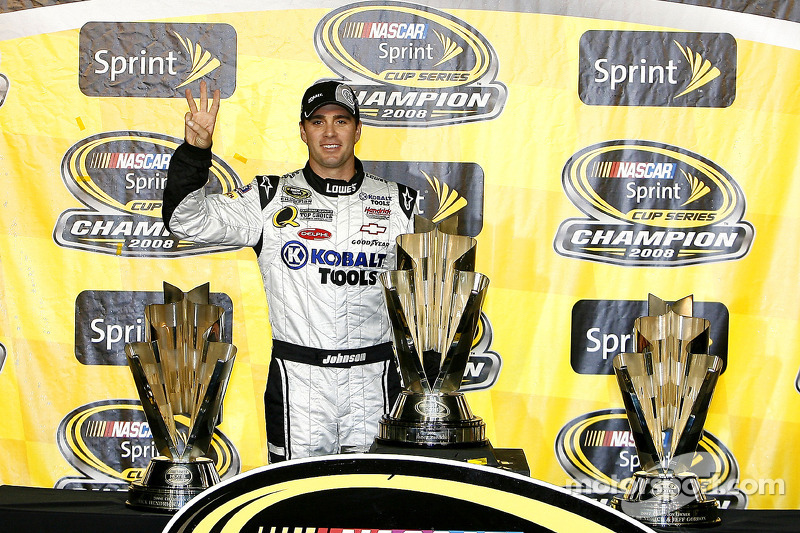 9/18
The COT didn't slow down Johnson any as he and crew chief Chad Knaus collected seven more victories on their way to their third consecutive championship. Johnson took the points lead from Edwards in Race 29 at Kansas Speedway and never looked back, winning the Kansas race despite Edwards' famous last-corner dive where he bounced off the wall. 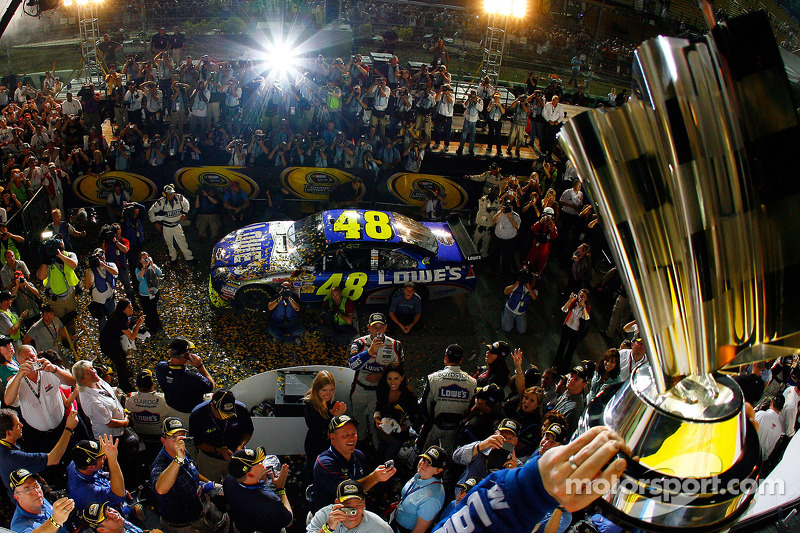 10/18
Johnson found himself battling another Hendrick Motorsports driver for the crown in 2009, but this time it was a 50-year-old Mark Martin. After running a partial schedule the previous two years, Martin returned full-time and proved a worthy opponent to his far younger teammate. The veteran driver had been runner-up in the title fight four times before, never emerging on top, but Johnson would make it a fifth as he claimed the championship for the No. 48 once again. 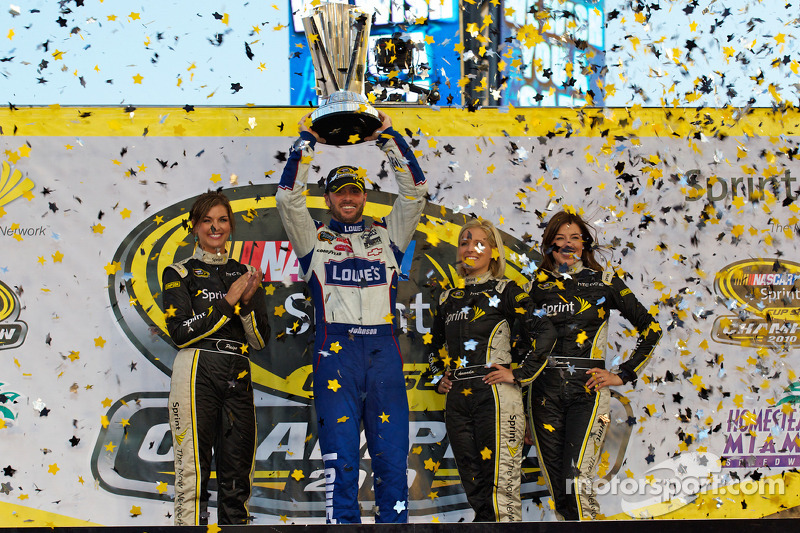 11/18
2010 was the 'one that got away' for Denny Hamlin, but for Johnson, it was just another page in his ever-expanding place in the NASCAR record books. Before the driver of the No. 48, no driver had ever won more than three titles in a row with Cale Yarborough being the only one to ever do it (1976 - 1978). It was unprecedented when Johnson won his fourth straight, but to win a fifth? A feat once thought nearly impossible and even if he never won again, this alone would earn him a place alongside the greats. But of course, he wasn't done yet. 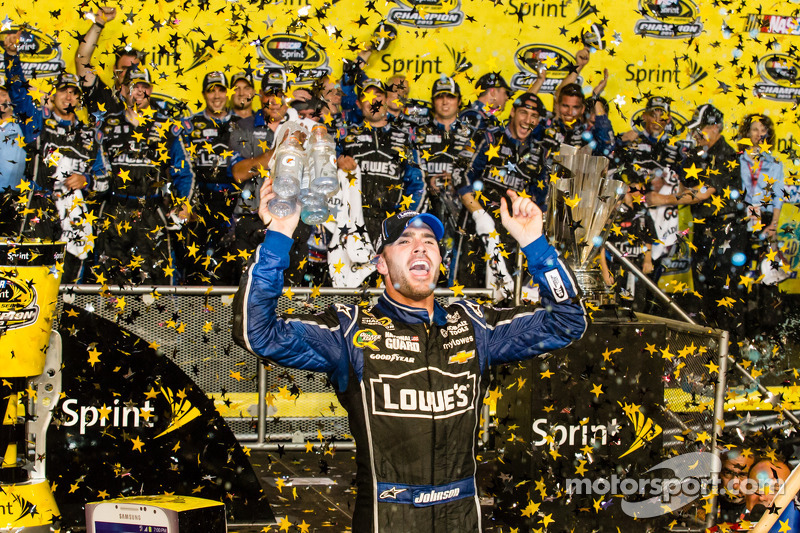 12/18
Johnson picked up seven more wins between 2011 and 201, but i was in 2013, he returned to the top. NASCAR introduced the Gen-6 car and Johnson started the year off right with his second win the Daytona 500. The last time he won the sport's biggest race? 2006 -- the year he claimed his first title. And like '06, Johnson found himself battling Matt Kenseth for the crown. The two drivers were neck-and-neck throughout the playoffs, but a stumble in the penultimate race of the year by Kenseth gave Johnson some breathing room, and a ninth-place finish was enough to secure his sixth championship. 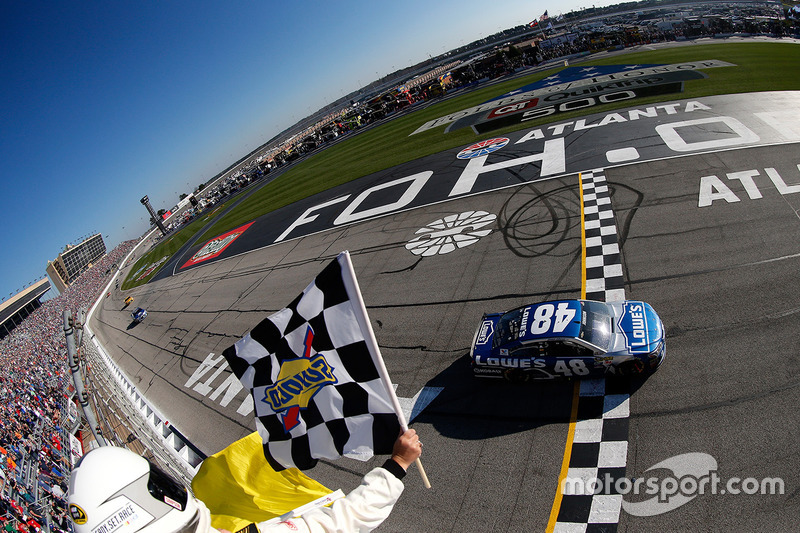 13/18
Before he equaled Eanhardt in titles, Johnson matched him in race wins. Early in he 2006 season, he matched Dale Earnhardt with 76 victories. The two drivers never shared the race track with the legendary driver's passing coming months before Johnson's NASCAR Cup Series debut. 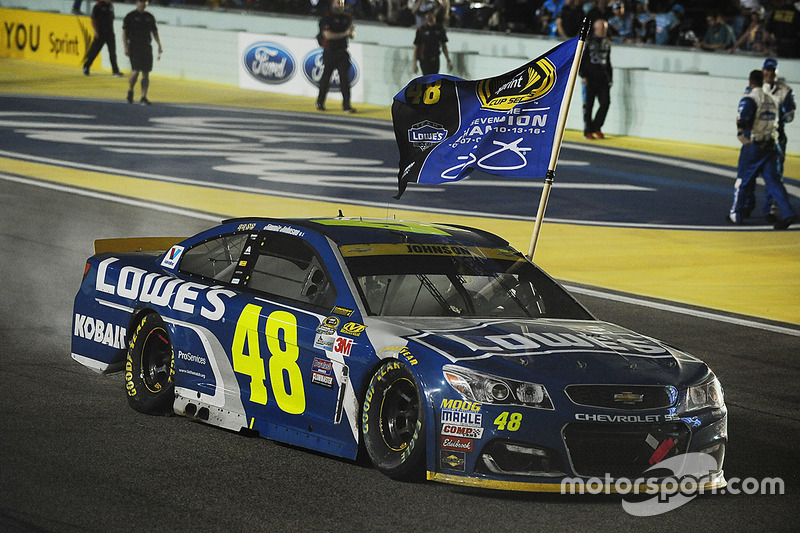 14/18
In 2014, NASCAR introduced a shocking new playoff system. The knockout-style format took a field of 16 drivers and whittled it down to four ahead of the Homestead title-decider. The finale became a winner-take-all event with the four drivers tied in the standings and so, the highest-finishing driver in Race 36 would be named champion. In the first two years of the format, the champion also had to win the race. The problem for Johnson entering the 2016 finale was that he had never won at Homestead before. In the first two years of the format, he managed no better than tenth, so this was entirely new territory for the veteran driver. Well after a late-race crash eliminated title favorite Carl Edwards, Johnson stepped up to the plate and took the lead with just three laps to go, winning at Homestead for the first time in his career and with it, a seventh championship.

Seven-time - Among the legends 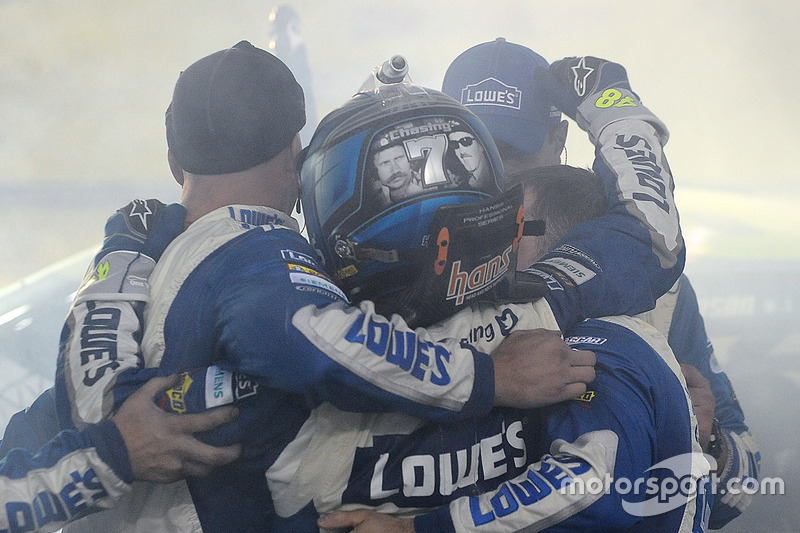 15/18
Johnson's seventh championship was likely the most remarkable as he emerged as a contender only in the final few laps of the race, earning his seventh title and placing himself alongside two of the greatest stock car drivers of all time: Richard Petty and Dale Earnhardt. As of right now, no other active driver is even close to this monumental achievement. 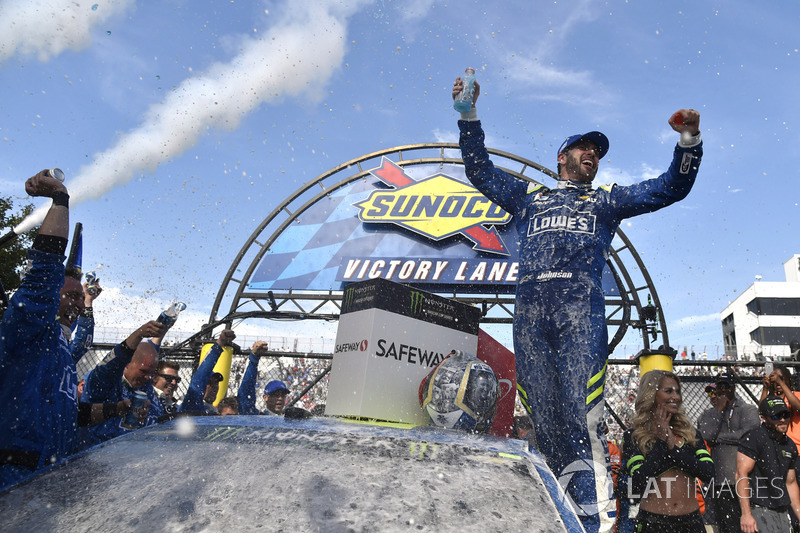 16/18
On June 4th, 2017, Jimmie Johnson led just seven laps to claim his 83rd career NASCAR Cup Series victory. In what would have been a shock to hear then, he never won again. Since that day, Johnson has struggled to find VL with several close-calls. He would eventually part with crew chief Chad Knaus, but with a new aero package and a changing sport, Johnson's time seemed to be coming to an end. In 2020, he said farewell, and Sunday's title-decider at Phoenix Raceway will be his final start behind the wheel of the No. 48 Chevrolet. 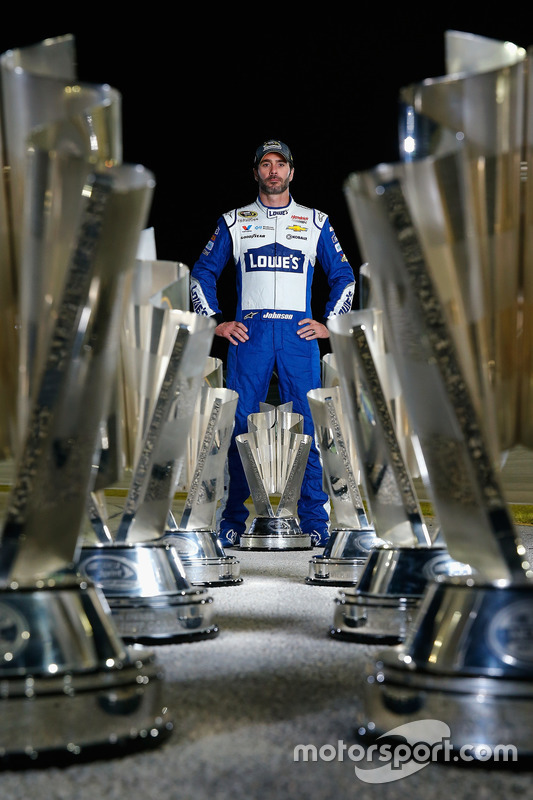 17/18
A career unlike any other. Jimmie Johnson's place in NASCAR history is certain, and his name will reside among the titans of the sport. Even with the slump that has plagued the twilight of his career, it takes nothing away from his prior achievements. He is a champion, in every sense of the word. 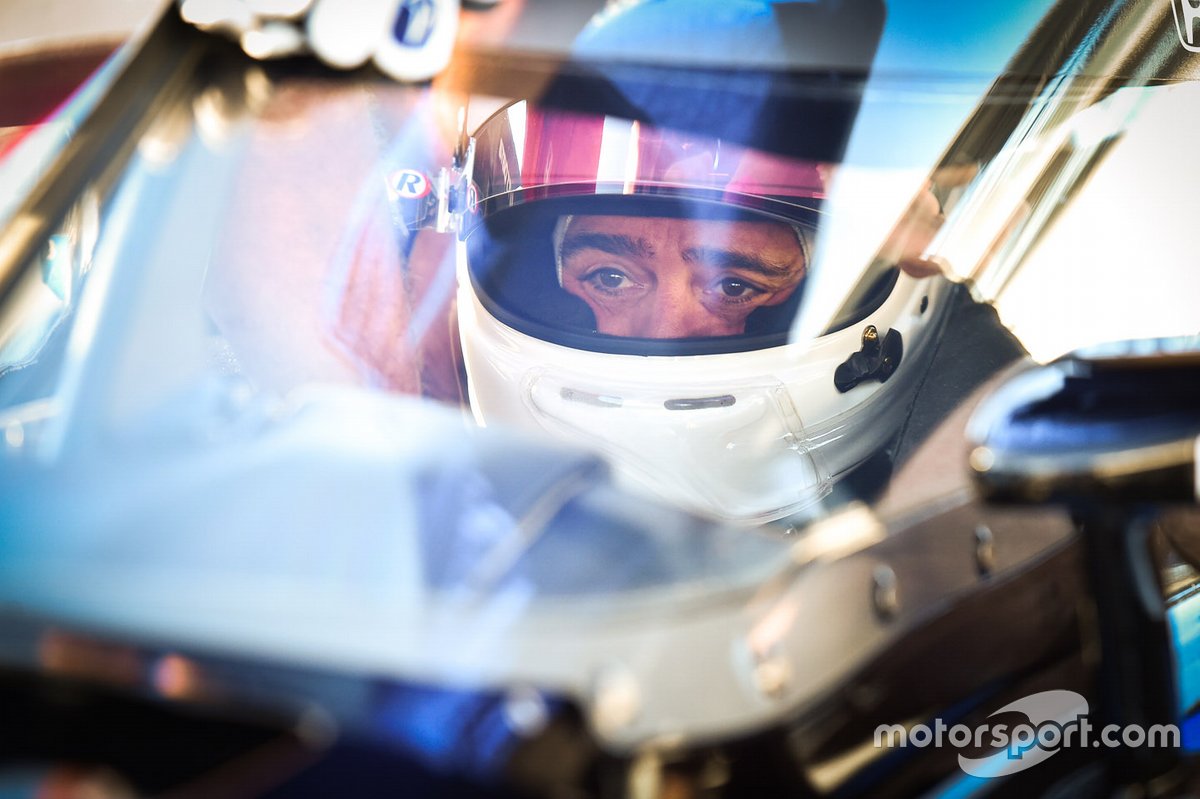 18/18
Oh, you thought he was done? No. Jimmie Johnson may be retiring from full-time NASCAR Cup Series competition, but the 45-year-old racer isn't done racing. He has joined forces with Chip Ganassi Racing to take on a new challenge in 2021 -- IndyCar. He will run every road and street course with the team in a bold move. And who knows, maybe seven-time still has another win left in him..

Toyotas have speed but need better "execution in pit lane"