Superspeedway testing key in developing rules package for 2013 NASCAR Ford Fusion during the holidays prior to the new Cup cars debut in Daytona.

DEARBORN, MI, – It’s only been a month since the 2012 NASCAR Sprint Cup Series season came to an end, but teams and fans alike are already looking forward to what lies ahead next year with the debut of cars like the all-new 2013 NASCAR Fusion.

And while many will be taking a break to celebrate the upcoming holidays with family and friends, most race shops will continue humming as teams build and prepare the new models for competition. The primary focus at the moment is Daytona Speedweeks, which is only two months away, and getting ready for the season-opening Daytona Shootout and Daytona 500. 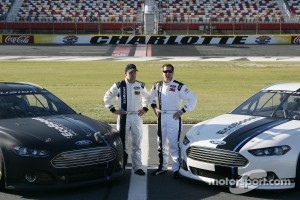 Besides having a new Fusion to run with in 2013, Ford Racing will also welcome Penske Racing back to the program. Car owner Roger Penske is coming off his first NASCAR Sprint Cup Series championship in 2012 as driver Brad Keselowski captured the crown in only his third full season. The Penske organization, which also includes drivers Joey Logano and Sam Hornish Jr., got their first on-track work with Fusion during a recent test at Talladega Superspeedway.

“Ford probably did the best job in terms of what NASCAR wanted,” said Hornish, who handled driving duties at the test. “NASCAR gave them the opportunity to give their race car a little bit more of the look of the actual street car. If you basically slinked up your car and made it into a street race car, this is what it could look like. I think they did a really good job of that and bringing out the character of the car.”

Vice President of Operations for Penske Racing, Mike Nelson, agreed and said, “We’re excited about the Fusion and the way it looks. There’s a lot of buzz about it in the garage and in the shop, so it’s been good so far. It means a lot to the fans and it means a lot to us as well. It’s nice to be able to look at the street car and look at the race car and see the similarities between the two. They’re identical and it’s cool for everyone.”

That individual brand identity among manufacturers was a key element toward instituting this new-generation car, but questions about components like the cooling system was one of the main reasons for having the Talladega test.

“It’s been a challenge to get all the correct features in the car within the design parameters and still having the car competitive,” said Ford Racing aerodynamicist Bernie Marcus. “At the end of the day you can have the best-looking car, but if it doesn’t work on the track, that’s not going to be good so we have to have both. We have to have the looks and the performance.”

Finding the right balance that will allow the cars to remain competitive and put on a good show for the fans is NASCAR’s ultimate goal while making it to victory lane and winning championships is the primary focus for Ford Racing officials and its teams.

“There’s been cooperation to get to the end goal of making the cars look the same on the race track,” said Pat DiMarco, Ford Racing NASCAR program manager. “We’ve done that over the past few months and now we’re working towards our goal of winning the Daytona 500.”

Ford Racing has won the Daytona 500 two straight seasons and three of the last four overall. The next chance for teams to test their superspeedway cars will be Jan. 10-12 at Daytona International Speedway.

Dillon, Buescher, Patrick among next wave of superstars just over the horizon