JOEY LOGANO – No. 22 Shell/Pennzoil Ford Fusion – “We were really good in clean air, which everybody probably is, but in dirty air it’s a completely different car and really, really hard to drive. Overall, it was a solid day and another top five. That’s good, but like I said last week, it’s all about the win.” 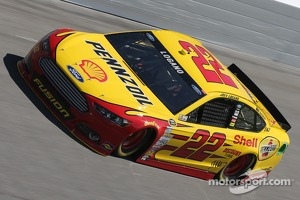 HOW DID THIS NEW PACKAGE WORK? “It was tricky. It was very tough to move around and very tough to pass cars. Whenever I passed one I felt like I deserved a trophy because it was so hard. But, overall, we passed a few cars there. We had a solid car, but were just way too loose all day. We really swung at the thing all day. Todd did a good job of making adjustments to at least get competitive by the end of the race. Our pit stops were good and we were able to have a really good last restart to get our track position back and come home with a top five.”

HOW CLOSE DO YOU THINK YOU WERE TO GETTING THIS ONE? IT ALMOST SEEMED TO BE YOUR RACE? “I don’t think it was. I was happy to get a top-five out of that one. It was looking kind of tough there at the mid part of the race, but Todd did a good job making adjustments for me and giving me a good piece.”

WHAT WAS THE RACE PACE LIKE? “There was a lot of speed out there. You’re in the gas a lot and it was very hard to pass, so when you had an opportunity to pass you had to take advantage of it.”

CARL EDWARDS – No. 99 Aflac Ford Fusion – “A fifth-place finish for our Aflac Ford. We probably didn’t deserve to finish fifth, so I’m pretty happy with that finish. The guys did a great job with strategy. It was a big weekend for Ford. With the loss of Mr. Ford this weekend, if we couldn’t be in victory lane I’m really proud that a Ford was in victory lane both days. Brad did a great job. We’re all thinking of the Ford family and the Bolin family. We lost Ed Bolin this weekend too, a great supporter of NASCAR.”

HOW DID YOU HOLD ON TO THAT CAR? “I didn’t. I don’t know if you saw the right-rear when I hit the wall with it, but it’s a tough duck. We had Aflac on board and I love this race track. I had a good time. Even though we couldn’t get to victory lane it’s a big day for Ford. We lost Mr. Ford and for Brad to win both of these I think it says a lot. We also lost Ed Bolin, a big supporter of NASCAR. We’re thinking of them too. Overall, it was just a fun day. Jimmy did a great job with strategy and we came home fifth.”

TREVOR BAYNE – No. 21 Motorcraft/Quick Lane Ford Fusion – “The thing that comes to mind is that lucky dog at the end. We were racing the 47 hard, but I thought the 2 had already got by the 66 so I didn’t think it was extremely urgent to get by him. I kind of ran behind him for a couple laps and I went to the top and as soon as I cleared him the caution came out but the loop was before that. I was really frustrated that I didn’t try to roll the top a lap sooner to try and get by him. I was working on him, but I should have maybe gone to the top sooner. That’s not a bad run for us. If we can knock out top-20s being a part-time team, and we had a tough day on pit road today. The guys worked hard, but we had a couple rough stops. I felt like we had a 15th-place car at times and passed quite a few cars today, so I’m happy with how the car ran.”