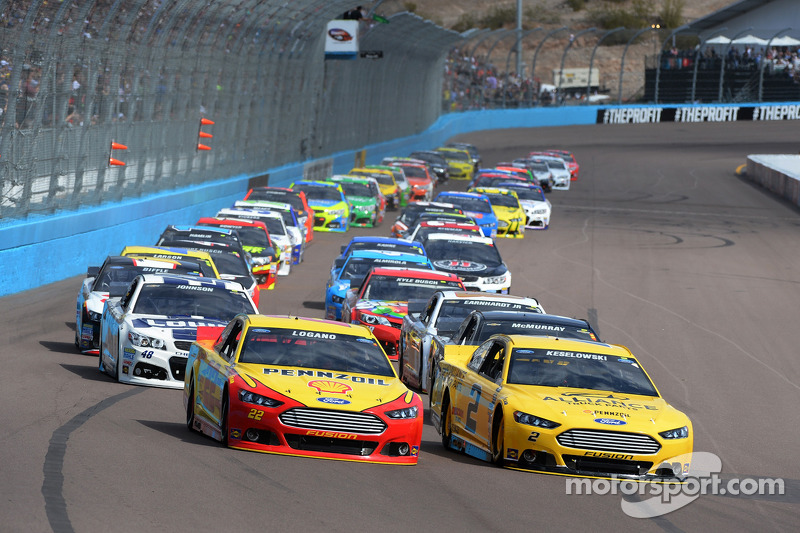 Brad Keselowski: “That was everything we could do to get up there and get third. Nobody had anything for Kevin. We did the best we could and that was really all we had.”

“It feels good to run up front and be competitive. We know under this system wins are the only things that count. Last year you would have said second and thirds were great but this year they are just so-so. We were close. I could see it the whole race and I think some of the long run stuff we were just as good as anybody but then the short run stuff we were just kind of okay. It was a good run either way and something to be proud of and hang our hat on. We just know we have to be a little better and move from here.” 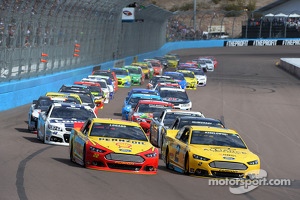 DID YOU GET CLOSE ENOUGH TO KEVIN TO SEE WHERE HE HAD THE ADVANTAGE? “He was good everywhere. I am not sure there wan anywhere he didn’t have an advantage.”

WHERE WAS THE 4 BEATING EVERYBODY? “They beat everybody before they came to the track today. It is a great combination and they were prepared for the weekend. That is a group, Rodney Childers to me is like a rubber stamp carbon copy of Paul Wolfe. He is a great crew chief and it was just a matter of time before he got the right combination that he excelled with. They were really prepared. We saw it all the way through testing, that they were dominant. They showed it when they came to the actual racetrack to race. I would look for big things out of that team. They looked a lot like the 20 car did last year at this time. They have that honeymoon syndrome going on and taking full advantage of it.”

OBVIOUSLY YOU KNEW GOING INTO THE RACE HE WAS GOING TO BE GOOD. HE WAS GOOD IN THE RACE. AT WHAT POINT AS A COMPETITOR DOES THAT GET DEMORALIZING? EVEN IN THE CLOSING LAPS ARE YOU THINKING YOU CAN PULL IT OFF? “Well, I never gave up thinking we had a shot at him. We just had to make a really strong adjustment. I thought in the midsection of the race we were just as good if not a little bit better when the rubber was down on the track. Then all the yellows in a row picked up all the rubber. We really needed that on the track to excel, so we weren't very close to him. I always hope it falls that way, and maybe next time it does.”

WAS IT SEAMLESS WORKING WITH GREG AND BRIAN WORKING OVER THE RADIO? “Yeah, they did a great job. All things considered, I thought they did really well. I was very proud of the effort.”

HAVE YOU TALKED TO PAUL AT ALL TODAY? “I texted him a few times. He texted me when I got out of the car.” DID HE HAVE INPUT? “I'm sure he did. I never heard it directly, but I'm sure he did.”

THIS RACE SEEMED INTENSE FROM YOUR END ALMOST EVERY SINGLE LAP, ESPECIALLY THE LAST COUPLE OF LAPS. CAN YOU WALK THROUGH THOSE LAST COUPLE LAPS WITH JUNIOR. “I thought we were going to wreck each other twice and didn't. That was good, I guess. I would have had a lot of people mad at me if I would have done that. I saw all the fans jumping on their feet when they thought he had a shot at winning. I thought it was pretty cool. Cup racing is the best of the best. You can't really afford to take a lap off with these cars because you just drive them so hard.

The cars two, maybe three years ago took a lot more finesse, which in some ways is good, some ways bad, because the finesse, I thought they took a little more skill to drive. Then again, you could also take laps off and the car would reward you for being nice to it for a couple laps, like a dog or something. The cars aren't that way now. I think that makes the racing a little more intense but then also subtracts away from driver skill set, so it's kind of a trade off.”

IT'S A SMALL SAMPLE OF TWO RACES. AS YOU SAID, WINNING IS ALL THAT MATTERS. DID YOU GET ANY SENSE THAT THAT'S AFFECTING THE RACING? “It is a small sample size. I would say probably a little, yeah. It would be unfair to say not at all. When I got out of the car, my teammate and I, Joey Logano, talked about some moves he tried to pull on the restarts, thought he might have or might have done something different under different scenarios. I could say to that effect he would say yes.”

WHAT DID YOU THINK WHEN YOU SAW JOEY DUCK TO THE INSIDE ON THE LAST ONE? “I thought, Get him, go, maybe I can sneak by all of you (laughter). I kind of was remembering Clint Bowyer at Martinsville in that moment. I was thinking about how everybody wrecked and where to be to get through the wreck to take the lead. That's really what was on my mind. That didn't happen.”

“It was fun out there. I had a really good Shell Pennzoil Ford. That 4 car was just so fast. I was joking on the radio that on the back bumper of that car it says freaky fast and they weren’t lying when they put that on there. We had a really good car, just not as good as his. On that last restart, the last two restarts, I figured I might as well go for it. With a win being so important you might as well go for it and I tried to stuff it in there three-wide and gave up a spot by doing that but overall it is all about the win. We didn’t quite get that today but we will go to Vegas and try again.”

“We had a great race. We just needed to qualify better. We had a fast race car all day but it takes so long to pass people. I really love this place. The track is aging and getting better and it makes it fun. I had a good time, just wish we could have had a better finish. We did it to ourselves on Friday thought. We put ourselves in that spot and it was really hard to get through the field.”