“Ford is our longest running partner. We are incredibly proud to continue our mutually beneficial long partnership with Ford Motor Company and look forward to many thrilling moments on and around the track in the years to come," said Becherer. "Ford is the winningest manufacturer since we started hosting NASCAR’s Championships twelve years ago, and it is only fitting that their name is attached to our championship race weekend in November. History will be made and the drama will be at an all-time high this year with the new format in the Chase for the Sprint Cup Championship during the Ford EcoBoost 400, starting with what will likely be the most compelling qualifying session of the year on Friday night before the Ford EcoBoost 200. I can’t think of a better partner to have than Ford Motor Company as we enter this new era at Homestead-Miami Speedway.” 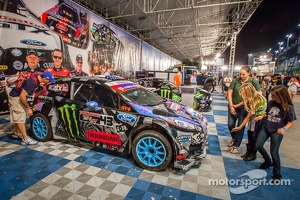 Ford display in the fan area

The partnership was announced at Michigan International Speedway, the racetrack that Greg Biffle gave car owner Jack Roush his 13th victory in Michigan in 2013 aboard a Roush Fenway Racing Ford Fusion. That victory was the 1,000th across NASCAR's three national series for Ford Motor Co., which won the first NASCAR-sanctioned race 65 years ago.

Ford Motor Company’s agreement with Homestead-Miami Speedway is a five-year deal with an option to renew for an additional five years. Other details were not disclosed.

Ford will continue to introduce fans to its award-winning product line, such as F Series trucks, Mustang, Explorer and Fusion through a 20,000-square-foot display during Ford Championship Weekend Nov. 14-16. Ford also uses the official pace car program as an opportunity to showcase its latest products, and will announce the unique pace vehicle for the Ford EcoBoost 400 later this year. Among the pace vehicles in recent years include the Fusion Hybrid, the Bullit Mustang, a Ford Police Interceptor and the “hero Mustang” from the movie “Need for Speed.”

“Extending this long-term sponsorship agreement with Homestead-Miami Speedway is great opportunity for Ford,” said Hinrichs. “The Ford Championship Weekend has been a very successful event for us over the past 12 years, especially the chance for the fans to take part in our interactive consumer display with our latest production cars and trucks. With the exciting changes to NASCAR’s Chase playoffs this year, we know this should be a big weekend for all of us.”

Buescher loses out on Daytona win: "This one stings a lot"