For Gordon, Stewart all roads lead to the Brickyard 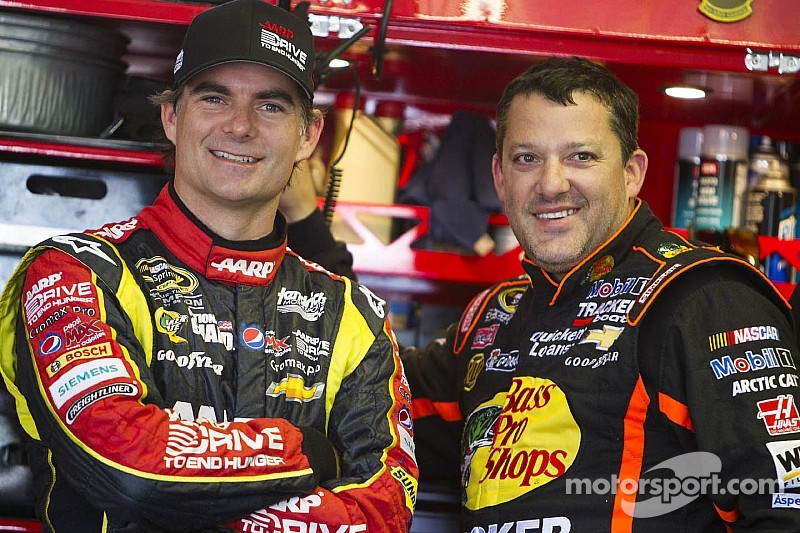 While Jeff Gordon embraced the opportunity to race at Indy, it took Tony Stewart a while time to warm to the idea

Tony Stewart and Jeff Gordon took two different career routes, but both roads ended up at the Brickyard.

Stewart, 43, was born in Columbus, Indiana, grew up racing go-karts and won the World Karting Association title in 1987 before graduating to Midgets.

Gordon, who turns 43 on Aug. 4, hails from California and started racing quarter-midgets when he was five. He spent his formative years in Pittsboro, Ind., where there were more opportunities for aspiring racers.

A change of plans

Gordon was the top USAC Midget rookie in 1989 and won the title the following year. Stewart was USAC rookie of the year in 1991 – the same season Gordon became the youngest driver to win the USAC Silver Crown championship. For Gordon, the next logical step was IndyCar. However, without sufficient funding or sponsorship, Gordon abandoned his open-wheel roots for an opportunity to drive stock cars. He ran one Busch Series race in 1990 and competed on the tour the next two seasons.

After Rick Hendrick watched Gordon win from the pole in the 1992 Atlanta spring race, he signed him to a Cup ride. Gordon made his debut in the No. 24 Chevy for Hendrick Motorsports in the 1992 season finale at Atlanta - also Richard Petty's last race - then ran for rookie honors the following year.

It was during his freshman season in Cup that Gordon first had the opportunity to test at Indianapolis Motor Speedway.

“My love for Indianapolis and the Indianapolis 500 goes way back to when I was racing in California, and I was racing open wheel cars on an oval, and so sprint cars at Indianapolis were what I looked up to and what I loved to watch as a kid,” Gordon said. “The drivers were my heroes.  The race was one that I always put on the calendar that I was going to watch.  I got a chance to go there as a kid when we traveled from California to Indiana to go visit the museum, go out to the racetrack as well as watch the race one particular time, and I was just in awe of the place.

“I always wanted to race there, and to get that opportunity, especially an opportunity to win, it just is a way to live out a childhood dream.”

I got a chance to go there as a kid when we traveled from California to Indiana to go visit the museum, go out to the racetrack as well as watch the race one particular time, and I was just in awe of the place. I always wanted to race there, and to get that opportunity, especially an opportunity to win, it just is a way to live out a childhood dream.

For most, the buzz builds

While the anticipation of the Brickyard 400 grew for stock car enthusiasts and drivers such as Gordon, who yearned to race at 16th and Georgetown, that wasn’t the case for open wheel traditionalists such as Stewart.

“Honestly, I was one of them that absolutely thought it was a crime initially,” said Stewart, who grew up 45-minutes from the 2.5-mile oval. “I'm a purist.  I'm old school.  It's always been sacred ground to me.  I remember when they did the tire test there and everybody ‑‑ there was so much excitement after that -- and that really didn't even get me to switch sides.”

Honestly, I was one of them that absolutely thought it was a crime initially. I'm a purist. I'm old school. It's always been sacred ground to me.

Tony Stewart on his first impression of stock cars at Indianapolis

Gordon, however, experienced every minute of the 1994 Brickyard 400 from the tests, to the practices, the race and eventually Victory Lane. He remembers “the madness and craziness of how big that event was” and how it not only attracted stock car loyalists but new fans as well.

“Even if you go back to the test that we had, the fans were just lined up on the fence around the garage area just wanting to see stock cars race at Indianapolis, and it was much of the same when it came to race day, just so many fans and you just couldn't walk anywhere without getting mobbed,” Gordon said. “That just showed you the impact and significance of that inaugural event.”

As Gordon was making history at Indianapolis Motor Speedway, Stewart was racing in Illinois. When he returned home that evening, curiosity got the best of him. He watched the replay and immediately had a change of heart.

“It was very evident that this was something that wasn't breaking religion so to speak or sacrilegious for it to be there,” Stewart said. “It really showed why NASCAR belonged there.”

Stewart continued his open wheel course. He won the Midget National title in 1994 and the following year became the first driver to win the USAC Triple Crown – Midgets, Sprints and Silver Crown – all in the same season. In 1996, Stewart made his IndyCar, Busch and truck series debuts. He entered the Indy 500, won the pole but finished 24th after his engine failed.

One year later, Stewart won the IndyCar title driving for John Menard and finished a career-high fifth in the 500. By 1998, Stewart was making his transition to stock cars with Joe Gibbs Racing. As a Cup rookie in 1999, Stewart made his first NASCAR appearance at IMS. Three years later, he won his first pole. In 2005, Stewart won his first of two Brickyard 400 races.

“It's just one of those things that when you're growing up around open‑wheel cars and around stock cars a lot, the thought of it wasn't the best at first,” Stewart said. “It really just seeing the way everybody around Indianapolis felt about it, especially the racing community, there are so many race teams around there.  The racers are the ones that really didn't like it.  They were more of the purists.  But I think everybody changed their mind and their opinion after they saw that first one.

Stewart has taken advantage the opportunity to run both the Indy 500 and the Brickyard 400 in the same year twice. His average finish of 7.9 at IMS is the best on the Sprint Cup tour.

And no matter how motorsports evolves in the coming years, for Stewart, Indianapolis Motor Speedway will always be “sacred ground”.

“It always has been, always will be,” Stewart insisted. “I don't care how many times you win there, it's never enough.  It's nice to have won two races already there.  That gives you confidence of knowing what you have to do to win.  It's just a matter of doing it.”

Kenseth encouraged after Sprint Cup practice for the Brickyard 400