It was a night of highs and lows for Danica Patrick on Saturday at Charlotte (N.C.) Motor Speedway.

Patrick won the Sprint Fan Vote to gain entrance into her first NASCAR Sprint All-Star Race, which was a high for the Rookie of the Year contender. But she fought a tight-handling No. 10 GoDaddy Cares Chevrolet in the 90-lap non-points event and finished 20th. 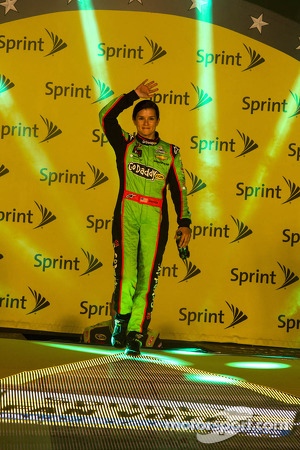 “First and very foremost, thank you to all the fans who voted for me or maybe voted so many times for me,” Patrick said. “I’m very fortunate to have the fan base that I do, and I never forget that. It really just makes me feel bad to win the Sprint Fan Vote and run in the back of the race.

We just couldn’t get the GoDaddy Cares Chevrolet right. We were just too tight. The guys did a great job on pit road. That goes without saying. It was just a tough night, but hopefully we are able to figure out what was wrong, and we can come back here next weekend and have a better run.”

Patrick earned entry into the race by being the recipient of the fan vote on NASCAR.com. Patrick was eligible for the fan vote by competing in the Sprint Showdown, the undercard event to the Sprint All-Star Race. Patrick started seventh in the 40-lap race, which was broken up into two 20-lap segments.

After winning the fan vote, Patrick started 22nd in the 90-lap All-Star race. While Patrick had a solid racecar in the Sprint Showdown, that wasn’t the case in the All-Star race.

Just five laps into the event, Patrick radioed to crew chief Tony Gibson that her GoDaddy Cares Chevrolet was too tight, which became the theme of the night.

Gibson called for a variety of major chassis adjustments during the race to aid Patrick’s tight-handling condition, including track bar, wedge and air pressure adjustments.

The crew also made a variety of shock adjustments. But as the laps clicked off, the handling characteristics of the GoDaddy Cares Chevy didn’t improve, and Patrick continued to tell her crew her racecar wouldn’t roll through the center of the corner, preventing her from gaining spots on the racetrack.

Gibson was frustrated with the car’s performance but pleased Patrick got valuable track time, which could help the rookie in next week’s Coca-Cola 600.

“The car was pretty good the first race, and the second race I don’t know what happened,” Gibson said. “It was plowing tight from the very first lap on, and we couldn’t get it fixed. We slung everything I know to sling at it.

Maybe we had a bump stop or a shock give up on it, but I just don’t know right now. Everybody dug all night long and we stayed in the game, and that’s all you can do. It’s frustrating because you don’t know what happened. We’ll try to figure out what we’ve got.

“We just want to thank all the fans for getting us into the race because we never would have been in it if it weren’t for them. We appreciated the support from them, and hopefully one day we can give a little bit of something back to them.

Overall, we learned a lot and she got some time on the racetrack, so that will pay dividends next week, I think. It’s just frustrating. I thought we would run way better than that based off our first race there. I’m not sure what happened and what went wrong there.”

Jimmie Johnson won the All-Star Race, his record-breaking fourth victory in 12 All-Star starts, breaking a tie with Jeff Gordon and Dale Earnhardt for the most All-Star Race wins. Johnson’s past All-Star Race victories came in 2003, 2006 and 2012.

The NASCAR Sprint Cup Series returns to point-paying racing Sunday, May 26 with the Coca-Cola 600 at Charlotte. The longest race on the Sprint Cup schedule gets underway at 6 p.m. EDT.

Fourteenth for No. 14 Tony Stewart in All-Star race