Eye In The Sky: Tho duo who guided Ryan Blaney to victory at the Roval 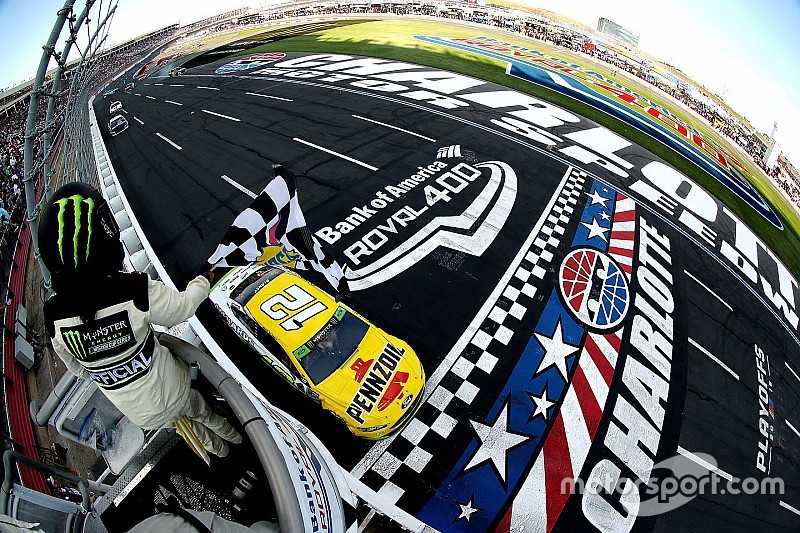 This week, Motorsport.com caught up with both spotters who helped Ryan Blaney win the first race held on the Roval course at Charlotte Motor Speedway.

Josh Williams is the primary spotter for Blaney and has worked with Blaney since 2015 while Team Penske crew member Brent Wentz has been assisting on road courses, including this past weekend's Bank of America 400.

With a pair of spotters being used Motorsport.com spoke with both spotters about working with Blaney at Charlotte.

How did you team up with Ryan Blaney?

Josh Williams - In 2014 I was spotting for A.J. Allmendinger and then I had an opportunity to move over to the Wood Brothers in 2015 with Ryan and I’ve been with him ever since.

Brent Wentz - I have been with Team Penske for 4 years as a Car Chief on the NXS side and have won a few championships and won a handful of races with Ryan behind the wheel. He is a true talent in the sport. With the addition of the 12 car to the Team Penske lineup I knew there would be a chance to help out spotting a few races this season, so I got with Josh Williams and we agreed it would be beneficial to have the same players for every game basically and here we are.

What made spotting the Roval race unique for you?

Josh Williams - It was really cool to have a new event and a new atmosphere with a road course race where we could see almost all of the track which is unusual for us. The biggest thing we faced was just the unknowns of what to expect.

Brent Wentz - There were plenty of unknowns going into the event on Sunday.There was practice throughout the weekend, but never really any competitive restarts and typical race traffic to deal with. Getting comfortable with how the drivers were going to adjust their styles of racing throughout the event was something I really tried to focus on. Being on the “Playoff Bubble” was an interesting twist to the day also, in the end the 12 Team as a whole put their car in a position to clinch a playoff birth and also to capitalize on others mistakes to take the win. It was definitely “Unique”

What was the first thing you thought when you saw Johnson and Truex spinning on the final lap?

Josh Williams - The first thing that came to mind to me was ‘did that just happen’? It happened all so fast and was exciting. I just focused on trying to help Ryan get through that incident and really didn’t have time to think too much about it.

Brent Wentz - I had watched the pair of them race through the section I was spotting (Turn 1 through Turn 8) on the last lap. They were racing each other pretty hard, I mentioned to Ryan over the radio to watch them ahead, I had a feeling it was going to get busy in one of the two remaining chicanes. They didn’t disappoint!

How long have you been spotting?

Josh Williams - I started out helping Scott Speed in 2011 as we are good friends and play a lot of golf together, and when he started in NASCAR I spotted for him.

Brent Wentz - I have mostly been a second spotter when needed at Road Courses & Indy for about the last 10 years, started doing it on a whim with Matt Kenseth on the 17 car in the mid 2000’s, also had a few NXS stand alone races as Primary Spotter for Chase Elliott. I have always been a Car Chief/Mechanic so most of the time I’m focused on that side of things, spotting is just something I really enjoy when the timing is rite and the opportunity presents itself.

What is the most challenging aspect of your job as a spotter?

Josh Williams - I think the amount of time we spend up in the spotter's stand or roof on race weekend. Some days we spend up to 10-12 hours up there if we spot our Cup car and another car in another series. Not that it's bad or anything, but some days are very hot and can be cool too. You have to make sure you handle things in a way to stay sharp and focused for your driver.

Brent Wentz - Challenges are spread throughout our sport in many aspects. I think when you have been around racing long enough, they blend in with your everyday job. On the spotting side I would say keeping the driver calm and also keeping yourself in check as well when things aren’t going as planned. There is plenty of adversity every weekend, the teams/people that can overcome those usually end up on top or close to it.

Do you spot for anyone besides Ryan during a race weekend?

Josh Williams - I usually spot for Austin Cindric as well in the Xfinity Series.

Brent Wentz - Josh Williams and I chatted during “The Roval” week and though it would be beneficial for us to spot the NXS race with Austin Cindric to build some chemistry for Sundays race with all the trade off points this track requires. Having that race under our belts was a definite help leading up to the proceeding race the following day.

How do you help keep your driver calm during a race?

Josh Williams - Well I try to let Ryan know if something happens early in the race that there is plenty of time to overcome anything. I try to talk to him if things are going a certain way and trying to improve on it. Usually like something in a first stage of a race I try to help remind him we still have time to make it better.

Brent Wentz - I haven’t dealt with keeping the drivers calm during the race..usually trying to keep myself calm on the pit box! But from listening to seasoned drivers/spotters the last 20 years, I feel like being positive even when things aren’t going great goes a long way on the radio. Negativity is like gasoline being poured on an already lit fire, so positive words/actions go a long way.

What is the most rewarding part of your job?

Josh Williams - I honestly really enjoy watching the team react when we won last Sunday. We were back in third and I think none of us were expecting to win so when things happened the surprise and happiness of the team was fun to see.

Brent Wentz - Winning is always most rewarding, but knowing you put forth maximum effort and preparation throughout your weekends at the track is what’s most important. Your day could end on a bad note within seconds fastest car or not. So that goes along way in my book.

Do you feel some of your experience driving/working etc. in racing has helped you as a spotter?

Josh Williams - Although I competed in the Allison Legacy Series and some Legends cars, I don’t think the driving I did can help much at this level. However, I do feel my experience as a former professional golfer and the mental capacity you have to have while competing has helped me work with drivers as a spotter.

Brent Wentz - I have been around racing my whole life, I’ve watched all forms of racing from the grandstands, wrenched on them and even did some driving myself along the way. All those things help you understand the sport and also makes you more versatile within the team you work for. Experience and learning from your peers who do those jobs every week makes any job easier.

What is something the fans might not realize a spotter goes through working each weekend?

Josh Williams - I don’t think fans realize how long our days are on the roof or in the spotters stand. We can be outside in the elements for up to 10 hours or more during a day and that can be challenging with the heat and length of the day.

Brent Wentz - This isn’t a question I can honestly answer not being full time on the stand like the guys that do it every weekend. Each job within the sport has its challenges, so I’m sure Josh can rattle off a few from his experience on a weekly basis.

NASCAR Roundtable: Was the Charlotte Roval a success?

Video: Take a look back at the chaos from the Charlotte Roval