Expect the unexpected at Daytona 500

While Kevin Harvick, Matt Kenseth and Jeff Gordon come to mind at possible repeat winners of the Daytona 500, there are plenty of others who more than capable. Those include Tony Stewart and rookie Danica Patrick

The NASCAR Sprint Cup Series may have already run the Sprint Unlimited and two Budweiser Duel races at Daytona (Fla.) International Speedway, but the 2013 season officially kicks off on Sunday with the 55th running of the Daytona 500. It's the first points-paying race of the year and the first of event of the season in which all 43 competitors are in the same race.

First and foremost, our thoughts are with the fans injured on Saturday as a result of the last-lap crash during the Nationwide Series race at Daytona. But the racing on Sunday, specifically in the Daytona 500, will go on.

When it comes to restrictor plate racing, the Daytona 500 included, one motto of the on-track action should be, "Expect the unexpected." And that motto should also carry over to victory lane. After all, who predicted that Trevor Bayne would win the 2011 Daytona 500, or that Derrike Cope would beat then-still-Daytona-500-winless Dale Earnhardt in the 1990 event? 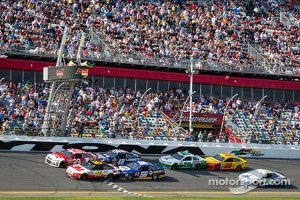 Even though there are unexpected winners of NASCAR's marquee event here and there, there are a handful of drivers that are expected to run well and are typically favorites to begin the 2013 season with a trip to Daytona's victory lane.

Considering the results of the aforementioned exhibition events, Kevin Harvick, driver of the No. 29 Richard Childress Chevrolet, would have to be on a list of favorites, even if it's a short list. Harvick is in his last year behind the wheel of the No. 29, but he's already shown in Daytona that his team isn't a bunch of lame ducks by any stretch of the imagination. With the Unlimited and the Budweiser Duel complete, Harvick and company have two wins to show for the two races they've run. Don't be surprised to see more of the same come Sunday.

Then there are a few drivers from among those expected to be on Sunday's starting grid with multiple Daytona 500 wins. Matt Kenseth won last year's race from behind the wheel of the No. 17 Roush Fenway Racing Ford. It was Kenseth's second Daytona 500 win, as he also drove into victory lane just a few years prior in 2009. Kenseth has since moved on to the No. 20 Joe Gibbs Racing Toyota, but a win early on with his new team isn't out of the question.

"As far as our chances, I don't know," Kenseth said. "I feel really good about our equipment." Joe Gibbs Racing hasn't seen one of its drivers win the Daytona 500 since Dale Jarrett drove the No. 18 into victory lane in 1993, but that doesn't mean the organization, as a whole, hasn't traditionally run well there. 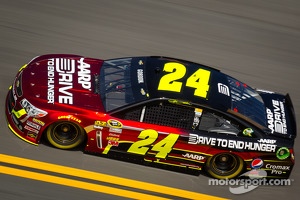 Among current drivers, Jeff Gordon has the most Daytona 500 wins with three from behind the wheel of the No. 24 Hendrick Motorsports Chevrolet. The most recent Daytona 500 victory came in 2005, maybe the driver once nicknamed "Wonder Boy" and now referred to by at least one television broadcaster as "Big Daddy" is due another win at Daytona.

The one other driver among the current group with multiple Daytona 500 wins is Michael Waltrip with two. He'll be behind the wheel of the No. 26 Toyota of Swan Racing on Sunday. Maybe it's because he's with a still-new-to-the-sport team or the fact that he doesn't climb behind the wheel anymore, but for whatever reason, Waltrip just doesn't come to mind as a favorite quite as much as a handful of other drivers.

But again, this is Daytona, so expect the unexpected. Don't forget Bayne and Cope. And speaking of those two, Bayne will be in this year's race in the No. 21 Wood Brothers Racing Ford he took to victory lane just a couple of years ago.

Then there are the non-Daytona 500 winners who still seem to get mentioned among favorites. Tony Stewart, driver of the No. 14 Stewart-Haas Racing Chevrolet, comes to mind. On Saturday, he claimed the win in the Nationwide Series race, his fifth win in that race in the last six years. Yes, that's Nationwide, not Sprint Cup. But still, Stewart does seem to always run well at Daytona. 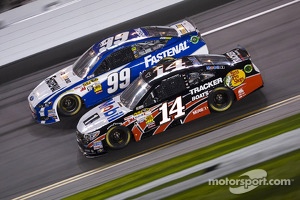 "We’ve made it through the whole week without a scratch on that car and it’s about as ready as it can get for the 500," Stewart said of his car for this year's race. "So I’m excited. I feel like we’ve got a car that’s capable of winning the race. It’s just a matter of whether the driver does a good job behind the steering wheel and puts it’s it the right positions.”

Then there's the pole sitter and one of Stewart's employees, Danica Patrick in the No. 10 Stewart-Haas Racing Chevrolet. She made history a week ago by becoming the first woman to claim a Sprint Cup Series pole, taking the top starting spot for this year's Daytona 500. Will she make more history on Sunday by becoming the first female Daytona 500 winner? She has entered the conversations of some as a possible victor.

"I think when pressure's on, when the spotlight is on, I do feel like it ultimately ends up becoming some of my better moments, better races, better results," Patrick said.

In NASCAR racing, the spotlight doesn't get much bigger than it does in Daytona.

But again, this is a race in which we've learned to expect the unexpected. So I guess when you really get down to it, you probably shouldn't count out any of the 43 starters, and Patrick's one of those 43.

As far as making a prediction as to who will be hoisting the trophy in victory lane on Sunday, this one's too close to call.

Bad luck continues for Edwards at Daytona, Kenseth goes out while leading

Larson waited for 'a mistake' from Truex but it never came

Cole Custer plows inside wall after contact with Anthony Alfredo

Recap: Luck be a ‘Lady in Black’ for Martin Truex Jr.

Sauber has a good Friday practice in Austria