Even after a championship, Brad Keselowski is fighting for acceptance

There was urgency in Brad Keselowski’s voice—because there is an abiding urgency in the soul of the 2012 NASCAR Sprint Cup Series champion.

After Saturday night’s dominating victory in the Quaker State 400 at Kentucky Speedway, there was urgency in Brad Keselowski’s voice—because there is an abiding urgency in the soul of the 2012 NASCAR Sprint Cup Series champion.

“I really want to win a second championship,” Keselowski said repeatedly after climbing from his winning No. 2 Team Penske Ford.

That was after he won the race with a late-race pass of Kyle Busch and locked himself into the Chase for the NASCAR Sprint with his second victory of the season.

That was before he sustained a freak injury when a champagne bottle shattered in his hand. The resulting gash prompted a trip to the infield care center for stitches before he reappeared for his post-race press conference.

With his hand securely bandaged, Keselowski elaborated on his quest for a second title. After he won the championship in 2012, Keselowski failed to qualify for the Chase last year, an experience he describes as “humbling,” and one that only served to heighten the immediacy of his desire to win a second Sprint Cup. 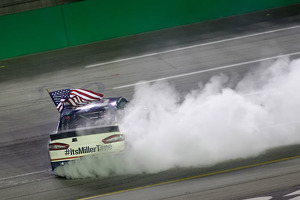 “I turned 30, and I'm going through a bit of a mid-life crisis,” Keselowski quipped before he turned serious. “I want to win another championship. I don't want to just win one. I think I have the team to do it, with (crew chief) Paul (Wolfe) and the guys. I have the owner to do it with Roger Penske, and the urgency is now.

What Keselowski said for public consumption on Saturday night, however, doesn’t plumb the full depth of his desire.

Even with 12 Sprint Cup wins and titles in both the Cup and Nationwide Series, Keselowski still considers himself an outsider. Even though the inner circle of NASCAR stars has expanded geographically over the past two decades, Keselowski isn’t part of it.

By the time he started his first full season in Sprint Cup racing in 2010, Keselowski already had raised the hackles of his fellow competitors. Run-ins that season with such established stars as Carl Edwards and Denny Hamlin didn’t help matters.

Through it all, Keselowski remained brash and outspoken, traits he acquired while growing up in Detroit as the scion of a hardscrabble racing family. Even after the Cup championship, however, Keselowski still feels something like the smart kid who wins the high school spelling bee but can’t get the time of day from the head cheerleader.

Nine days before he won at Kentucky, Keselowski reflected over lunch on why he’s still fighting for acceptance.

“Some would go by your longevity, how long you’ve been in the sport. And I would say others would go by your star power, with respect your fan base and maybe media prowess. So everyone’s fighting to be at the top.”

And some drivers resent an upstart trying to steal their thunder, even if he happens to win a title.

“I think (the championship) got me closer,” Keselowski said. “When it comes to the old boys’ club, I would say their metric for measurement is probably longevity, and when you look across the board as it pertains to those who’ve had success in the sport—success in the tangible form of winning races and winning championships—I’m by far the youngest.”

And, as Keselowski would admit, he hasn’t always done what’s necessary to curry favor with his peers. Rookies are supposed to “race with respect,” code words for conceding positions to veteran drivers without a fight.

Keselowski simply isn’t wired that way. From day one, he made that clear to his fellow competitors in no uncertain terms—at the cost of hurt feelings and damaged race cars.

A second championship is Keselowski’s burning passion in part because he still feels to some degree like an interloper, an “immigrant” into the established world of NASCAR racing, as he put it.

Where Keselowski’s second 2014 win means a berth in the Chase, a second Sprint Cup title would mean infinitely more.

For one thing, it’s an all-but-certain ticket into the NASCAR Hall of Fame.

Keselowski already has realized a vision of himself and his career that few others might have thought possible.

Doubtless he can also foresee his own induction ceremony at the Hall of Fame—and anticipate the sense of belonging that will bring.

That’s why he wants it so much.

Masters of the game: Terry Labonte

Boys will be boys – A talk with 'The Captain'