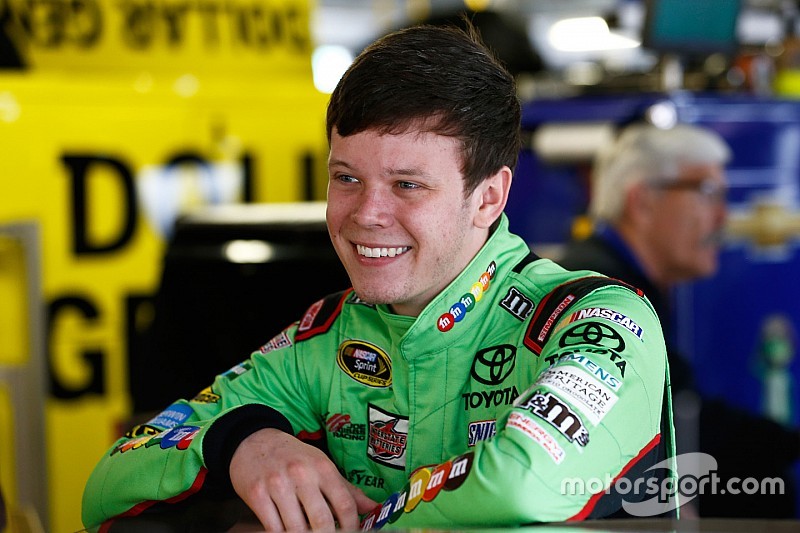 The 2015 Camping World Truck Series champion, who is currently fourth in the Xfinity Series standings after winning his third race of the season on Saturday night at Iowa Speedway, is expected to drive the No. 77 Toyota, Motorsport.com has learned.

Jones will be sponsored by 5-hour Energy, which will serve as the primary sponsor for 22 races, sources said. An official announcement came Sunday morning at Watkins Glen International.

"It's all come together in the last month. To find a driver like Erik and a sponsor like 5-Hour Energy, along with our technical agreement with Gibbs, we think we're going to be able to run where we need to run. We're very excited," said team owner Barney Visser during the official announcement

For Jones, this is a massive opportunity and he is very thankful. "I'm very excited, but anxious at the same time. Anxious for this day and excited to be here. It's pretty cool for me to partnered up with Furniture Row and 5-Hour. It's pretty cool for me, this early in my racing career. To see it all come together here has been a pretty cool experience. Definitely excited for next year."

A rapid rise to the top

Jones, 20, has enjoyed a meteoric rise in NASCAR racing. After he outran Kyle Busch to win the 2012 Snowball Derby, Busch hired the Byron, Mich., native to drive the No. 51 KBM Tundra the following season. Jones won at Phoenix Raceway in his fifth truck start.

The Toyota development driver added a victory at Iowa Speedway before turning 18. KBM then expanded Jones' schedule to include oval tracks over one-mile and three NXS starts. Jones didn’t disappoint. Despite the tougher fields, he finished every race in the top 10 with an average finish of seventh.

Last season was the first year Jones was eligible to run the full truck season, and he won the title with three wins, 11 top fives and 20 top 10s. Jones enjoyed a remarkable average qualifying effort of 4.6 bolstered by five poles in 23 starts. He led 925 of 3,437 laps raced and averaged a 6.3 finish.

En route to his truck title, Jones pulled double duty in 23 Xfinity races. He won in his first NXS race in his ninth career start. With three poles, Jones average a 4.9 starting position. His two wins, 13 top fives, 17 top 10s resulted in an average finish of 9.2.

Getting a taste of Cup

When Jones tested the Sprint Cup waters last year, filling in for Busch (broken leg, foot) and Matt Kenseth (suspension), he transferred to the final round of qualifying for all three races. Although he led a lap in his first start, Jones took a hard hit with just over 60 laps remaining in the race and finished 40th. Jones finished 12th in his second start — at Texas — and 19th at Phoenix.

This season, Jones’ concentration has been on the NXS title. His qualifying average of 2.1 (five poles) is by far the best on the tour. In 19 races, Jones has posted 11 top fives and 12 top 10s. He’s led laps (364) in 10 races and his 154 circuits at the point on Saturday were the most this season.

When asked about the possibility of adding a second team on Friday at WGI, team general manager Joe Garone said "It’s certainly a part of it for the growth of the team. It’s been over this journey we started off and Barney (Visser, team owner), his company has funded our car all along and are still there, but Bass Pro Shops really coming onboard this last year has really opened up a door for other sponsorships.

"And, it’s kind of settled us to where we feel we’re getting strong enough to support a second effort and it’s no secret we’ve been working on that and we’ll see where that takes us.”

Jones was coy when questioned about the news he would move to Cup by TV. "I've been waiting along here during the year to see what would come up. It would be exciting to get the opportunity, but I'm focused here today on getting this Xfinity car a good starting spot and trying to win another race for these guys tomorrow."

The addition of Jones is the next step in Furniture Row Racing’s evolution. The Denver-based organization was founded by racing enthusiast Barney Visser in 2005. The next three seasons, the organization attempted to run the full schedule but qualified for 19 events the first two years and 32 races in the No. 78 in 2008 with Joe Nemechek. The addition of Regan Smith in 2009 provided a youthful spark for the start-up team which continued to show progress despite scaling back to 20 races that year.

Visser returned to full-time competition in 2010. One year later, Smith carried the No. 78 car to Victory Lane in the 2011 Southern 500 by out-dueling Carl Edwards at Darlington Raceway. The following year, Kurt Busch took over driver duties for the final six races then led the team to its first Chase berth in 2013.

But Martin Truex Jr. has helped develop the team into a perennial Chase contender under the direction of crew chief Cole Pearn. With support from Toyota Racing Development, Truex and the No. 78 Furniture Row Racing have been frontrunners on a weekly basis.

The team has already started modifying the race shop to prepare for the second car and is actively seeking new personnel.

For Jones, who has met every challenge he’s faced in racing, FRR will provide the perfect next step.