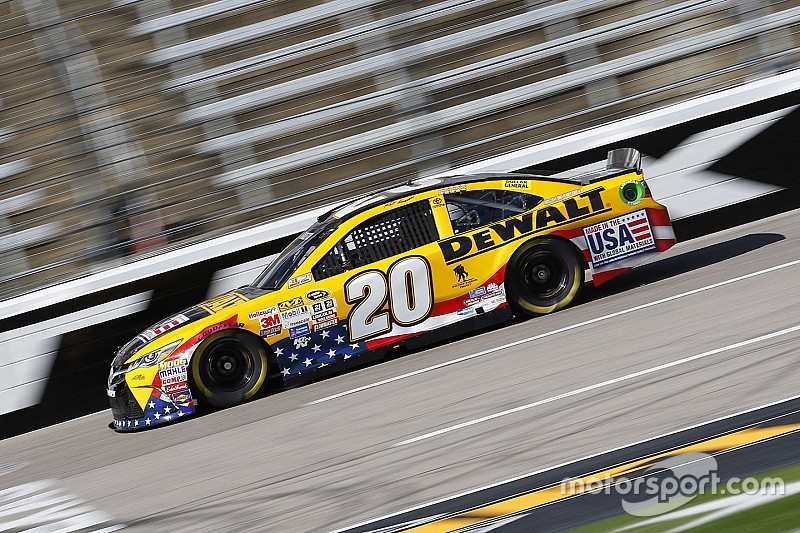 Erik Jones’ Sprint Cup Series career got off to an unexpected early start this season and it’s nowhere near done yet.

Jones began the 2015 season planning to run fulltime in the Camping World Truck Series for Kyle Busch Motorsports as well as competing in several Xfinity Series races for Joe Gibbs Racing, but not with any Cup series races planned.

That all changed for the 19-year-old native of Byron, Mich., when he was rushed into action in the spring race at Bristol (Tenn.) Motor Speedway to finish the race for driver Denny Hamlin, who was sidelined with neck spasms.

Jones then got his first official start in the series in May at Kansas Speedway, substituting for driver Kyle Busch, who missed most of the first part of the Cup season with a broken ankle and leg.

Jones began the past week focusing on trying to secure his first Truck series championship but was anointed the substitute driver for Matt Kenseth at Texas and Phoenix after Kenseth was suspended for two races by NASCAR.

His first weekend of NASCAR “triple duty” got off to a great start with a victory in Friday night’s Truck series race.

“We knew as soon as the penalty was announced that it was a possibility (to do the Cup races for Kenseth) before they went through the appeals process. Then when the appeals process was done, we knew we were going to be doing it,” Jones said.

“We’d done some things throughout the week to try to get prepared a little bit. Mainly, fitting in the No. 20 car and making sure everything was going to be somewhat close. I found out I guess for sure (Thursday) night when everything was all said and done.”

A win is not out of the question, but I think it’s definitely a little far-fetched in some ways

Although he hasn’t had much previous experience in the Cup car, Jones believes what he has one should serve him well.

“It’s only one (full) race, but there’s a lot that was learned just in that one day and getting figured out a little bit and seeing what they differences were between racing the Cup car compared to the Truck or the Xfinity Series,” he said.

A hard spot to fill

“Going into this weekend I didn’t know Jason (Ratcliff, Kenseth’s crew chief) that well, I’d only met him once. I really didn’t know anybody that worked on the No. 20 so I just had to kind of get to know people.

“When you kind of step into that position, it’s a hard spot for anybody to fill in for a driver and just try to get yourself acquainted with a team within a week or two weeks, it’s not the simplest thing to do.”

Jones got off to a slow start with the No. 20 in Friday’s Cup series practice session but had made big gains by its conclusion.

He continued his improvement by qualifying eighth-fastest during the three-round knockout session Friday evening.

As for expectations for Sunday’s race, Jones believes anything is possible.

“I never say it’s out of the question. Obviously, the No. 20 team has been really, really fast here the last month as well as the rest of Joe Gibbs Racing. I think we have a good shot here,” he said.

“A win is not out of the question, but I think it’s definitely a little far-fetched in some ways.”

'Weepers' bring NASCAR track action to a halt at Texas

Kenseth suspension in the back of all driver's minds at Texas