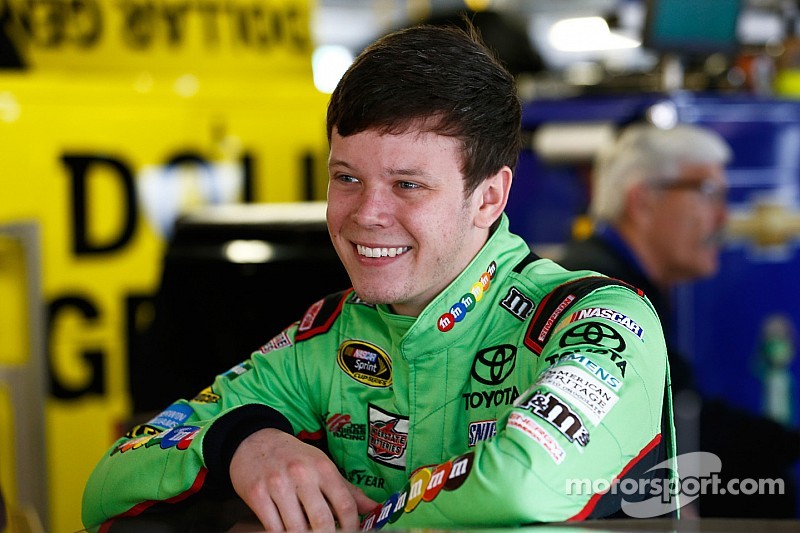 KANSAS CITY, KAN. — Erik Jones’ evening at Kansas Speedway did not work out the way he had hoped.

The 18-year-old Joe Gibbs Racing development driver, who is filling in for the injured Kyle Busch, patiently worked his way from 12th-place to sixth on Lap 196. But his Sprint Cup debut ended prematurely when Jimmie Johnson pulled up to the No. 18 M&Ms Toyota in Turn 4 and took the air off of the back rear spoiler.

“Sorry guys,” Jones radioed to the crew. “Just lost it…I’ll try to drive it back, but it’s killed.”

Jones sustained major damage to the right side of his Toyota.

Crew chief Chad Knaus who watched the incident unfold said, “I really hate that for him. He was doing a damn good job.”

Johnson, who had a front row seat for the rookie miscue, replied, “It snapped out from under him. Wow.”

Once Jones was in the garage, he remained apologetic.

"I learned a lot about racing up front and racing with these guys," Jones said. "It’s definitely nice to be as fast as we were and we had a great M&M’s Camry, but I just got loose off (turn) four and lost it.  All my fault, guess I have to go back and figure it out. You know, we had a good night before that. Something to take from it...it’s just a matter of trying to get a little better on my end and figuring out where the limit is. Unfortunately, we found it there and we’ll try to get a little better and see if we can get another shot in this thing.”

Jones returned to the track on Lap 219. He finished 40th.

Jimmie Johnson stays out, steals the victory at Kansas