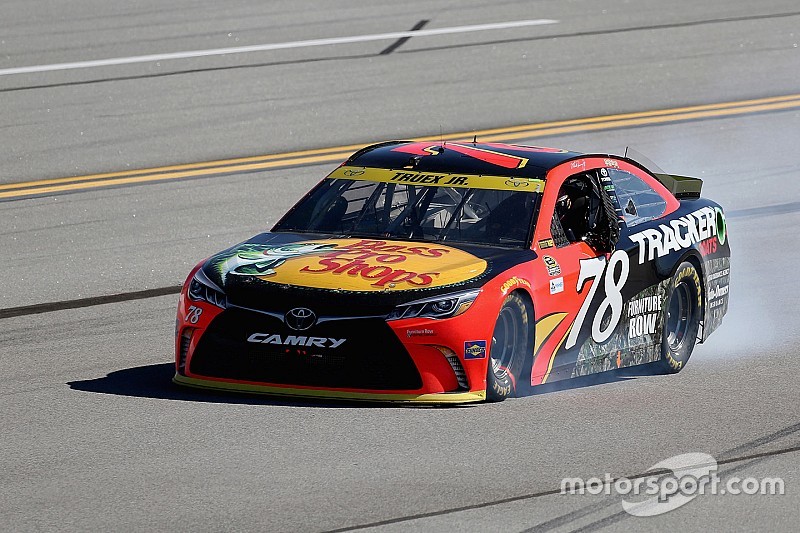 Martin Truex Jr., who at one point appeared to be a shoe-in to challenge for the Sprint Cup Series championship this season, was all-but eliminated from the Chase in the early laps of Sunday’s race at Talladega.

Shortly after a round of green-flag pit stops, smoke began pouring out of Truex’s No. 78 Furniture Row Racing Toyota and NASCAR threw a caution on Lap 42 of 188 when his engine blew. He finished last (40th).

Truex entered the Hellman’s 500 with a 13-point cushion over ninth place in the Chase standings. The Chase field will be cut from 12 to eight after the race and at the finish, he was on the outside looking in.

“I felt like we had a team that could compete for the championship and unfortunately we’re not going to be able to fulfil that,” Truex said in the garage. “There’s still a chance of miracle, but I don’t see it happening.

“We’ll just have to see how it all plays out today. I’m just disappointed but proud of my team for the effort. It’s been a really good season for us and we still got four more races we can go out there and win and we plan on doing that.”

Truex blew through the first round of the Chase, winning two of the first three races, but his trek through Round 2 has not been near as flawless.

He finished 13th at Charlotte and 11th last week at Kansas which left him in a very precarious position entering Sunday’s unpredictable race at Talladega.

“It’s part of life, part of racing. You take it one week at a time,” he said. “You enjoy the good days and try to get past the bad ones. That’s what you do no matter what where you’re at, you’re in the race car, or someone is struggling in your family.

“Definitely hurts but we’ll get through it. This sport is tough and we didn’t perform at Charlotte and Kansas like we’re capable. We had some issues that bit us there and put us in a hole. If we could have went there and done better and maybe had gotten a win, we wouldn’t be talking about this right now.”

On Saturday, NASCAR confiscated unapproved jack bolts from Truex’s No. 78 during pre-qualifying inspection. Although NASCAR said a points penalty was “unlikely,” officials could not rule it out.

However, if Truex ends up not making the Top 8 at the end of Sunday’s race, any penalty from that incident will turn out to be moot.

In Earnhardt's absence, Bowman has stepped up

Keselowski's Chase chances go up in smoke at Talladega: "We kept finding debris"