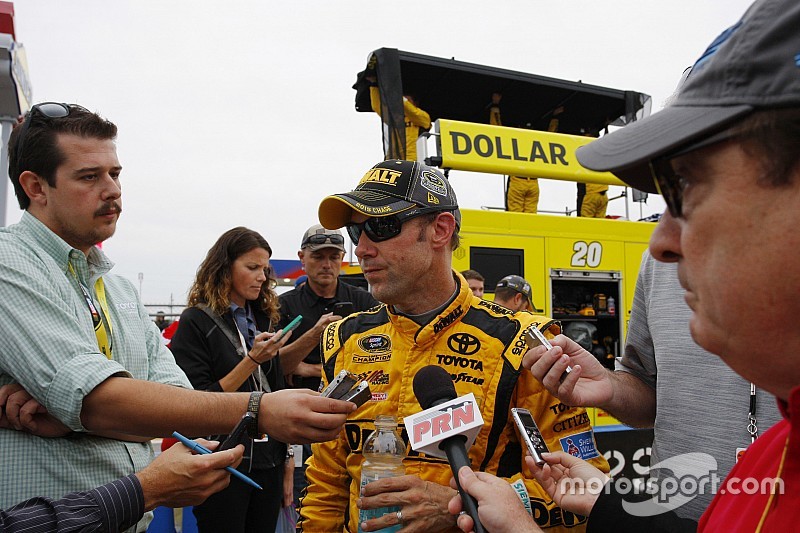 Together, drivers combining for nine wins this season ended up eliminated from the Chase from the Sprint Cup following Sunday’s CampingWorld.com 500 at Talladega (Ala.) Superspeedway.

Matt Kenseth (five wins) and Dale Earnhardt Jr. (two wins) were the most in danger coming into the race, both essentially needing to win to advance. Earnhardt had the best chance given his two previous wins this season at Talladega and Daytona.

I just feel like they (NASCAR) have lost total control of this whole thing. This is not what racing is all about.

Earnhardt finished second when the race ended under caution during the two-lap overtime. Kenseth ended up 26th. Jr. tried to remain positive after the near-victory and his post-race reaction can be seen HERE.

Denny Hamlin (two wins), who came into the final race with an 18-point lead over the cutoff, turned out to be the most surprising omission from the next round.

Hamlin experienced a bizarre problem in the race when the driver escape hatch built into the roof of his car repeatedly came loose on the track. He was forced to make multiple pit stops – some under the green-flag – to try to prevent the hatch from getting loose.

Eventually, Hamlin fell two laps down and was caught up in the wreck on the final restart. He ended up credited with a 37th place finish.

Ryan Newman finished 12th in the race and three points in the series standings behind Kyle Busch who claimed the eighth and final transfer spot. When asked about the final restart by Fox, Newman replied “Which one? The final, final restart or the one where we were only going to have one and not anymore? And then the No. 4 (Kevin Harvick) causing the crash. Which one do you want me to talk about?”

“I got wrecked out two weeks in a row from people doing what they had to do to make the Chase, but call it what you want,” Kenseth said, who claimed there were "games" being played at the end of the race. “I just feel like they (NASCAR) have lost total control of this whole thing.

"This is not what racing is all about."

Hamlin, Kenseth and Newman suggested after the race that Kevin Harvick – who started the final wreck when he fell off the pace with engine issues – may have tried to bring out a caution on purpose to retain his position in the Chase standings.

After the race, NASCAR Vice Chairman Mike Helton said the sanctioning body had determined Harvick had done nothing wrong.

That didn’t seem to satisfy those who failed to advance.

Harvick “could only run about 30 miles per hour so I think he saw people coming and he knew he was going to be 30th, last car on the lead so (he) caused the wreck,” Hamlin said. “That’s neither here nor there.

“We had a self-inflicted day, took us four times to get our roof fixed. It’s unfortunate, I feel like I’ve done all I could possibly do to advance in a three-race season.”