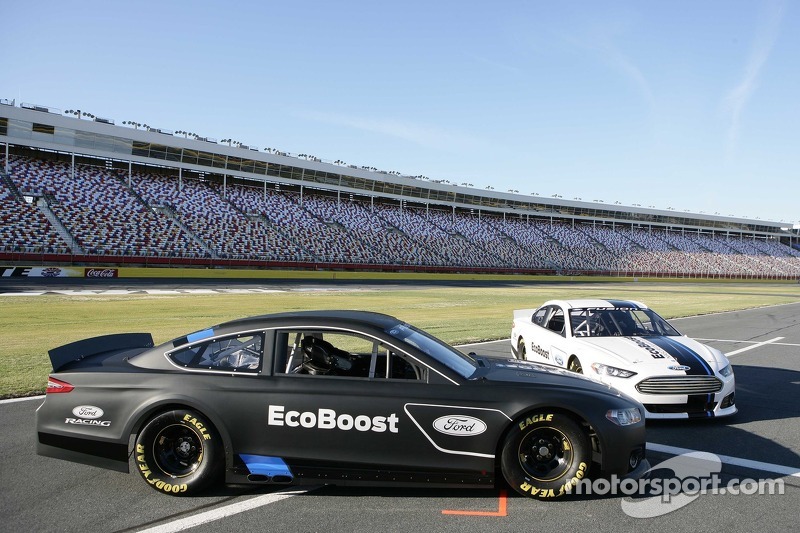 Carl Edwards, driver of the No. 99 Fastenal Ford Fusion, took part in the test session at Martinsville Speedway today with the recently-approved 2013 NASCAR Fusion. Edwards stopped by the infield media center during the lunch hour to answer questions from the media. 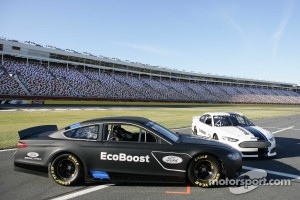 “I’m just glad to be here and getting some laps at Martinsville. It’s a track that’s been really, really difficult for me personally and our Roush Fenway team for a couple of years now, so it’s really good for me. It’s nice to get a little extra time to work with Chad and Donnie Wingo and go through some things we’ve always wanted to try here. I guess Goodyear is gonna work with us a little bit more this afternoon and tomorrow. I still haven’t eaten one of those hot dogs yet. I know you’re trying to get me to do that, but I’m trying to get fast without doing that. I like this place. It’s fun to drive. I just want to get faster.”

WHAT KIND OF URGENCY DO YOU GUYS HAVE RIGHT NOW? “We are going to every race with one purpose and that is to win that particular race. We watched last weekend. I got a front row seat to watch Jeff Gordon pull it off and do what needed to be done and that’s a motivator right there, to know that we can do this, it can be done, we just have to go out and race these next five races like they’re the most important races in the world -- each one of them. I think we made a step towards that last weekend with a fast race car and being a little more aggressive. That last restart, it was frustrating we weren’t able to get up there like the 24 guys did and Jeff did. Hopefully, we can just go out here and have some fun and win a race or two. It would be a huge comeback for us and it would mean a lot.”

WILL TAKING 100 POUNDS OUT OF THE CAR MAKE A DIFFERENCE? “That’s good. I don’t know if I have this figured out or not, but my theory is -- and I think a lot of guys agree -- is that we have a very small box that NASCAR has put us in. We have heavy race cars that make a ton of downforce – almost a literal ton of downforce -- and a relatively small tire, so Goodyear is put in a very small box where the tires have to make grip, but they can’t make so much grip and make so much heat that they come apart like they were at Michigan, so something has to give. You either have to make the tires wider and have a bigger contact patch, or the cars have to be lighter, or they have to have less downforce. I think NASCAR recognizes this. They’ve taken the side skirts away and taken a little weight away from the cars and hopefully that will let Goodyear make softer Goodyear tires that fall off more. I know that’s a lot of stuff there, but, basically, I’m all for less downforce, tires that fall off, and I really don’t care how heavy the cars are as long as we’re able to race them and the fast cars are able to move through the field. I think that’s a key and I think NASCAR is working really hard. I don’t know how much 100 pounds will make a difference. I don’t know that I really know there is 100 pounds missing out of the car.”

CAN YOU TALK ABOUT THE WEATHER SITUATION ON SUNDAY AND IF THERE’S ANYTHING MORE THAT CAN BE DONE? WOULD DRIVERS BE IN FAVOR OF STOPPING THE RACE AND THEN RESTARTING IT AFTER THE WEATHER CLEARED? “I spoke with one of the gentlemen in the hospital up there yesterday that was struck by lightning and he told me the story in detail about what happened to him and his friends and it sounded like a very terrible scene. I’ve read a little bit about it and I know there’s a lot of discussion about what NASCAR should have done or the track should have done, but, I think, at the end of the day, it’s Mother Nature and it’s very difficult for anyone to take responsibility and say, ‘We should have done this or done that.’ It’s something that I would have never expected. I walked right out from my hauler to my motorhome in the middle of that rainstorm and I ignorantly didn’t think about the dangers that were there. I think we all maybe take that stuff a little too lightly. I have to tell you that after talking to that gentleman last night, Tony, my thoughts and prayers are with him and his really good friend who is pretty bad off. He’s recovering and the family that lost their father, it’s tragic. I think all of us would be willing to do anything we could do to prevent something like that from happening in the future. At the end of the day, this is sports. It’s supposed to be fun. Everybody is going out there to have a good time and we need to do things the safest way possible. Tony is a really nice guy. To hear what happened at the track is pretty bad.”

DID YOU TALK TO HIM ON THE PHONE? “Yeah, I talked to him on the phone. He’s a big 99 fan and the folks at Pocono got me in touch with him. The gentleman that lost his life, that’s just really sad. I believe the way he told the story there were three guys that were injured. Tony, the guy I talked to was injured the least. His one buddy is pretty bad off and his other friend obviously lost his life. From what he told me, I don’t want to speak for him or anything, but it was as big of a surprise to him that something like that happened. They didn’t expect that and I don’t think they saw anything coming. They didn’t think there were at that big of a risk. It’s just tragic.”

SHOULD THERE BE MORE COLLABORATION ON SOMETHING LIKE THAT BETWEEN THE TRACK AND NASCAR? “I don’t want this to come across harsh or anything because I have a huge amount of sympathy for what happened, but at the end of the day every person is responsible for themselves. Now, it is NASCAR and our jobs – if we can, anyone with the technology at the track or NASCAR – if we can advise someone and give them information it’s your moral obligation to do that. But I think at the end of the day it’s a good wake-up call for all of us, whether we’re at a race track or walking out of the shopping center to our cars that they issue storm warnings for a reason. I know myself personally I’ve taken that stuff pretty lightly, even growing up in Missouri with all the severe weather we don’t really think it’s gonna happen to us. But I think at the end of the day it’s each person’s individual responsibility.”

IS THERE ANTICIPATION OR EAGERNESS WITH THIS NEW 2013 CAR? “I’m anticipating the new car. I know walking in the garage and looking at my Ford it looks neat, it looks like a neat race car and that’s part of why I got into racing. I like cars. I like going fast. I like the competition and I really like good-looking race cars. I think it looks a lot better. From a competitive side, it can only be good for us. I feel our team responds really well to changes. With the COT we had a lot of success when it first came on the scene, so I think anything different is good. I think Ford has worked really well with our team so that our car is as good as it can possibly be and I think it’s gonna be really neat. I think the fans are gonna like it a lot, too.”

ANY CONCERN ABOUT LOSING SOMETHING? “No, I’m not concerned about losing anything in the transition. I think the more change on a technical side, if they changed things every week, that would suit me very well. I really like change. I like going to a new track. I like having aerodynamic changes and tire changes – those things are a lot of fun because it’s like everyone is going to a new event and it’s who can figure it out the quickest and that’s something I’ve always enjoyed.”

HOW FRUSTRATING HAS THIS SEASON BEEN? “The season has been very frustrating, but the good thing is that we know how fast we can be. We know how good we are. Last season, we performed in that Chase almost flawlessly. We made the very most of everything we could get. We didn’t go out and win any races in the Chase, but we didn’t make any mistakes. I felt we made the absolute most of what we had. Knowing that and knowing that we can do that gives me a lot of hope. If we can just win a race and make this Chase, I feel like we can be as good as anyone. Coming here today it’s pretty cool to see those folks out there. There are folks with 99 shirts and necklaces and hats. They’re behind us and I think if we can come through for all of our fans and sponsors it would be a huge feeling of accomplishment.”

DOES IT ADD TO THE PRESSURE? “I think most of the pressure for me comes from within, so I don’t think anyone could add any pressure to me. I get a lot of pressure that I put on myself every day.”

THOUGHTS ON PENSKE RUNNING ROUSH YATES ENGINES AND DODGE REPORTEDLY LEAVING NASCAR FOR NEXT SEASON? “That’s good. The hope is that Penske and Doug Yates can work together and we can have a net positive and our engines can be better. Anytime you bring new people in and you have people working and sharing ideas you have the opportunity for that, so that’s huge. The engine thing could be great for us. When they first announced Penske coming to Ford that’s the first thing a lot of us thought about was, ‘Hey, maybe we can work with their engine shop.’ As far as Dodge is concerned, I think they’re making an announcement here in a little while, but at the end of the day every company, corporation, or person has to do what’s best for them. If they decide this is what’s best for their company right now, then I think that’s what they need to do. I have a feeling that they’ll be back. There’s a reason so many people market in NASCAR and so many manufacturers are a part of it because it’s a great way to sell products to people and get the message out to people in a really fun and exciting way. So, hopefully, they’ll be back soon but I wish them all the best in their business and hope whatever they’re working on works out.”

Kenseth searching for road-course victory at The Glen