Edwards: "People don’t have to understand it if they don’t want to" 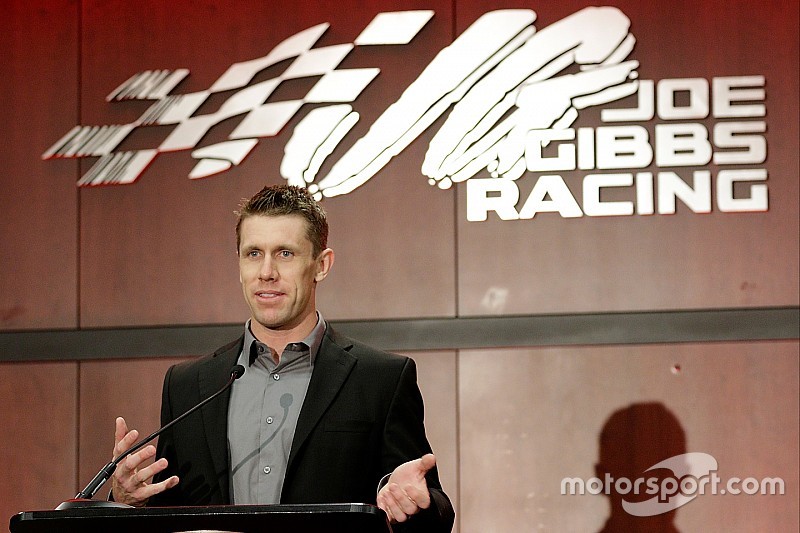 It’s still taking some adjustment for Carl Edwards to see what used to be his No. 19 Joe Gibbs Racing Toyota racing around the track without him in the driver’s seat.

But for the most part, Edwards said he is enjoying his time after electing to step away from full-time NASCAR competition.

Edwards, at the request of crew chief Dave Rodgers, is at Phoenix International Raceway this week offering any assistance he can to his replacement in the No. 19, Daniel Suarez. Suarez, the reigning Xfinity Series champion, took his first laps in a Monster Energy NASCAR Cup Series car this morning as part of the two-day test.

“It’s been kind of neat so far to watch and talk to Daniel a little bit. It’s a little bit surreal to watch that car go around those first couple of laps. It struck me about how big a moment it is for Daniel,” Edwards said Tuesday.

“He’s doing fine. All they are doing now is working on some very basic stuff, working on pit road speeds, getting familiar with all the switches and things in there. We talked before he went out. The expectations are just for him to go out there and learn.”

Transition from driver to mentor

In Edwards’ announcement earlier this month, JGR officials mentioned the possibility Edwards could serve in a mentoring role for Suarez this season as he transitions to the Cup series.

Asked how he felt about returning to the track once the test dates arrived, Edwards said, “At first I was really looking forward to it, but then as the day finally approached I thought, ‘What am I going to do there?’ It all feels a little strange.

“The first couple of minutes being around felt a little funny, but it’s been fun.”

Edwards said he hasn’t paid too much attention to the opinions offered by fellow competitors and fans about his decision not to race this season but after listening to comments on talk radio last week, he said it made him think he didn’t explain himself very well.

“If people don’t understand, that’s just the way it is,” he said. “I thought I explained it pretty clearly. But people have to have something to talk about.

“I’m hoping to get to be able to help with some testing stuff with TRD (Toyota Racing Development) and things like that. Maybe those things will happen, but right now I’m trying to get used to a new normal – something a little different.

“It’s a unique decision and people don’t have to understand it if they don’t want to.”

Edwards said he has been very appreciative of the support from most of his fans and said he wrote a letter to one of his long-time fans just last evening.

“I guess I didn’t expect that, people are really cool about it and that means a lot to me,” Edwards said.

Asked if his work with Suarez would continue throughout his rookie season, Edwards said he wasn’t sure.

“The biggest thing is I want to help as much as they want me to. I don’t want to be the guy hanging around and they feel like they have to let me hang around,” he said. “Dave is my friend and I like Daniel a lot and if I can help them, I’ll help them.

“It’s so much different standing on the truck watching the car go, then being in the car. I guess you just have more time thinking about all things that can go wrong up there. It’s a different kind of stress – more stressful for me.”

No excuses: Five NASCAR drivers who need to win now