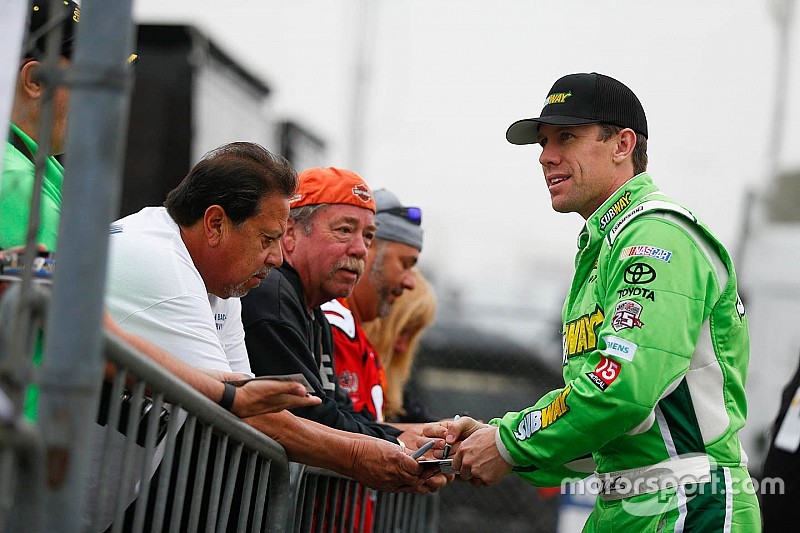 Can Carl Edwards return to Victory Lane on Sunday at Auto Club Speedway?

On Saturday, Edwards posted the fastest lap in second practice showing dramatic improvement over his 25th fastest single-lap run on Friday. Edwards completed 21 laps but his best circuit was 187.906 mph in the morning session.

It was clear that the Dave Rogers-led team picked up the pace significantly in qualifying finishing fifth in the final round.

“The key is we got it better and better and that’s what people do,” Edwards said. “It’s hard to make the cars do what you want, but Dave Rogers (crew chief), he has an amazing ability to make things happen.”

Edwards’ average finish of 8.8 at Auto Club Speedway is second only to five-time Fontana winner — and local favorite — Jimmie Johnson.

"We've been looking forward to this race track," Johnson said. "The tires fall off a bunch here with multiple grooves. The new package should provide some good racing. You saw it last week that we were able to pass cars, we were able to get close, tires meant something and that’s what’s fun. This place should be a pretty good race.”

Despite running 10th, Earnhardt wasn’t comfortable with the feel of the No. 88 Chevy.

"It's hard to compete with the ride quality we've had today," said Earnhardt, who lacked grip during his final run. "The shocks feel like they're tied down, it makes the ride feel wild.”

Just 12 minutes into second practice, Aric Almirola hit the wall in Turn 2 after completing his third lap. Although the car had slight right side damage, the team elected to make repairs so Almirola could return in his primary car for Happy Hour.

Kurt Busch wasn’t so lucky. He tagged the wall 36 minutes into practice and crew chief Tony Gibson decided to pull out the back up car. Busch, who posted the 15th-fastest time (185.052 mph) in second practice struggled to find speed out of the gate. In first practice, last year’s polesitter who led the most laps (65) here last year before finishing third, was 28th quick on the sheet and missed transferring out of the first round of qualifying by two positions.