Drivers get up to speed with NASCAR's at-track safety teams 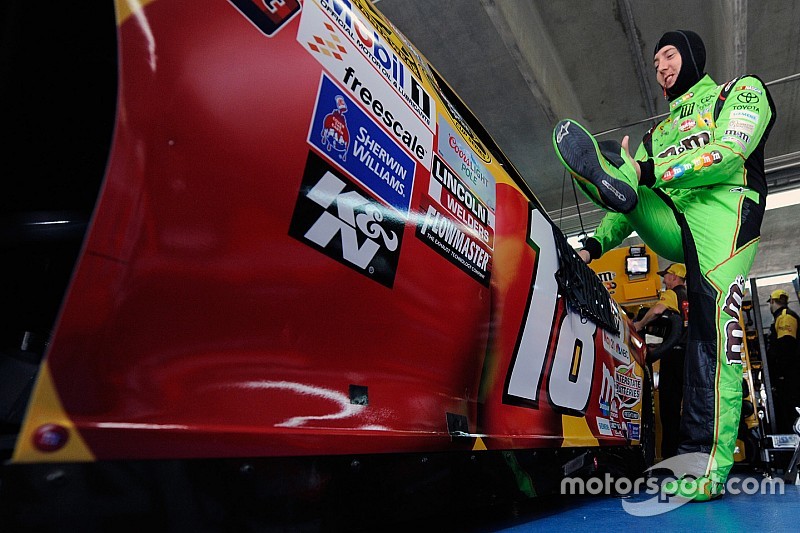 Competitors appreciate NASCAR's safety initiative but believe there is always room for improvement.

CONCORD, N.C. — It’s been three months since Kyle Busch, one of NASCAR’s top stars, was carried by stretcher into an ambulance and rushed to Halifax Health Medical Center after breaking his right leg and left foot in a horrific accident during the Feb. 21 XFINITY Series race at Daytona International Speedway.

On Thursday, Busch arrived in the media center at Charlotte Motor Speedway on a motorized cooler/scooter, looking no worse for wear.

Still euphoric from the life-changing experience of first-time fatherhood three days earlier, the driver of the No. 18 Skittles Toyota was doing an admirable job of masking any remaining ill effects of his February crash, if he was feeling any at all.

Busch’s return to competition in the Sprint All-Star Race was an unqualified success. With protege Erik Jones standing by as a relief driver--an unnecessary precaution, as it turned out--Busch started 19th and finished sixth. Jones again stood by on Sunday, but Busch finished all 600 miles of the Coca-Cola 600 looking surprisingly fresh when he exited the car after a strong 11th-place run.

In NASCAR’s marathon race, Busch’s greatest concern with climbing back into the No. 18 M&Ms Toyota was obvious.

How hard of a lick can I take and still walk away?

“Certainly, taking another hard hit,” Busch said. “That definitely is in the back of your mind. How hard of a hit can you withstand and not get hurt again? That’s obviously there. That’s something that we live with each and every day, even before I got hurt – how hard of a lick can I take and still walk away, and I think we found that out finally.

“Every man is breakable. There’s obviously a risk factor that we take, but you pray to the good Lord that he keeps you safe and you go do your job.”

Get with the program

The week after Busch’s accident, several drivers, including current Sprint Cup champion Kevin Harvick, assembled to educate themselves on NASCAR’s safety procedures. Once Harvick understood NASCAR’s course of action in emergency situations, he was more comfortable with the program.

Once they explained the process, and how the doctors were chosen was definitely kind of eye-opening as to how much money and time was spent to make sure they had the right people at every race track.

“Learning more about the process and how long some of these doctors in the background that have actually been at some of these race tracks for a really long time and know the system and how it’s talked about and upgraded and done differently on a yearly basis, was really something that I didn’t know about,” Harvick said. “But it is definitely something we’ve talked about and had these conversations with NASCAR.

“Once they explained the process, and how the doctors were chosen was definitely kind of eye-opening as to how much money and time was spent to make sure they had the right people at every race track, and, really, the longevity of the staff and some of the people that have been a part of our community for a long time.

“Some of it is just now knowing about it. And I don’t think anybody is saying that it can’t always be better. But I feel pretty confident in what the process is and the medical staff that we have at the tracks.”

Up to the challenge

With the rash of incidents that occurred leading up to the Indianapolis 500, the safety crews that protect the drivers, crews and sometimes spectators have been thrust into the spotlight — as has the debate as to whether NASCAR needs a traveling safety team similar to that moves from race to race in IndyCar.

IndyCar’s Holmatro Safety Team was credited with saving James Hinchcliffe’s life last Monday when he crashed into Turn 3 at the Indianapolis Motor Speedway. A suspension piece punctured his thigh and severed an artery. IndyCar timing and scoring had Hinchcliffe running 228 mph prior to the wreck. Later reports listed the impact of the crash at 125 Gs.

"Words can't describe how thankful I am to the Holmatro Safety Team," Hinchcliffe said in an IndyCar release. "Those guys, in addition to the doctors and staff at the (IU Health Methodist Hospital), are my heroes.”

"His condition was critical upon his arrival and I think the IndyCar system as a whole needs to be commended for how well they can take care of drivers in this situation,” Polman added.

According to IndyCar, the Holmatro Safety Team consists of approximately 30 safety personnel with a minimum of 18 attending each event – a trauma physician, an orthopedic physician, 2 paramedics, 12 firefighters/EMTs and 2 registered nurses. Team personnel have an average of 20 years of experience in their respective areas. They travel with four safety vehicles.

“About 75 percent of our team is comprised of civil servants who are officers in their departments, such as captains, lieutenants and a fire chief, which means they have vast amounts of experience managing people and managing ground scenes and incident command,” said Mike Yates, IndyCar’s manager of track safety operations. “Many have bachelor’s degrees in fire science, and we also have people who have gone beyond the scope of their local fire departments by being involved with disaster task force teams.”

The Holmatro Safety Team coordinates the safety personnel staffing each track, including firefighters, ambulance and tow-truck operators and track maintenance crews. An eight-hour instructional course is held at every new venue on the schedule and the team meets with tracks for update sessions before each event.

Yes, NASCAR does do it differently…

NASCAR doesn’t have a traveling team in the same sense as IndyCar. Its Track Services Team — which includes medical liaison coordinators, emergency services coordinators and track services coordinators — attend every venue to oversee the event. The planning — and precautions taken by these individuals — is a year-long commitment which starts long before cars are on the track and is custom-tailored, using the best current safety practices for stock car racing.

NASCAR’s “scene commanders” bring decades of first responder experience as former fire fighters. Their efforts are bolstered by a “99” or on-scene board-certified emergency room physician familiar with local hospitals and procedures. Even if NASCAR had a full-time staff physician, he/she might not be licensed by the state that’s hosting that weekend’s race.

Prior to each season, NASCAR holds an annual Safety Summit for medical, safety, security, and track services professionals, encouraging participants to share best practices and take part in workshops, seminars, and demonstrations to familiarize themselves with and advance practices specific to motorsports emergencies. Throughout the season, NASCAR is dedicated to implementing new standards and to offerinng training online and at the facilities to local first responders, including firefighters, EMTs, and emergency room physicians and nurses prior to the race.

“NASCAR’s commitment to advancing safety across all areas of the sport is a constant and we view our system as a leader in motorsports worldwide,” said Jim Cassidy, NASCAR Senior Vice President, Racing Operations.

“Our internal team, always advancing the mission, is engaged year round with best-in-class medical experts and safety personnel who provide the highest-quality service to our competitors at the very best medical facilities in proximity to our events.”

Four-time Sprint Cup champion Jeff Gordon, who started his career in open wheel but has spent the last half of his life driving stock cars understands why IndyCar’s emergency staff differs from NASCAR.

“You know they have that staff for a reason,” Gordon said. “Those cars have shown they can be very dangerous. I mean they are open-wheel cars doing 230 mph around Indianapolis. I give those drivers and those teams a tremendous amount of credit for what they do.

“It’s a very appealing thing to watch as a spectator, but I tell you what, if they hadn’t had the safety crew that they had, we might have been talking about something different right now. For that I’m very thankful that they have that crew.”

Whether or not NASCAR needs a full-time physician on its staff, Gordon said the subject has been debated but “there are mixed opinions on it.”

We just want the best and I think it’s NASCAR’s job to always pursue that.

“I would like to see something like that,” Gordon said. “NASCAR has some pretty good reasons why they don’t do that. Having local emergency staff here knowing the facilities I think there is a lot to be said about that too.

“I think that there is no doubt that possibly saved his life and he (James Hinchcliffe) would probably say that. We are dealing with a little bit different stuff here. But after what happened with Kyle (Busch) anything can happen. You have to be ready for anything. We just want the best and I think it’s NASCAR’s job to always pursue that.”

Part of Gordon’s legacy will be discovering unprotected concrete track walls that subsequently have been covered by safety barriers.

Busch’s wreck at Daytona provided a similar catalyst where NASCAR performed a review on its existing tracks. Harvick is encouraged be those developments.

“I know that there is a really big plan in place and you just can’t go out and just put walls up,” Harvick said. “I think the planning and the organization and everything has gone through has been a full court press since that day.”

In his first interview with the media last month, Busch expressed gratitude to the first responders and medical staff that attended to him at Daytona and once he returned home to Charlotte.

After Sunday’s race, Busch was complimentary of NASCAR’s safety teams, its effort to educate emergency support personnel and the orchestration that occurs following an accident. However, Busch reiterated what many of his peers said, that additional medical support would be welcomed.

“I however do agree more probably with IndyCar that they have a specific team that goes each and every week, but you know, we do still have our NASCAR liaisons, the nurses that go every week and come to the racetrack, so they're always up to speed with our medications and the things that we're doing and taking and making sure that they're always there and helping with protocol within the care center,” Busch said.

“Again, you know, there's kind of a double‑edged sword to each of those things, and having the correct doctors in the care center is always a good thing, too, having some smart people in there, that's very appreciative.

”In his specific case, Busch said NASCAR’s staff “was awesome what they did.”

“Obviously, it helped me a ton to be able to get out of that race car in Daytona and to tell them what was going on and to get me in the ambulance on a stretcher and off to the hospital in order to get fixed up,” Busch said.

“I can't say enough throughout the whole process that everybody did, from the time of hitting that wall to taking the checkered flag tonight.”

How do NASCAR's best Sprint Cup racers stack up?