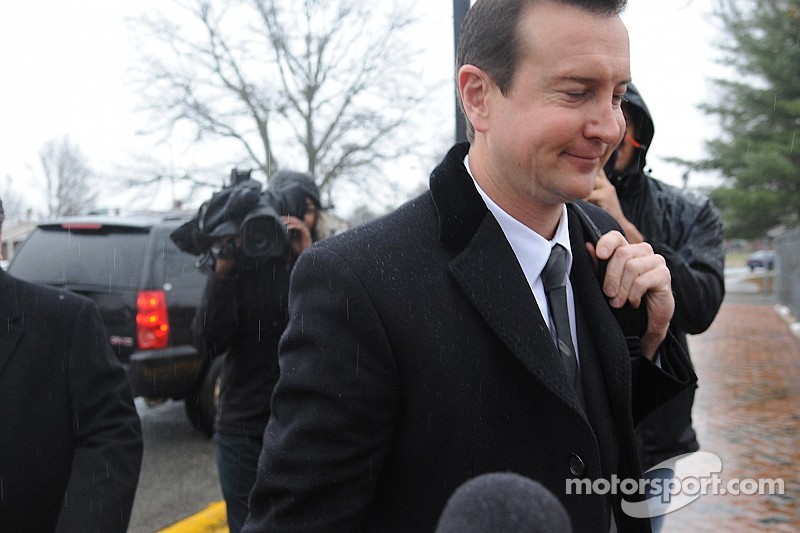 There is also a slight discrepancy in Driscoll's testimony.

If Patricia Driscoll, the now ex-girlfriend of 2004 NASCAR Sprint Cup Series Champion, Kurt Busch, was assaulted inside his motor coach on September 26 – as she alleged in a police report and in her attempt to secure a protective order against him – the people she immediately ran to for help did not see any injuries, redness or marks on her body, according to testimony Monday, in a Kent County Family Court proceeding.

The hearing, which began in December and has been carried over for further testimony, involves allegations by Driscoll that she pushed Busch away and ran to safety after he grabbed her around the throat and “slammed” her three times against the bedroom wall. That safety, according to her previous testimony, came from Nick Terry, a pastor with Motor Racing Outreach ministries – a person she claimed witnessed her alleged injuries.

However, during direct examination of Terry by Busch’s defense attorney, Rusty Hardin, of Houston, it was revealed there appeared to be an issue with Driscoll’s story. He came forward Monday after being given a partial transcript of Driscoll’s testimony by Hardin’s law firm where she claimed he was a witness to her injuries. He said he does not pick sides and had “respectfully declined” to testify previously but after reading what Driscoll had said during her testimony, he wanted to come forward so the judge in the case would have the facts and, “could make a fair decision.” He also told the judge no one had bribed him or paid him to be there as was alleged, according to testimony.

She’s a badass. I know she could take me down at any moment ... It was exciting. I had never met a mercenary before. She showed me photos of dead people shot in the head sitting in a Suburban.

“I am absolutely certain that I did not see anything,” said Terry, who described the situation as it played out around 10 p.m., when he was with his family in the motor coach lot at Dover International Speedway and heard a knock on the door. “Patricia and (her son) were there. She was crying and upset … I immediately asked if she was okay. Since my wife was there, I invited them inside. She sat down at the table and we moved the kids to the back.

“She told us that Kurt grabbed her by the neck and pushed her back up against the wall and that her neck hurt. She asked my wife and if we saw any marks or scratches. I didn’t see anything, any redness or anything. My wife had already stated that she didn’t see anything.”

Terry testified Driscoll didn’t say much after he and his wife failed to acknowledge seeing her alleged injuries but they did give her a bag of frozen vegetables from the freezer and an ibuprofen. He said she applied the frozen vegetables to the back of her neck and that he and his wife advised her to either get a hotel or return to her home in Ellicott City, Md. It wasn’t until six weeks later when Driscoll reported the alleged domestic abuse to law enforcement, according to the Dover Police Department.

The couple was supposed to spend the week between the New Hampshire race and the Dover race together in New England but Busch made the decision he was ending things because she was taking his focus away from racing. He said he left the track and rather than go to Rhode Island he went to Boston Logan Airport, parked his rental car in the middle of the “Y” between the departure terminal and the rental car return lanes, got out and went to get his bag from the trunk. When he did, he said, “she jumped like a ninja" from the passenger’s seat to the driver’s seat and left with all of his clothes and his iPad.

“I had the clothes on my back, my wallet and my cell phone,” he said. “I was just standing there in disbelief, astonishment that she was driving off. I stood there for a second. I texted her ‘I knew you would pull a stunt, bye forever.’ Then I went into the terminal, sat in the airport bar and had a beer trying to develop a plan.”

The following week is when she showed up unannounced with her son in tow and let herself into his motor coach using the code she learned while they were dating. He said he was asleep and had to wrap a sheet around himself because he was nude and she wanted him to tell her son their relationship was over. He testified that he told her that he would do it during NASCAR’s off-season and that she needed to leave. When she wouldn’t leave after multiple requests is when he sad, he cupped face between his hands, looked her in the eyes and “told her you have to leave.”

While on the stand, Hardin asked Busch about his relationship with Driscoll and he candidly admitted that if there really had been a true altercation between himself and Driscoll on September 26, he would have been on the losing end.

Busch testified that he believes Driscoll is a trained assassin and an operative for the U.S. Government. He said he has shown him photos on her cell phone of people she claimed to have killed that had been shot in the head. On the night the two first met, Busch already knew that Driscoll ran the Armed Forces Foundation charity but he also learned that she “had a defense company and worked for the government in different capacities.”

“It was exciting,” Busch said. “I had never met a mercenary before. She showed me photos of dead people shot in the head sitting in a Suburban. She said she was a sniper and responsible for the head shots at a really far distance and had different identities that she used.”

Busch said there was a public side to Driscoll’s life and her defense company, which specializes in ground sensor technology that can differentiate between an animal, a vehicle and a human, all while sending that information to intelligence gatherers fighting human trafficking and drug smuggling along the Texas-Mexico border.

And then there was a secret side, which he got a glimpse of during a behind-the-scenes red carpet tour of the Fort Bragg military base. That base houses the military’s special operations forces.

“It’s a tough subject to bring up,” he said. “I respect the capacity she works in, to kill people. I was led to believe early on it was long range then it turned into more of close combat kills.”

Busch said Driscoll told him that her goal was to generate an income with her defense company but she “worked side jobs killing people in Africa and Mexico.”

He also said she had a scar above her belly button because “she was stabbed in one of her missions.” He told the court that during their relationship, Driscoll would leave and upon her return she would have bruises, abrasions and other injuries that she claimed were because, “the mission went off course and she had to divert.”

“She had bumps and bruises and I would see them on her lower and upper body,” Busch recalled. “She had a bruise on her face from close combat, she said.”

From certain news reports on CNN to characters in movies, Busch said, Driscoll would indicate they were in relation to her work for the government. That included, Zero Dark Thirty, which Busch said she claimed was a compilation of different women, working undercover in covert intelligence industry.

Despite several people telling him that she was lying, Busch said, he still believes her – even now.

“I didn’t believe it because of what I have seen and what I have heard. She was a trained killer with her own defense company and ran the Armed Forces Foundation,” Busch said, resolutely.

She was a 'cancer'

Busch also said that before he found out that Driscoll had filed criminal charges, he began hearing rumors around the track about the alleged incident between the two. He said that team members and other were privy to information that only she knew. He also said that after she made her complaint, someone in team management made a seven-hour drive to the track and was seen talking to a Tier 3 driver. He testified that because 2015 is a lame duck year in his contract he has to race his way into a ride in 2016 and that she was a “cancer.”

For most of the day, Driscoll sat with her hands clasped together, as if in prayer, holding a pearl Rosary; however, during Busch testimony she sat back more in her chair and touched each of the tips of her finger together and shook her head at some of his answers.

Burett is now a business partner with Busch but she knew Driscoll several years before she ever met him. During her questioning by Hardin, she confirmed stories that Driscoll had told her about her life as a government agent.

When asked by Hardin if Driscoll had ever told her she worked undercover and killed drug lords as a government assassin, Burett said, “Yes, she said she was some sort of operative with the CIA and worked with the military.”

Cloutier testified that she worked with Busch since 2000 and never knew him to be violent towards people, although he had broken a few mirrors off of rental cars and was known to vent loudly, at times. She also admitted that Busch would occasionally become intoxicated and on cross examination confirmed that Busch called her one night because he was drunk and she picked him up and let him sleep on her couch. She also described Driscoll as someone obsessed with control and pointed out how she had taken over Busch’s schedule, marketing and appearances – many of which were for her Armed Forces Foundation charity.

Cloutier also said the thought that Busch is being accused of domestic violence is especially sensitive for her because she had been in an abusive relationship and she waited too long to leave. She didn’t report it and rather “picked out a spot on the map” and relocated to begin a new life.

“I don’t believe Kurt would physically abuse her,” Cloutier said. “Me, personally, I don’t believe anything she says. Every time she says something it’s not true.”

The case will resume Tuesday morning at 9 a.m. in the family court with Busch expected to be cross examined by Driscoll’s attorney. Following his testimony, Driscoll’s second ex-husband, Geoffrey Hermanstorfer, will take the stand. The two are in a bitter and lengthy custody dispute. Witnesses testifying on Driscoll’s behalf are supposed to take the stand Tuesday afternoon.