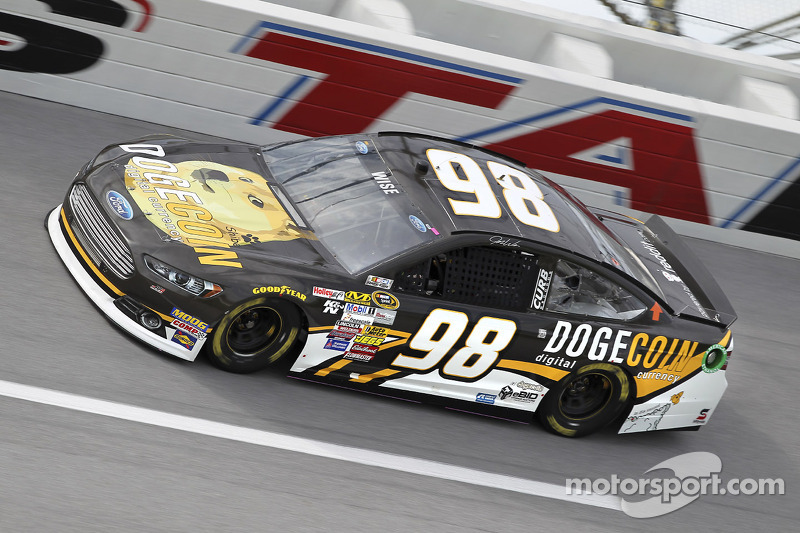 With fan voting for the 2014 NASCAR Sprint Cup All-Star Race nearing the end, a list including the names of the ten drivers with the most votes has been released. It was no surprise to see drivers such as Danica Patrick, Clint Bowyer, Ryan Newman, Austin Dillon, and Kyle Larson; but there was one name inside the top ten that no one saw coming - Josh Wise.

Josh has made 79 starts at the Sprint Cup level, with 19th being his best result thus far. He drives for Phil Parsons Racing, a back-marker that start and parked on a regular basis before 2014. So why has Josh suddenly become one of the front-runners for this year's Sprint Fan Vote? The answer is Dogecoin.

Here's the back story - A 16-year-old fan started a campaign on Reddit to sponsor Josh at Talladega, raising $55,000 worth of Dogecoins (it's a cryptocurrency ... Google it). Dogecoin and Reddit were featured on his No. 98 car at Talladega and after running inside the top five for part of the event, he avoided the late-race carnage and snagged a top twenty finish (just the second time Wise has accomplished such a feat).

Now the Dogecoin community is at it again. They have embarked on a crusade to get Wise and the Dogecoin car into NASCAR's All-Star Race, via the fan vote. Danica Patrick is believed to have it all locked up for the second consecutive year, but we shouldn't underestimate the group rallying behind Josh Wise. There are people voting around the clock for Josh, a lot of which aren't even NASCAR fans. Yes, that's right. There are people that have never watched a single race, yet, they are dedicating hours of their days to vote for Josh Wise.

Each racer has their fan bases backing them obviously. Well Josh Wise has his fans, plus the entire Dogecoin community and some other Reddit users. He and Phil Parsons Racing have embraced the support and are having a lot of fun with their new fans. They even replaced their pit road sign with the up-vote symbol used on Reddit.

A supporter went and made a three minute YouTube video, in hopes of encouraging others to vote for Josh Wise. It has 11,000 hits over a four day period. In comparison, a video posted by Go Daddy asking people to vote for Danica Patrick has just 4,600 views after six days.

It's a David vs. Goliath story ... or rather, 'The Shibes' vs. 'Danica Mania.' If their efforts somehow allow Josh to overhaul Danica Patrick and win the Sprint Fan Vote, it will be a tremendous upset and would bring new meaning to the term, 'underdog.'

A year ago on May 16, we lost Dick Trickle

In his own words: Dale Earnhardt, Jr. on the Sprint All-Star race