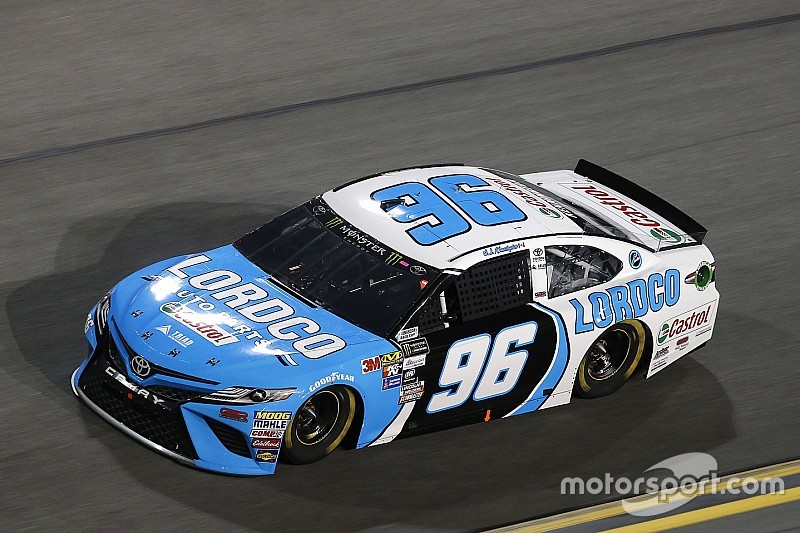 A Christmas party he didn’t feel like going to and an opportunity with a team looking to try and make the race. That is how this all started for D.J. Kennington around Christmas time and then again about one month ago.

Usually the third week of February for Kennington means he’s working long hours at his job in his hometown of St. Thomas, Ontario, Canada so he can take time off to compete in the NASCAR Pinty’s Series during the summer months.

The two-time champion of Canada’s only NASCAR-sanctioned series is doing something a little different this week. He’s starting in the Daytona 500.

Kennington edged Elliott Sadler at the finish line by less than a car length to qualify for the season opener for the Monster Energy NASCAR Cup Series and becoming the first Canadian driver since Trevor Boys in 1988 and eighth overall to start the prestigious event.

Kennington is no stranger to competing in NASCAR national series having made 56 starts in his career including his first Cup start last November in Phoenix, but this one is different.

“I’ve been fortunate to have the same sponsor (Castrol) for 25 years in my career,” said Kennington. “They’re like family to me. I wasn’t even going to go to the Christmas party because I didn’t feel well and my wife said you’re going. So we went and the owner of Wakefield (Castrol in Canada) and he told me that he had my back and to make my dream of making the Daytona 500 happen.”

Kennington said after qualifying for the race on Thursday night that he didn’t even ask for the sponsorship and wasn’t even sure he could get a deal put together fast enough to try and make the Daytona 500.

Without what they've done for me, I wouldn't be here today. I can't explain to you how important they are to me.

Kennington is the first Canadian in 29 years to qualify for the Daytona 500 and will try and top the previous best finish of a Canadian in the race of 10th first set by Vic Parsons in 1973 and equaled by Roy Smith in 1982.

He’ll drive the No. 96 Toyota prepared by Gaunt Brothers Racing based out of North Carolina. Kennington came down and brought members of his NASCAR Pinty’s Series team to help get the car ready to test at Talladega a few weeks ago and then prepare it for Daytona and also help build a back-up car.

“Robby (Benton) and Marty (Gaunt) have teamed up to put together a team that want to run all four restrictor plate races and possibly a couple road courses maybe,” said Kennington. “I started talking to Marty about getting a Triad Engine to run with Premium to make the 500. It all kind of ended up falling together with Marty and myself making a deal to drive his own car. We put it all together I would say within the last month.”

Kennington will start 28th on Sunday in row 14 and fulfill a dream that has been his since he was a young racer in Canada. His car owner Marty Gaunt is also a native of Canada, from Barrie, Ontario.

“The hard part is done, now we can have some fun,” he said.