Did Keselowski and the No. 2 team really win the Talladega race at Charlotte? 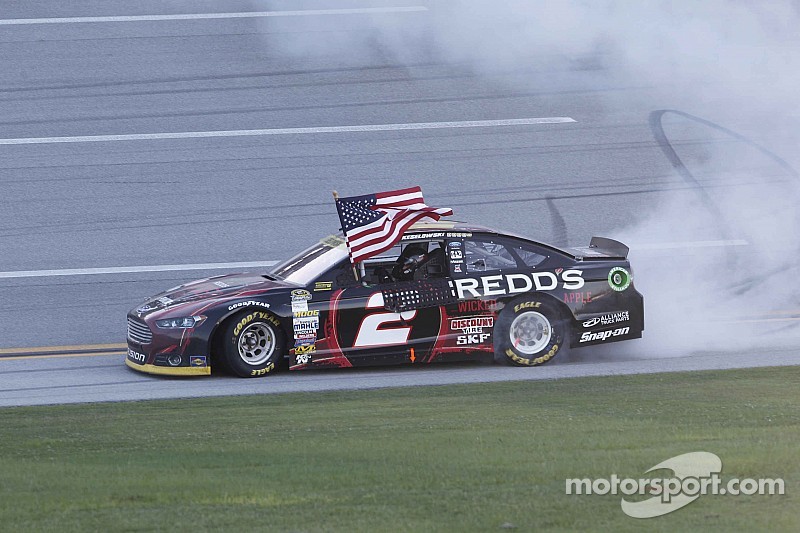 Brad Keselowski advanced to the Eliminator Round of the Chase...

TALLADEGA, Ala.—Against all odds, Brad Keselowski advanced to the Eliminator Round of the Chase for the NASCAR Sprint Cup, capturing victory in a race he had to win on Sunday at Talladega Superspeedway.

To be sure, talent played a role, and talent is something Keselowski has in ample supply.

Focus was a major factor, too. Throughout the week preceding the Talladega race, during a test session at Martinsville Speedway and on Friday and Saturday at Talladega, Keselowski answered questions from reporters in terse, clipped sentences, preferring not to fuel the fire that came to a blaze on the track and in the garage at Charlotte on the previous Saturday night.

Keselowski had his blinders on, and the only point of interest was the finish line at NASCAR’s biggest oval track.

Without a friend in the world

After playing bumper cars with Matt Kenseth and Denny Hamlin at Charlotte, and after getting jumped by Kenseth between transporters after the race, Keselowski was coming to Talladega without a friend in the world.

That, at least, was the conventional wisdom. But it wasn’t the truth.

Self-interest and expediency will trump rivalry

Kenseth, of all people, stayed with Keselowski on the final two-lap run, proving once again that self-interest and expediency will trump rivalry at a restrictor-plate track every time.

The friends Keselowski really needed, however, weren’t driving race cars on Sunday, and it wasn’t the race at Talladega that brought their importance into crystal-clear focus.

That had happened a week earlier at Charlotte, when the No. 2 crew came to the Keseslowski’s defense during the fracas with Kenseth. Crew chief Paul Wolfe, a man of small stature and huge heart, waded into the melee, determined to reach his driver and break up the fight.

“I guess maybe I showed a little side of me that I surprised some people last week,” Wolfe said after Sunday’s race. “But I've told others this week that, at the end of the day, I'd stand up for anyone on this team, including the driver. I believe in every one of them.

“I guess maybe looking at it from that standpoint, yeah, definitely it didn't hurt, and showed that we're going to stick together as a team no matter what happens.”

Team owner Roger Penske likewise demonstrated his unconditional support of Keselowski, even though the driver’s “behavior penalty” for his actions at Charlotte cost Penske $50,000.

“Number one, these guys (other competitors) are jealous of the job he's done this year,” Penske said. “He's won six races. He's (won) poles. He's been up front. Nobody likes to see a guy win like that. The fact that he has a little edge on him, he's continually delivering, obviously I think makes a difference.

“If everybody understood what happened on the racetrack last week, when you get your rear fender knocked off on a restart, you get your front fender knocked off on a pass by, I want him to get mad. I don't want him to take it… If he wants to get a little upset sometimes, that's okay with me. We'll let NASCAR figure out if he's over the line or not.

In fact, Charlotte was the blast furnace that has hardened the resolve of the No. 2 team and directed the them-against-us, backs-against-the-wall mentality toward a higher purpose—the second Sprint Cup title Keselowski covets so ardently.

It also underscored for Keselowski something he already knows.

“I hate comparing myself to other sports, but if you took a football team and said Peyton Manning won the Super Bowl, he would probably think that wasn't right, because everybody had a role in it,” Keselowski said after the race. “Everybody had a role in today. Maybe I have more of a role when it goes bad, but maybe the other guys don't get enough credit when things go good. But everybody plays a part in our success.

“I'm very hesitant to sit before you and say I did this one thing and that's why we're in Victory Lane today because of this, this and that, pat myself on the back. It's not really about that. It's really about us working as a collective group to persevere over countless obstacles and adversity that this sport puts up every week.

“For whatever reason, I seem to need to climb over bigger ones than other people. That's certainly something I don't want to have to do. Like I said before, it makes winning that much sweeter.”

In a very real sense, the crucial victory at Talladega was forged in the fires of Charlotte.

Four races from now, we may well be able to say the same thing about the Sprint Cup championship.

Could Danica Patrick have a new crew chief next season?