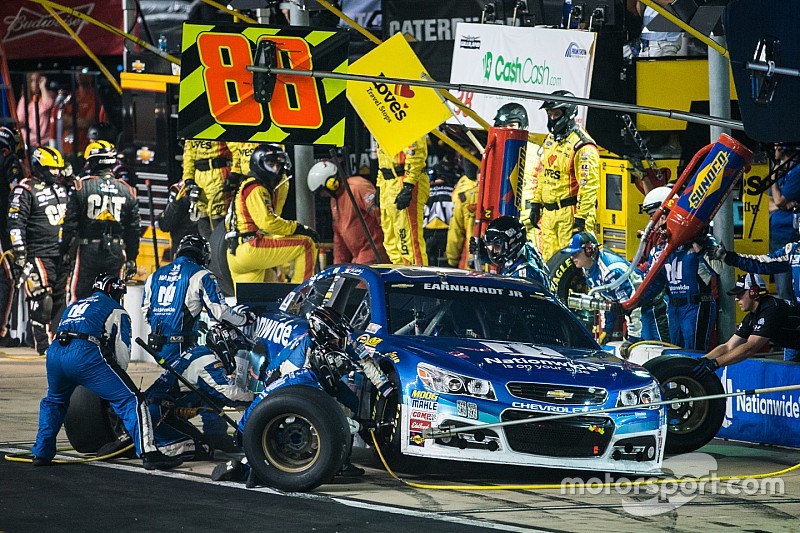 Despite two costly miscues on pit road with loose lugnuts on the left rear wheels at Dover International Speedway, Earnhardt finished third and transferred to the Contender Round on Sunday.

Regardless of the mistakes, the driver has no desire to shake up his crew’s lineup. Prior to last weekend’s race, the No. 88 Hendrick Motorsports team inherited front tire changer Scott Brzozowski, who transferred from the No. 24 car after that crew picked up Nick O’Dell from Joe Gibbs Racing.

On Tuesday, Earnhardt said he hopes Brzozowski decides to stay with the No. 88 team after this season. He believes the crewman’s contribution can be a gamechanger.

“I actually talked to him a bit today,” Earnhardt said. “It’s not like we need too many changes. We just need one key guy that can come in and elevate the standard and push everyone. Over the past couple years, when we’ve had great crews, a lot of the guys that we’ve been working with this year have been on those teams.

“But if you get one guy in there who’s kind of a key player, or a bit of a superstar, like a wide receiver or a quarterback is to a football team, he can really elevate the play of everybody around him and boost the entire crew—just the confidence those guys having going over the wall when he’s a part of it changes the whole consistency of the team.

All those guys that are on my car now are going to be pissed off because I didn’t believe in them, because I took the 48 guys when the going got tough. So I don’t believe in doing that.

“We really want Scott to wrap his brain around staying with us.”

Although Earnhardt recovered on Sunday at Dover to post his 13th top-five finish of the season — tying the second most of his career — the No. 88 team ranked 12th on time spent on pit road. Since the playoffs began, he ranked sixth at Chicagoland Speedway and 21st at New Hampshire Motor Speedway, where he ran out of gas.

Still, Earnhardt believes in his crew.

“I really would like to keep my guys—I’ll be honest with you,” Earnhardt said. “I don’t think you build a guy’s trust… he needs to know you believe in him. The same way for the driver. The driver needs to know the team believes he can do it. I think the carrier the changer, all those guys want to know that the driver and everybody involved believe in them when they go over the wall. If I take the 48 (Jimmie Johnson’s) guys because I think they’re better, then what am I going to do next year?

“I’ll have to start from scratch again. All those guys that are on my car now are going to be pissed off because I didn’t believe in them, because I took the 48 guys when the going got tough. So I don’t believe in doing that. I believe that my guys can do it. I think that we’ll find a combination that works for the rest of the year and beyond.”

Coming off the heels of Hendrick Motorsports announcing Axalta’s move from the No. 24 following Jeff Gordon’s retirement to the No. 88 Chevy, Earnhardt said he’s excited with the prospect of designing a new car — but it likely won’t feature the rainbow of old.

“If that’s what they want to do, that’s what we’ll do,” Earnhardt said. It’s going to be pretty bright — a lot of neon florescent. So it should be a fun little car.

“We’ve come up with some decent ideas so, I like the direction we’re going with the car. We’re mainly working with orange, yellows and reds and sort of having a fade effect on the car. There’s going to be an associate cause Axalta has a lot of associates that they work with. You see that on the quarter panel of Jeff’s car and they’ll be on our cars every time we run the Axalta car…It will be bright. It will be pretty cool.”

Earnhardt says the Pepsico sponsorship will feature a variety of flavors from Mountain Dew, Diet Dew, AMP, Kickstart — and “they will all be different”. But the quarter panel on the non-Pepsi cars will be Mountain Dew.

“They have a whole different way of doing it,” Earnhardt said. “But they’re not backing down any. They’ll have the same amount of paint outs as this year.”

NASCAR restarts: Giving control back to the control car